Anna was four months pregnant, but that didn’t stop her husband – who was on active military duty – from beating her. Months earlier, when she had filed an official complaint after her husband had broken her nose, she was pressured by his superiors to withdraw it. She would “embarrass” them.

“I won’t write any complaint, nothing ever works. Everything is pointless, no one will be prosecuted,” Anna (not her real name) told Amnesty International, which today released a report, Not A Private Matter, after two years researching gender-based violence in state-controlled areas of eastern Ukraine. Six years after conflict began in 2014, the Donetsk and Luhansk regions of Ukraine are currently separated by a 420-km “contact line” into areas controlled by the Ukrainian state and those outside of its control.

What Amnesty researchers found was shocking, from fines as low as bus fares for abusers to under-reporting due to a lack of trust in law enforcement and a deep-rooted shame as a result of societal stereotyping. But there were also some positives, including grassroots movements run by women along the contact line, who give lessons in schools on consent and helping survivors collect evidence.

Amnesty started its research after researchers realised that there had been no comprehensive report on gender-based violence in the conflict zone since 2017, and did not believe the situation had improved, says researcher Nadzeya Husakouskaya. “There was an absence of women voices from the residential areas,” she adds.

In addition to the war with Russia over eastern Ukraine, the country has seen a rise in far-right groups and violence – with gender rights activists facing dangerous situations whenever they hold public events or meetings.

“The (Ukrainian Orthodox) church, as well as other ultra-conservative groups, sees gender as a Western concept,” Husakouskaya explains, “For them, these ‘evil concepts’ undermine their idea of traditional values.”

Husakouskaya, a Belarusian researcher who has studied gender issues for the past 15 years, says the rising interest in these ideas since 2013, when she first conducted research in Ukraine, is daunting.

These ideas, combined with what she describes as a commodification of female bodies (including billboard ads for furniture featuring fragmented women’s bodies and sexist slogans) and a overwhelming belief that a woman’s role is that of a good wife, have led to the chipping away of sisterhood and a deep-rooted shame if “you aren’t a good wife”.

According to a 2018 country-wide study from the United Nations Population Fund (UNFPA), 70% of respondents believe that a woman’s main role is to take care of their families and prepare food. Last year, women’s rights activist Oleksandra Golub told openDemocracy that women are widely stereotyped in the Ukrainian media as financially dependent, “beautiful dolls” or merely “someone’s wife or daughter”.

However, Ukraine has also seen a growing women’s movement, with gender-based violence and women’s rights issues gaining considerable attention over the past five years. Important recent initiatives include the 2017 #IAmNotAfraidToSay movement against sexual violence, an ongoing campaign against sexism in Ukrainian media (RespectPovaha), and the 2019 hashtag #IForgotToAskMarchenko, a reaction to a public official’s sexist comment on how women should dress “appropriately”.

Despite new laws and measures to address gender-based violence, and the rise in women rights activism in the country, Husakouskaya says that “violence against women remains a widespread yet deeply hidden phenomenon in Ukraine.” The situation is even more worrying in the conflict-affected government-controlled regions of Donetsk and Lugansk regions where Amnesty conducted its research.

According to cases documented by Amnesty, women in these areas can be discouraged by the military, and sometimes the police, from filing official complaints of domestic abuse. In some cases, police officers refused to register complaints or persuaded women to withdraw them; in others, women had to call repeatedly for months to get a complaint registered. Even when abusers were found guilty, their punishment was often so low as to be meaningless.

In addition to the hurdles survivors face when trying to report abuse, women in these conflict-affected areas are already living in difficult conditions. There aren’t enough domestic abuse shelters and the military presence and ongoing hostilities add to the normalisation of violence in general – which has also led to a higher fear of reprisal if they choose to report abuse, the Amnesty report says.

Much of the problem lies in the set-up of Ukraine’s legal system. Although Husakouskaya praises positive developments in the national legal framework and provisions to counter domestic violence, the reality on the ground in these regions is quite different. Local judges don’t refer perpetrators to the Domestic Violence Perpetrator Model programmes set up by Kyiv, and local authorities don’t implement the programmes due to lack of resources – both human and financial, or possibly “they do not prioritise these issues”.

Another issue, Husakouskaya says, is the classification of domestic violence: if it is not deemed systematic, it is only an administrative offence.

“Survivors themselves have to prove that this violence has been systematic, which means it has been committed two or more times,” says Husakouskaya. Alternatively, she adds, the violence could be so serious that it falls under attempted premeditated murder or other criminal offences like assualt causing bodily harm. Both survivors and law enforcement tend to treat abuse as a “kind of a family quarrel,” she explains. The system also clearly prioritises the perpetrators, instead of the survivors, she says.

“Those who design and implement policies and laws might not have a very clear understanding of how gender-based violence works, how domestic violence works, and what the circle of violence is,” she explains further. “They don’t seem to grasp how hard it can be to report abuse, for different reasons, including economic dependency.”

Although Amnesty’s research exposes some very serious shortcomings in the protection of women in the government-controlled eastern Ukrainian regions, they also came across some “surprising” findings: grassroots activists trying to fight back.

Slavic Heart is one of them, a movement started by internally displaced women in Sviatohirsk, which has since developed into a full-blown women’s rights organisation. Initially, the women organised around war-related issues and the challenges they were facing in terms of allocation and resources. But when Amnesty appeared in 2019, the group had developed into a women’s rights organisation, including a gender-based violence coordinator. 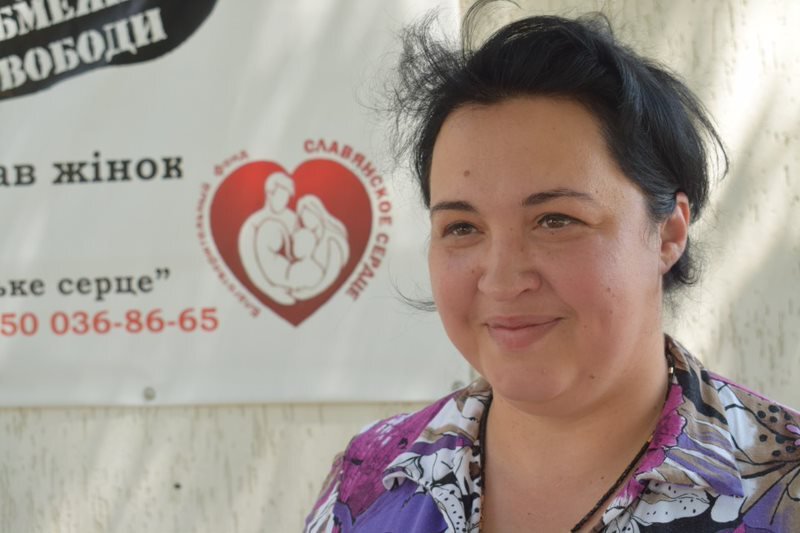 Other movements that came as a positive surprise to Amnesty were local outfits in small residential communities along the contact line in eastern Ukraine.

“You usually think of feminist activists as being 20-year-old women, but all these women, they were in their thirties and forties,” says Husakouskaya. The researchers were surprised to find married women with children taking action because they couldn’t bear to watch what was happening to their communities any longer. The women realised that the authorities were failing to provide support, and went into schools to teach pupils about their rights in case of domestic violence, consent in relationships and what non-violent relationships could look like.

“These women became activists out of experience and necessity. They don’t want to leave where they live, but they also don’t want to live like that anymore,” says Husakouskaya.

Amnesty International hopes that with its research, national policymakers will take into consideration the situation on the ground in these regions, including the voices of women who live there,- so that any newly proposed policies will actually be effective in combating domestic violence everywhere.

“We have high hopes that our research will be used by different groups, to jointly or separately lobby or change the situation for women’s rights,” says Husakouskaya.