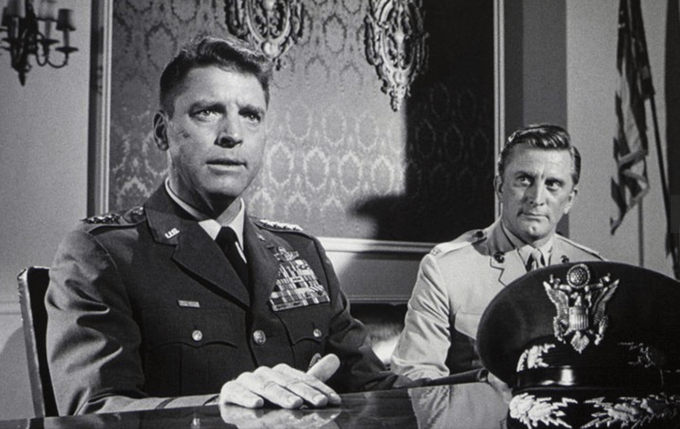 Still from Seven Days in May.

One of the occupational hazards of a 24-year career as an intelligence analyst at the Central Intelligence Agency is the tendency to anticipate the dark side.  Whenever I see a floral arrangement, for example, I expect there to be a corpse nearby.  Now if I were still an intelligence analyst at the CIA and watching events in a Third World democracy that resemble the goings on taking place in the United States of America, I would be deeply concerned.

Let’s start with a president (Donald Trump) who suffered an unexpected election loss and decided to use his political party (the GOP) to contest the results, thus far without any sign of success.  The president then brings the power of the government into his scheme.  He orders his enabler-in-chief (Attorney General William Barr), who happens to be the country’s senior law enforcement officer, to have his Election Crimes Division search for (non-existent) evidence of crimes in the electoral process.

The veteran head of the division (Richard Pilger) immediately resigns his post to protest the unprecedented use of the Department of Justice to search for evidence rather than respond to charges based on evidence.  State officials—both Democrats and Republicans—emphasize there is no substantiation for such charges.  Federal judges—appointed by both Democrats and Republicans—have rejected all cases that have come forward.

The replacements for all four of these men are very junior, very unqualified, and very loyal.  The intelligence advisor, for example, (Ezra Cohen-Watnick) is particularly incompetent, but has the backing of the president’s prodigal son-in-law (Jared Kushner).  The new chief of staff (Kashyap Patel) is a former aide to a congressman (Devin Nunes), who denied ample evidence of presidential perfidy over the past several years.

The new senior policy adviser (retired general Anthony Tata) is the worst of the lot, having encountered bipartisan opposition to confirmation several months ago because of his bizarre conspiracy views that marked him as a serious whack job.  These remarks included the branding of former president Barack Obama as a “terrorist leader,” and the linking of the former CIA director (John Brennan) to an assassination plot against the president of the United States.  Tata’s appointment, by the way, violates various succession laws because he isn’t qualified to be serving in an acting capacity in a position that requires congressional confirmation.  Of course, the president has been observing these norms and laws in the breach for the past several years when so many senior policy officials in the foreign policy and national security fields serve in an acting capacity.

At the government’s most sensitive intelligence collection agency, the National Security Agency, the general counsel, who is a legal and intelligence professional, is suddenly replaced by a political acolyte (Michael Ellis), who is also beholden to the corrupt president and the corrupt congressman (Nunes). We know from the CIA whistleblower that Ellis tried to hide evidence of the president’s illegal conversations with the Ukrainian president in order to smear a political opponent, the eventual winner of the presidential election.

Meanwhile, the president’s secretary of state (Mike Pompeo), who happens to be the country’s senior diplomat, ignores the results of the election and predicts a smooth transition to a second term for the defeated president!  Pompeo, like Republican Party loyalists, sing the familiar refrain that “any vote that was’t legal ought not be counted.”  The fact that there is no evidence of illegal voting is ignored by all of these individuals.  Heads of state around the world begin calling the president-elect, similarly ignoring the U.S. secretary of state.

At the same time, other political appointees such as the intelligence tsar (John Ratcliffe) and the government’s property manager (Emily Murphy) are denying essential intelligence briefings and government funding, respectively, to the winner of the election.  The fact that this obstruction could cause a national security problem to the nation is of no interest to the president or his party, which commands the senior legislative chamber.  Thus far, senior departmental and agency officials are refusing to cooperative with liaison teams from the president-elect, creating another political problem.

Thus far, the mainstream media are attributing these moves to presidential anger or score-settling or simply a propensity for stealing the thunder of a political opponent perceived as too weak to be anything but a political loser.  But what if the situation is far more serious?  What if the president is indicating that he has no intention of giving up his base of power?  What if…….?  Certainly, if I were the intelligence analyst for such a country, I would be obliged to inform my own principal officers, possibly including the president, of such intelligence speculation.

I’m not saying that the president is in the early stages of planning a more serious challenge to the results of the election, to include a coup.  But I am saying, on the basis of 24 years in the intelligence vineyards, that Bayesian analysis, a useful intelligence tool, points in the direction of continued presidential planning. Bayesian analysis deals with probabilities, not necessarily outcomes.  It isn’t based on the frequency of events or decisions, but on the probability that in order for a coup to take place then we are likely to see such actions as predicates. It is a particularly useful tool for assessing the value of new data.

Bayesian analysis or probability was particularly useful at CIA in the 1960s to anticipate the Sino-Soviet split before academics and think tank specials did so.  And it was useful to argue against a Sino-Soviet war in the 1970s, when policy officials, including Henry Kissinger, thought so.

Once again, I’m not predicting or anticipating a coup in this country.  But I am concerned that a narcissistic president is taking revenge against his own government for failing him.  We need to know why the president is taking so many provocative actions that require a better explanation than what we have so far been given.

The post Revisiting “Seven Days in May” appeared first on CounterPunch.org.