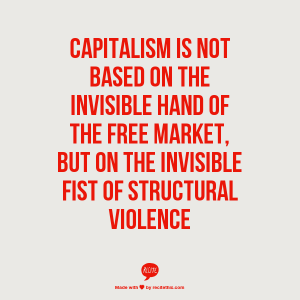 A recent analysis by Harvard geneticist Stephen Elledge tabulated the number of years that Americans who died from COVID-19 might have lived had they reached a typical life expectancy. The shocking answer is that the coronavirus  has claimed more than 2.5 million years of potential life in the United States since 2020. And despite making up only one-fifth of the total recorded deaths from COVID-19, people under age 65 accounted for 1.2 million of potential years lost. A follow-up study now underway using race and ethnicity will very likely show young Black and Latinos having lost substantially more years than younger white Americans.

Setting aside the pandemic for the moment, we can extrapolate that a similar type of analysis could be undertaken to calculate the number of years of life lost for Americans who die prematurely from the normal, everyday functioning of capitalism in this country.  Those consequences can be classified under what Norwegian politician scientist Johan Galtung termed “structural violence.” Looked at this way, structural violence is “the increased rates of death and disability suffered by those who occupy the bottom rungs of society.”

Violence is usually thought of as damage to, or loss of life from, avoidable and external causes and direct violence takes the form of acts perpetrated against specific individuals. One can identity the victims, agents, intentions and means of direct violence. In contrast, whenever persons are harmed, maimed or killed by poverty and unjust social, political and economic institutions, systems or structures, we speak of structural violence. Structural violence, unlike armed violence, can have two effects — it either kills its victims or harms them in various ways short of killing.

Put succinctly, when the global society or a national society’s means of survival, from jobs, food and medical assistance are concentrated in the upper class, the majority of the population has a life expectancy lower than necessary.  And for what follows, it’s important to stress that structural violence lacks a visible person committing an intentional act of excessive violence to whom responsibility may be assigned. Rather, it results from the underlying unequal distribution of power and resources.

Structural violence measures the gap between the actual and the potential, that is, a society without the national repressive structures. When such measurements have been taken on a global scale, the results are staggering in that the number of fatalities from structural violence were found to be seventeen times greater than from direct civil and international violence and cause ten times more than homicides, suicides and warfare combined. And if commonly accepted estimates by the World Health Organization and other sources are correct, between now and 2030, 56 million children under the age of 5 will die from poverty and wholly treatable causes. Their fundamental right to live out their lives will be violated.

Structural violence, according to Harvard public health expert Paul Farmer, is a “broad rubric that includes a host of offenses against human dignity…ranging from racism to gender inequality…[to] extreme and relative poverty.”  It advances not unlike an invisible virus that lays waste to a patient’s immune system by means of political-economic processes.  Although less visible, structural violence is by far the most lethal and widespread form of violence that would not occur within a more equitable society. Therefore, it’s one of the most critical areas of violence studies meriting further investigation in our time.

Because health, gender, economic and racial disparities are affixed deep within society’s structure itself, they tend to go unnoticed  and normalized as just among the routine problems of life. The underlying inequality accounting for marginalized people’s susceptibility to infection, illness and premature death is virtually invisible, lending the conveniently false impression that irresponsible personal behavior is the culprit. The upshot here is that “economically driven processes and forces conspire to restrain individual agency. Structural violence is visited upon those whose social status denies them access to scientific and social progress.”  That is,an important distinction is that overt/behavioral violence like police executions of Black citizens, ICE locking children in cages or the conscious restricting of the economy to immiserate workers is easy to discern and episodic. Structural violence is steady, insidious, covert and exponentially far exceeds the visible form.

Structural violence permeates U.S. society. It’s inherent in the country’s governance and major sectors of the population have suffered under neoliberalism with its celebration of rugged individualism, inequality and the free market. Identifying and publicizing its gruesome consequences would make it obvious that structural violence could be mitigated by a different allocation of national resources. Indeed, an Economic Law of Life is operating here under which the amount of structural violence, including life expectancy is, to a high degree, a function of the country’s wealth and income distribution. Wealth buys life.

Put another way and writing specifically about the United States today, economist Paul Wolff maintains that “Pandemic capitalism distributes death in an inverse proportion to wealth and income… so that unequal income distribution finances unequal “natural” outcomes.” Wolff continues that when private profit trumps public health, “a half million of us die, sort of like a “natural” car accident.  Clarifying this would allow what is now normal to be totally loathsome. Most important, it all materializes from the “normal” textbook operation of liberal democracy and the market system. The complicity of the duopoly that enables structural violence to continue unchallenged would also be exposed for its illegitimacy.

U.S. officials talk about incremental change and celebrate nonviolence but this conceals massive structural violence and a status quo of silent suffering and peacefully secure cemeteries.  That is, untold millions of years of life expectancy are being lost each year in the United States because of the economic injustice of the capitalist system. However, as Farmer explains, these ideas “provoke discomfort in a moral economy still geared to pinning praise or blame on individual actors.”  As such, people cannot absolve themselves with righteous proclamation like “I have never and would never engage in or support violent behavior toward another human being,” because the culpability for structural violence lies with those who support the system giving rise to it.

One way to approach this is to measure  the general population’s potential life expectancy in the United States versus its actual life expectancy owing to factors such as economic deprivation, access to health care, denial of  opportunities, institutional racism and marginalization. Going further, the critical breakdown would include  examining the qualitative  effects of structural violence on marginalized communities in the United States.  A team of activist academics, led by Prof. Rakhshanda Saleem and a team committed to furthering social justice, has undertaken just such a much needed research project.

The project’s initial  focus is on multiple groups with marginalized identities and it highlights the intersectionality of their experience with structural violence. Not everyone will agree and there are different variables at work,  but given the bleak future of young millennials, I would add them to the usual mix of racial, ethnic and other categories. They are unanticipated victims of structural violence but may not even see themselves in this way. However, there’s an undeniable and logical connection between how normal neoliberal capitalism operates and the structural violence in which millions of millennials are ensnared.

Although his capitulation ultimately tore out their hearts, roughly 10 million beleaguered and bitter Millennials embraced Bernie Sanders  because they realized they were being shafted by the Lords of Capital. Today, they could  declare, “It’s not the pandemic, stupid!  It’s the pandemic under economic inequality.”  In sum, what is so exciting about this research is that an “intersectional perspective that promotes solidarity across struggles needs to be advocated” and the groundwork now exists.

Finally, beyond the episodic public protests against egregious acts of overt violence, there is a largely invisible, insidious, and relentless class war taking place. Below the 1-2 percent who own the nation’s wealth, including 705 billionaires with more wealth than the bottom half of the population are the 17-20 percent who administer the system and are richly rewarded for their role. Below them, we find the 80 percent, the working class that actually produces all of society’s good and services. A close analysis of structural violence can serve to heighten awareness of the advantages of the disparate groups in the third category who are victimized, subordinated and played off against one another by the  same enemy, to join in a struggle against a system that’s destroying their common welfare.

This article was posted on Friday, November 13th, 2020 at 7:08am and is filed under Capitalism, Classism, COVID-19, Health/Medical, Violence.