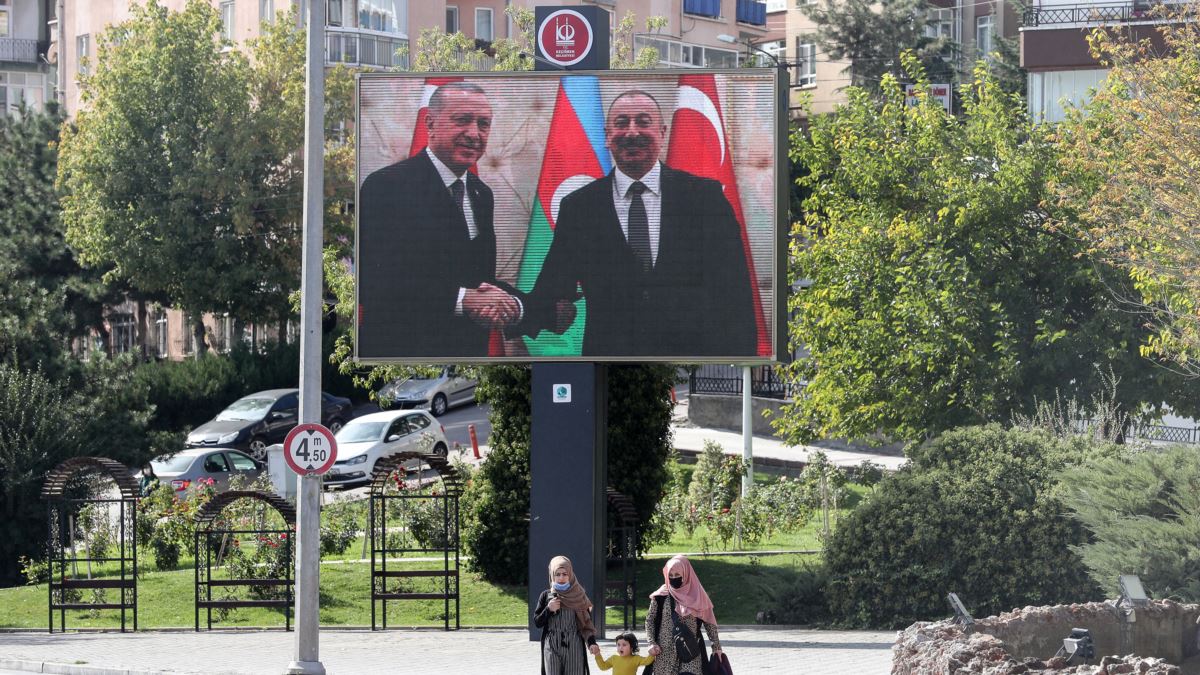 The Turkish parliament has passed a resolution to send troops to monitor a Russia-brokered peace accord between Azerbaijan and Armenia.

Parliament passed the motion on November 17 with the support of all but one party after President Recep Tayyip Erdogan put forward the request to send troops to a planned monitoring center in Azerbaijan.

Turkey, which backed Azerbaijan in a six-week conflict with ethnic Armenian forces over the breakaway region of Nagorno-Karabakh, signed a memorandum last week with Russia to create a joint monitoring center in Azerbaijan.

The resolution grants a one-year mandate to deploy Turkish soldiers and civilian support to a joint monitoring center “at a place Azerbaijan will determine” and in line with strategic agreements between the two countries.

The state-run Anadolu news agency said the resolution highlights that Azerbaijan requested a joint Turkish-Russian presence at the monitoring center.

It also gives Erdogan broad authority to determine the timing and size of any deployment.

The accord allows Azerbaijan to keep a sizable chunk of the mountainous region, as well as all of the area ringing the enclave. Around 2,000 Russia peacekeepers will be deployed to maintain security in the territory for a period of five years.

Russian officials have said that Ankara’s involvement will be limited to the work of the monitoring center on Azerbaijani soil, and Turkish peacekeepers would not enter Nagorno-Karabakh.

France, which along with the United States and Russia, co-chairs the Minsk Group that has spearheaded talks in the past between Armenia and Azerbaijan, urged Russia on November 17 to clear up “ambiguities” over the accord it brokered.

“The cease-fire was essential to save thousands of lives. But there are ambiguities,” French Foreign Minister Jean-Yves Le Drian told parliament.

He specifically mentioned the issue of refugees, the delimitation of the cease-fire, the presence of Turkey, the return of foreign fighters, and negotiations of over the final status of Nagorno-Karabakh.

Le Drian added that these issues would be discussed at a meeting of French, U.S., and Russian diplomats in Moscow from the Minsk Group on November 18.

The U.S. State Department backed France’s view, saying there were still questions that the Russians needed to clarify about the deal, “and that included the role of the Turks.”

The United States and France have suspected Turkey deployed Syrian rebel mercenaries to support Azerbaijan amid multiple media reports of their presence on the battlefield during the six-week conflict with ethnic Armenian forces.

Nagorno-Karabakh is recognized as part of Azerbaijan, but the ethnic Armenians who make up most of the population reject Azerbaijani rule.

They have been governing their own affairs, with support from Armenia, since Azerbaijan’s troops and ethnic Azeri civilians were pushed out of the region in a war that ended in a cease-fire in 1994.

Fighting broke out in and around Nagorno-Karabakh on September 27, killing more than 2,000 soldiers and civilians on both sides over the ensuing weeks. Azerbaijan has not provided a figure for its military casualties.

With reporting by AP, AFP, Reuters, Sabah, Cumhuriyet, and Anadolu