Large gatherings do not find favor, during this plague-haunted time, with regulatory and administrative officials. However, increasing consciousness of indigenous peoples’ rights, recognition that the land management practices of the dominant culture are failing, and their own deep desires for the restoration of historic salmon visitations to our coast, persuaded the BLM and the Humboldt County Health Department to permit a Salmon Return Ceremony at the mouth of the Mattole River on November 12th.

The Bear River Tribe hosted the event, in answer to a plea from the Lost Coast League. Preparations, in keeping with the Health Department protocols, were demanding. There could be no fire, and the ceremonial dinner must be created in a regulated facility, wrapped in plastic. Then, at the last minute ,government decree shortened the event from four to two hours. 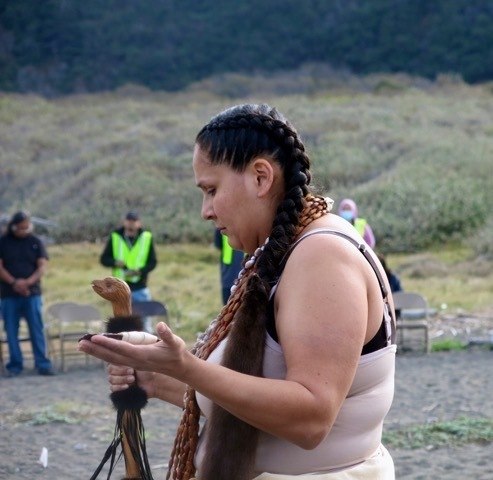 Over a century ago, the indigenous inhabitants of the Mattole were almost completely exterminated by a combination of government policy and white settler land greed. However, in a situation that lasted for a couple of generations, survivors were frequently relocated to stockades and reservations, together with fragments of other tribes, such that the modern membership of many of these tribes has Mattole ancestry. In 1910 the Bear River Tribe was constituted entirely from these fragments of homeless and landless indigenous people. Some of their descendants can remember pieces of stories and myths passed down through their family history, which, when fitted together, have enabled them to recreate a welcoming Salmon Ceremony, last performed at the Mattole estuary, in 1903.

Though there was frost, many Bear River tribal members camped the night before the ceremony at the Mattole Beach campground, together with BLM and the Lost Coast League. The young members of the BLM staff were animated, appreciative, and assisted anywhere they could be helpful. Contrary to weather predictions, dawn was glorious, and huge ocean waves tossed writhing masses of brown kelp on the beach, over the diminishing strip of sand that bars the estuary from the ocean. Fresh bear tracks and deer tracks were all around the ceremonial circle in the first daylight, and coyotes sang arpeggios from the north bank of the river. 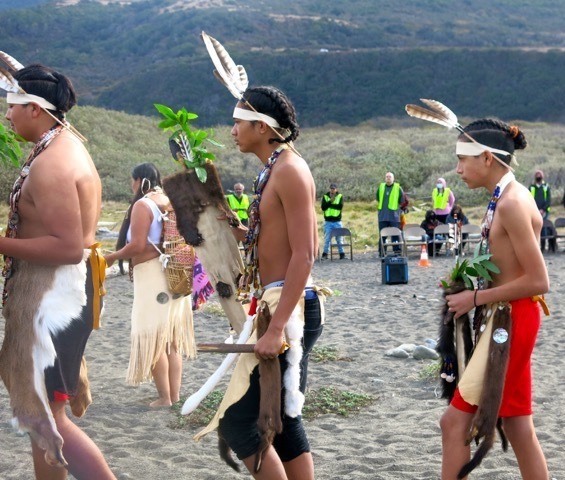 By the time for the ceremony the air had become balmy. Little children could play in the driftwood and splash along the edge of the estuary. An audience of observers lounged in socially-distanced radiating circles on the sand. Those who had received invitations, the numbers of which were strictly limited by the Health Department, sat in a closer ring .

Wheeling white seabirds rose and fell over the estuary, as Tribal Vice Chair Edwin Smith and

Natural Resources Director Hank Brenard gave brief histories of the ceremony, described plans for co-management, with federal and state agencies, of coastal fish populations. Michael Evenson, chairperson of the Mattole Salmon Group, and Jim Bowie, Fisheries Specialist for the Bear River Band, discussed the dwindling fish populations and the 40 years of restoration efforts that many attendees had made a principal objective of their lives in the Mattole.

Then, in the breathless silence of participants and observers, the dancers came, in a long file, through the dunes to the circle. Their elk-skin garments and brilliant abalone regalia sparkled,

and made music with the white conical shells on their necklaces. The Medicine person, Ruth Wortman, her baby on her back in a traditional hazel basket, danced in a long, slow circle around the entire group, creating a sacred space, waking the spirits and calling them to attend from the four directions.

There were five male dancers and ten women. Some were children. Edward Bowie sang five songs, appealing to the salmon runs waiting nearby offshore, in a slow crescendo, each separated from the next by a cascade of notes down his range. Participants stamped the ground with their left feet, as required in a kick dance, and the dancers kept time with elderberry clappers.

Then the Medicine person, after placing a piece of angelica root on the place the fire would have been, in a mellifluous voice which floated out over the estuary, sang the Coming Home song for the salmon, in repeated intervals of a fifth (pictured in the short video). Although in a strange language, the singer’s passionately earnest enunciation of the words, reaching the entire group of two hundred or so, seemed to convey an appeal to the salmon, in tones of entreaty, asking for forgiveness. 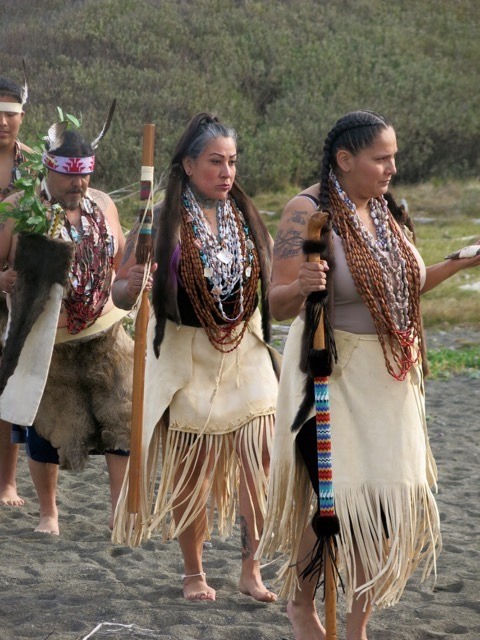 After eating the ritual meal of nettle soup, acorn mush and salmon, participants threw their salmon skin and bones into the estuary as a tribute of gratitude.

In the last half-century watershed restoration science has done its best, and millions of dollars have been spent, opening sloughs, fortifying erosive banks, building shade structures and planting vegetation, in an attempt to call the salmon back to the Mattole. However, over that same period of time, living conditions for fish at sea have deteriorated, and intensely extractive industries continue to operate in the watershed, contaminating the waters. Critically important tributaries remain behind locked gates. Apart from one hopeful year, the returning salmon persist but have not recovered.

It was time, then, to incorporate the spiritual with the scientific approach to restoring the health of the watershed. Together with a time-honored and much- welcomed spirituality, the Bear River Band brought a concept of reciprocal relationship with the environment, which they have maintained faithfully over the terrible decades since colonial settlement. The Sister Rocks speak, and carry messages down the coast, as they have for time immemorial in myth and story.. Human health, spiritual and physiologic, is tied to the company we keep, our habitat.

This is a philosophy which is unfamiliar to many, in today’s materialistic and scientific world. As Claudio Saunt remarked in his book “The Unworthy Republic”,

“The idea that we might listen to the environs around us, and that the plants and animals might ask something of us, is conflicting at best, heretical at worst”.

However, the government of California, which in 1851 prescribed extinction for its indigenous populations, has recently apologized, and allocated half a million dollars a year to repair relationships with the tribes. This must initiate a general recognition that the adoption of an indigenous philosophy, of reverence for the earth and the web of life of which we are a part, may deflect the legacy of climate collapse, catastrophic fires, disease, floods and droughts currently threatening us. The Mattole Salmon Ceremony comforted everybody with the hope that balance can still be restored. 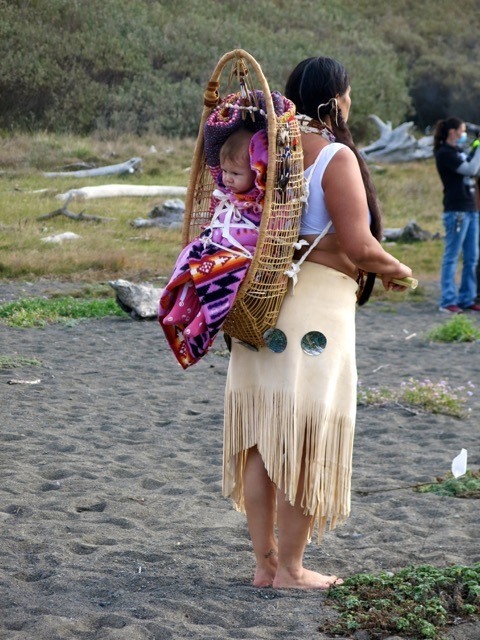 All photos by Sandy Tillis.