Though former Vice President Joe Biden made climate a priority in his campaign and reportedly plans to make it a centerpiece of his administration, who the president-elect chooses to fill his Cabinet over the coming weeks will determine how his White House actually addresses the climate crisis. Climate activists are, of course, focusing on the potential leaders of the Energy and Interior Departments and the Environmental Protection Agency, but they are also pushing for a wider vision of what climate-conscious national leadership should look like.

Seriously addressing the crisis will require more than sound pollution and public lands policy, and organizers are moving fast to push for climate-serious appointments to an array of positions not traditionally associated with environmental action. They are casting a spotlight on the position of treasury secretary, which holds significant untapped power to address the climate emergency.

Financial regulatory agencies “have arguably the legal authority to shut down fossil fuel financing at the banks and asset managers and insurance industries,” said Brett Fleishman, associate director of fossil finance campaigns for the environmental group 350.org. “That’s our big goal.” The treasury secretary in many ways sits at the helm of those agencies.

350.org is a member of a climate coalition called Stop the Money Pipeline, which aims to pressure banks, asset managers, insurance companies, and institutional investors to stop funding fossil fuel companies. The group recently sent the Biden administration a rubric for evaluating treasury secretary picks on climate, including that they demonstrate a willingness to pull the regulatory levers available to address climate and that they have no recent history of working for the fossil fuel industry.

It’s the financial regulatory agencies’ long-term inaction on climate that leaves proponents of grand climate-related action skeptical of establishment names that have been reported as possible Biden picks. One frontrunner, the moderate Janet Yellen, a former Federal Reserve chair, is a founding member of a climate action coalition — which sounds promising until one realizes that the group was co-founded by fossil fuel firms themselves. Lael Brainard, a member of the Federal Reserve’s Board of Governors, has commented on the economic risk climate represents, but hasn’t pressed the Fed to take significant regulatory action.

Sen. Elizabeth Warren, D-Mass., is a climate activist favorite, but she would need to vacate her seat in the Senate. Sarah Bloom Raskin, who was deputy treasury secretary under President Barack Obama and also served as a member of the Fed board, appeared on the Sunrise Movement and Justice Democrats’ wish list beside Warren — and testified last spring that the Fed was not taking climate seriously enough.

Federal Reserve Board of Governors member Lael Brainard listens to a presentation during a board meeting on Oct. 30, 2015, in Washington.

The emphasis climate organizers are putting on appointments outside of environmentalists’ traditional lanes reflects the growing severity of the crisis and the gradual popular realization that modest reforms won’t staunch the bleeding. It’s a realization at the core of congressional progressives’ ambitious Green New Deal proposal, aimed at reducing fossil fuel emissions while using environmentally geared policies to foster economic equality.

“The genesis of the Green New Deal is the idea that the entire economy is going to be impacted by taking the climate crisis seriously — that to reduce and reverse climate change, it’s going to take an all-of-government and all-of-economy response,” said Jeff Hauser, founder of the Center for Economic and Policy Research’s Revolving Door Project, which focuses on keeping profiteering out of executive branch appointments.

“To reduce and reverse climate change, it’s going to take an all-of-government and all-of-economy response.”

With no strong Democratic majority in the Senate, even if Democrats win both runoff elections in Georgia and even out the chamber, swift passage of Green New Deal legislation is unlikely. Organizers are determined, then, that aggressive climate action will have to come from the executive branch. Considering the potential that Republicans may attempt to block confirmation of ambitious appointees, getting the right people in may require creative means such as the Vacancies Act.

This week demonstrated why climate organizers have cause to worry. The appointment on Tuesday of Rep. Cedric Richmond, D-La., to head the White House Office of Public Engagement was a bad sign from Biden. Richmond is a top recipient of fossil fuel industry campaign donations among House Democrats and has repeatedly supported fossil fuel-friendly legislation. Activists have also raised alarm bells about indications that Biden may select as energy secretary Ernest Moniz, who joined the board of Southern Company, an electric utility that has sued the EPA over climate policy, after exiting his previous run as energy secretary under Obama. And for the role of agriculture secretary, former Sen. Heidi Heitkamp, who played a key role in lifting the crude oil export ban, has emerged as a potential pick.

Being slightly better on climate than the last Democratic administration, in which Biden served under Obama, will not cut it, Hauser said: “If you’re trying to be historic” — which is what the climate crisis requires — “you will have to be very aggressive.”

How the Treasury Can Act

What climate organizers want from the Treasury Department is simple: action. For too long, activists say, powerful executive branch agencies have had tools at their disposal to mitigate climate disasters but failed to use them.

Climate disasters — more frequent and severe storms, droughts, and wildfires — are already wreaking havoc on the economy and destroying homes, businesses, and communities. There’s also a financial bubble hanging over the national economy — a multitrillion dollar carbon bubble that could rival or surpass the mortgage bubble that precipitated the Great Recession. Behind it is the money that lenders and investors continue pouring into fossil fuels: In order to see a return, oil, gas, and coal would need to be extracted and burned for far longer than is safe for the climate and even longer than the market itself would likely allow.

There’s a multitrillion-dollar carbon bubble that could rival or surpass the mortgage bubble. In short, the banks are fueling the climate crisis.

Economists predict that without government intervention, the inevitable transition away from fossil fuels will cause the bubble to burst, leaving investments stranded with no profits to be found, hurting pensions, causing job losses, and damaging every sector of the economy — on top of the havoc wrecked by storms and fires. The risk only increases as more money is poured into new fossil fuel investments: Unlikely to deliver returns, the investments would only encourage more greenhouse gas emissions. In short, the banks are fueling the climate crisis.

For the climate organizers, the threat created by the carbon bubble is a perfect target for the Treasury Department. Fleishman, of 350.org, pointed to the Dodd-Frank Act as a lever the incoming treasury secretary will need to pull to address the problem. 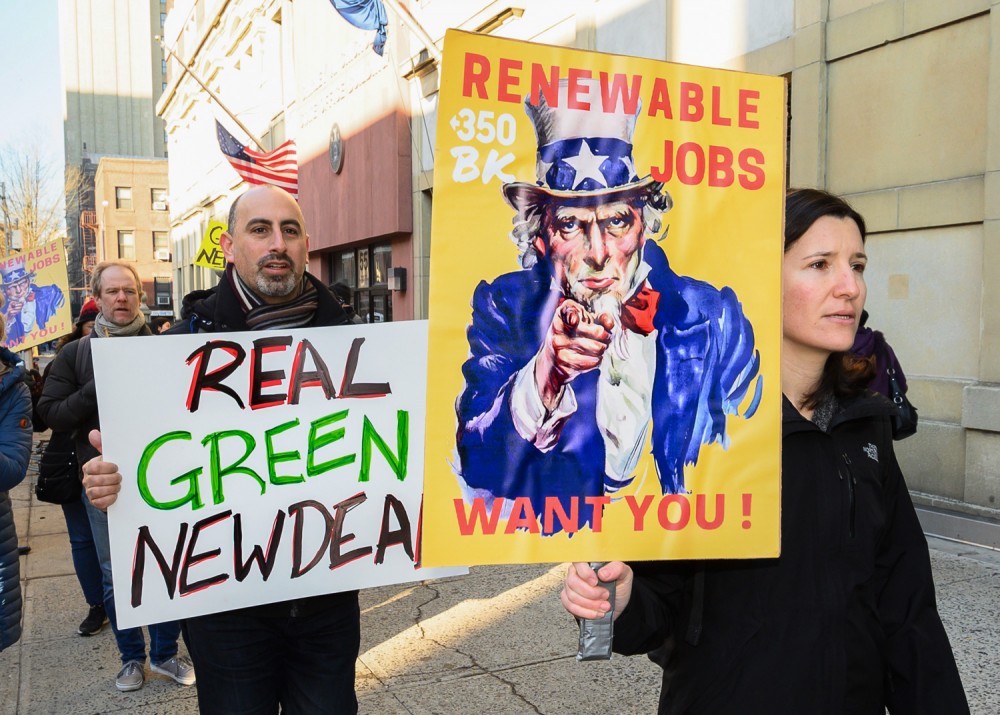 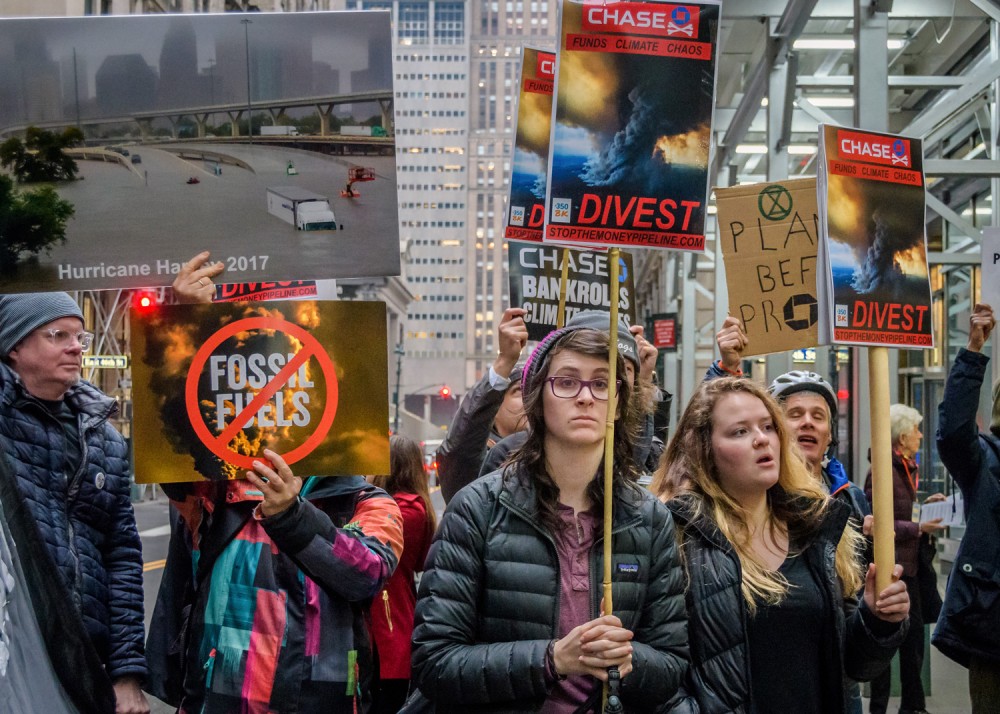 To some degree, Dodd-Frank was built for a moment like this. Passed in the wake of the mortgage bubble popping, the legislation created the Financial Stability Oversight Council, a body chaired by the treasury secretary that brings together all the other financial and regulatory agencies to examine risks to the economy. The council has the power to compel the Fed and other agencies to create new regulations if a particular type of activity or institution creates a big enough threat to the economy.

According to a report by Graham Steele, director of the Corporations and Society Initiative at Stanford Graduate School of Business, there are a few ways the Financial Stability Oversight Council could address the climate crisis. The lowest bar would be for the council to press regulatory agencies to mandate climate stress tests of banks — assessing the banks’ stability against hypothetical climate scenarios, such as temperature rises of 4 degrees versus 8 degrees. This would force banks to begin considering their own self-interest as they make investment decisions.

Stress tests, however, are only a first step. Without rules that force banks to divest from fossil fuels if the stress tests fail, they have the potential to amount to greenwashing — allowing banks to posture as being environmentally friendly by submitting to the tests but without taking action. A second tier of regulatory agency pressure could involve regulators adjusting calculations known as “capital ratios.” Essentially, the Financial Stability Oversight Council could tell regulatory agencies to require that banks set aside a higher proportion of capital than they do now every time they invest in or lend a dollar to the fossil fuel company. It would mean fossil fuel investing would be more expensive and the return on investment would thus be smaller. It’s another market-based approach that would make it less worthwhile for the banks to choose to fund polluting industries.

Of course, the most meaningful climate policy that the Financial Stability Oversight Council could put in place would be to give banks no choice and put hard limits on how much they can invest in fossil fuels.

Thus far, the Financial Stability Oversight Council has done nothing on climate — an example of why climate organizers are pushing for appointees that would be willing to take the steps available to them.

Legislation aimed at coronavirus pandemic relief and recovery, such as the CARES Act, offers another opportunity for the incoming treasury secretary to put Green New Deal policies quickly into practice.

“We’re trying to align the key players on the field in the right places.”

So far, Trump’s administration has poured billions of taxpayer dollars into propping up the oil industry during the pandemic. The Revolving Door Project noted that Brainard, in her role at the Fed, voted in favor of lending criteria that would allow more pandemic relief money to go to the fossil fuel industry. For her part, Raskin wrote an op-ed in the New York Times criticizing the Fed for using recovery money to make the dangerous fossil fuel investments.

Stop the Money Pipeline’s short-term goal for the Biden administration is to flip the pattern on its head: for Cabinet members to direct recovery funds toward projects that get a bang for their buck by boosting the economy and address the climate crisis simultaneously. A huge quantity of CARES money has gone unspent, including most of the $500 billion associated with a program called the Municipal Liquidity Facility, designed to support local governments. Fleishman would like to see that money directed toward jobs programs for building green infrastructure.

Organizers are ultimately envisioning an even larger role for agencies like the Treasury Department. Fleishman offered a possible future in which a big public bank or investment authority, potentially funded by the Fed and managed in part by the treasury secretary, would be necessary to finance even bigger Green New Deal projects. Filling important roles today would help build a bench of capable, experienced appointees for such future endeavors, he said. “We’re trying to align the key players on the field in the right places.”