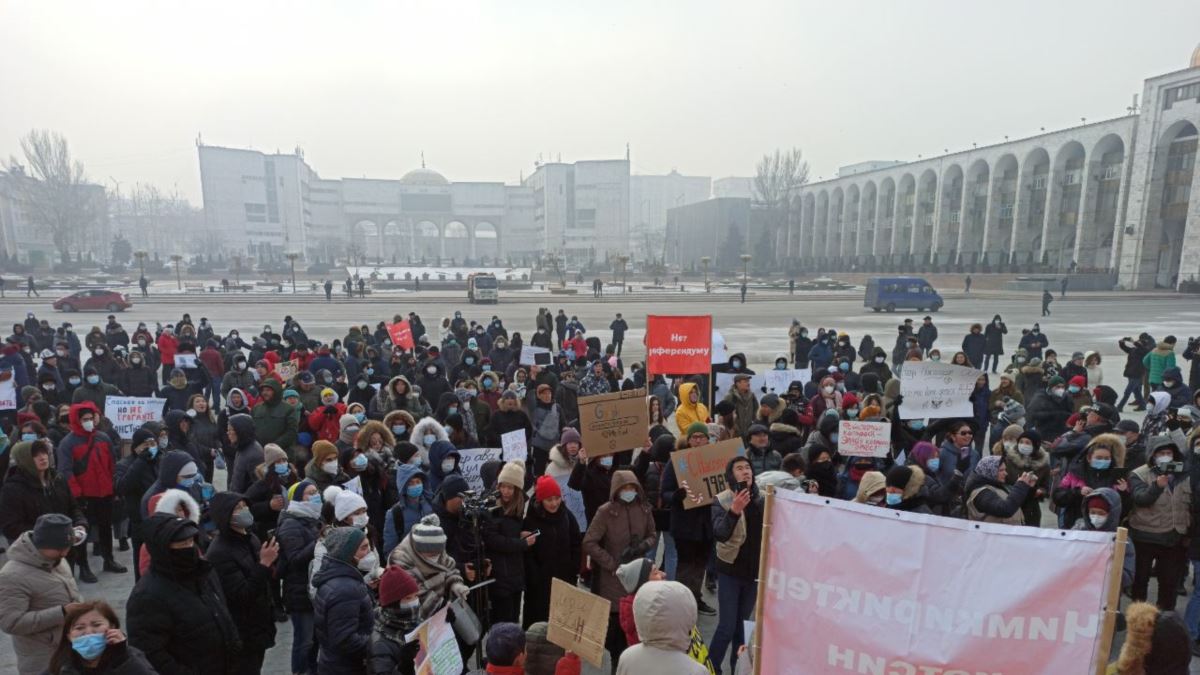 The November 22 rally was the latest development in the ongoing political turmoil that erupted after October 4 parliamentary elections.

The disputed elections, and the violence that followed, led to Sadyr Japarov emerging as prime minister and acting president in a series of maneuvers that outside observers have condemned.

Japarov has pressed the outgoing parliament to expand presidential powers and weaken the legislature through the creation of a new executive council called the People’s Kurultai, to which parliament and the government would report.

Opponents to the proposals marched through Bishkek’s snowy streets, beating drums, carrying signs, and chanting “You Cannot Change The Constitution.”

The crowd was smaller than organizers had planned for.

The draft amendments are slated to be put to a vote during an early presidential election planned for January 10.

Since the amendments were made public, there has been a chorus of criticism from current and former Kyrgyz officials as well human rights defenders.

“Any constitutional reforms should be delayed until after a new parliament is sworn in, so that there’s no doubt about Kyrgyzstan’s commitment to human rights and the rule of law,” said Hugh Williamson of Human Rights Watch on November 21.

During last month’s postelection protests, which prompted authorities to cancel the results of the parliamentary elections, Japarov was released from prison where he was serving a sentence for kidnapping a political rival.

The upheaval created a power vacuum as the government collapsed and President Sooronbai Jeenbekov resigned.

As acting president, Japarov postponed fresh parliamentary elections from December 20 to an unspecified date in 2021, despite a requirement that such a vote come within two months.

That move cleared the way for an early presidential election on January 10.

Many of the legal changes were done under questionable procedural norms and by lawmakers whose current legitimacy is under question, experts said.

Under current legislation, anyone serving as president in an interim capacity may not then run in an election for the post. Japarov has said several times he planned to step down in December to be eligible to seek the presidency.

Other elements of the draft constitution could harm freedom of speech in the country, activists warned. One proposed measure would ban publications, media, or public events contrary to “generally recognized moral values and the traditions of the people of Kyrgyzstan.”

“Clearly, the values and traditions of people in Kyrgyzstan should be respected,” Ivar Dale, senior policy adviser at the Norwegian Helsinki Committee, said on November 19. “However, forbidding publications that would, quote, harm the morals and culture of the people of Kyrgyzstan involves opening a can of worms that could seriously violate that same people’s right to freedom of speech.”

With reporting by Kloop