President-elect Joe Biden has maintained silence for years on the controversial and continued use of so-called targeted killings — lethal strikes by drones, cruise missiles, and occasionally military special operations raids. Biden has never publicly disavowed or criticized former President Barack Obama’s legacy of expanding the use of drones, nor made clear his own policy on the continuation of targeted killing conducted by the Department of Defense and, clandestinely, the CIA.

His campaign and transition websites similarly make no mention of policy addressing drone strikes, a defining feature of Obama-era foreign policy. And no questions were asked during presidential primary and general election debates about assassination policies.

While on the campaign trail, Biden pledged to end “endless wars” without detailing how his administration would differ from those of President Donald Trump and Obama, even as lethal strikes, including against American citizens, have remained an often-noted blemish on Obama’s legacy.

“I think Biden and his team have yet to fundamentally reckon with whether or not counterterrorism even works.”

“There’s a pretty clear divide on our understanding of what it means to end endless war, and between what the Left actually wants to do and what they are likely to do,” Kate Kizer, policy director for Win Without War, told The Intercept by email. “I think Biden and his team have yet to fundamentally reckon with whether or not counterterrorism even works to actually address the security challenge and whether there are other tools that are more suited than military force to undermine the influence of violent groups.”

What we know of Biden’s opinion of lethal strikes is limited. In 2009, while serving as vice president, Biden pushed back against a strategy set forward by Gen. David Petraeus. Instead of sending 40,000 troops to Afghanistan along with civilian-assistance workers to rebuild the country, Biden advocated for what he called “counterterrorism plus,” a combination of special forces and aggressive drone bombing to target suspected Al Qaeda militants. Biden stuck by that advocacy on the campaign trail, vowing to keep a “counterterrorism” force in Afghanistan.

Obama sent about half as many troops as the generals wanted — but also embraced the plan Biden advocated for. The president heavily expanded the use of militarized drones as a central tenet of his counterterrorism strategy, assassinating classified targets on a secretive “kill list” within a 60-day window. The American public overwhelmingly supported drone strikes. By the end of the Obama administration, strikes had been carried out across an impressive expanse of regions: Hellfire missiles rained down over Pakistan, Iraq, Afghanistan, Yemen, Somalia, Libya, and Syria. While Obama officially recognized the targeting killing program conducted by the U.S. military in 2013, the classified CIA-run counterpart program has never been confirmed or denied by the agency.

“It’s disappointing, but not surprising, that Biden would not have made a lot of statements about drone strikes over the years, particularly because the Obama administration was so aggressive in using drones as a method of warfare,” Alka Pradhan, human rights counsel at the Guantánamo Bay Military Commissions, told The Intercept. During Obama’s second term, Pradhan represented victims of drone strikes while working as counterterrorism counsel with Reprieve. Americans have always been very comfortable with drone strikes, she said. “You don’t have to see who you’re killing. You don’t usually see their faces plastered across the newspapers because the government has a companion policy of not acknowledging civilian deaths for the most part.”

President-elect Joe Biden, center, waves with transition team member Avril Haines, left, as he arrives to speak with diplomatic, intelligence, and defense experts to discuss readiness at the relevant agencies during a meeting in Wilmington, Del., on Nov. 17, 2020.

As Biden prepares to assume office, his possible Cabinet selections have already begun to knock the credibility of any pledge to end the forever wars. Former Obama officials Michael Morell and Avril Haines have been reported as possible picks for director of national intelligence or CIA director.

Haines has already faced intense criticism from progressives. Tasked in June by the Biden administration to help execute his foreign policy pledges, Haines was directly involved with the Obama targeted killing program, even playing a legal role in shaping it — yet was considered a voice of constraint on lethal strikes in the latter half of Obama’s administration, the Daily Beast reported. Morell, a former deputy CIA director, embraced and defended the use of drone strikes, even calling reports of civilian deaths “highly exaggerated.” His defended targeting killings by claiming that they saved lives.

Last week, Biden was briefed on national security matters by a team that included Haines, as well as Gen. Stanley McChrystal and Adm. William McRaven, both former commanders of the secretive Joint Special Operations Command. McChrystal and McRaven were directly involved in the Obama-era chain of command that led to the approval and execution of lethal strikes.

McChrystal, whose own record is marked by allegations of coverups and commanding forces that killed civilians with impunity, has at times warned about blowback from civilian deaths by drone strike, though ending the practice of assassination strikes is not an option. “Drones are here to stay. We’re going to use them, we need to use them, and they’re an important part of what we do,” McChrystal told the Stanford Graduate School of Business in 2014. “We’re actually going use them even more.”

There have been indications that Biden intends to keep military counterterrorism strikes on the table. Earlier this year, during a Democratic presidential primary debate, Biden suggested that he wanted to replace, not revoke, the 2001 Authorization for the Use of Military Force, the legal justification used by successive presidential administrations for using military forces to carry out counterterrorism operations across the globe. For Kizer, the comment hinted that Biden does not understand what ending endless wars actually means. “Basically, what he’s saying is he wants renewed congressional authority to conduct drone operations, special forces raids, and relying on foreign ‘partner’ forces to fight these wars,” she said. “That’s not ending endless war; that’s a recipe for perpetual global war.”

Biden has been even more circumspect in addressing the CIA strikes. Early this year, the American Civil Liberties Union sent a questionnaire to candidates on a range of human rights issues. One question posed to the candidates asked if they would pledge to end lethal strikes conducted by the CIA. Biden never responded to the survey.

“It is disappointing not to get a response,” Hina Shamsi, director of the ACLU National Security Project, told The Intercept. “The use of lethal force, whether through drones or other weapons platforms outside of recognized armed conflict, is a defining characteristic of post-9/11 policy,” she said. “This approach has violated fundamental human rights, the rule of law, it has fueled conflicts, it has contributed to human displacement, and above all, in terms of consequences, has tremendously harmed hundreds of thousands of lives that are primarily civilian, Muslim, brown, and Black people.”

The issue of ending the alleged strikes conducted by the CIA is critical, said Pradhan. “It has to be ended and it is sad that that would even be a controversy,” she told The Intercept. “If you’re going to have this program, it has to be operated through DOD” — the Department of Defense.

What appear to be CIA drone strikes have been frequent, said Chris Woods, founder and director of Airwars, a watchdog that tracks various targeted killing operations.

“You can’t have transparency when a clandestine agency is conducting strikes,” said Woods, who spoke in a personal capacity. While Woods credits the Department of Defense for making improvements in recent years by systematizing civilian harm assessments and the admission of casualties, he said there was concern over a return to Obama-era secrecy: “A Biden national security team can’t come in as if it’s 2016. Time has moved on.”

“The really important thing that Joe Biden could do is end [the] CIA’s role in targeted killings, get them out of the drone strike business, and make it a U.S. military function,” Woods said.

For Shamsi, though, ending only the CIA’s ability to conduct lethal strikes doesn’t go nearly far enough. “The underlying problem is the program itself, and it would be a mistake to end the CIA’s role only to transfer it to another government agency,” she said. “It’s key to also remember that what we’re talking about is a program of lethal strikes against people who are suspected of wrongdoing, and that is the definition of extrajudicial killing.” 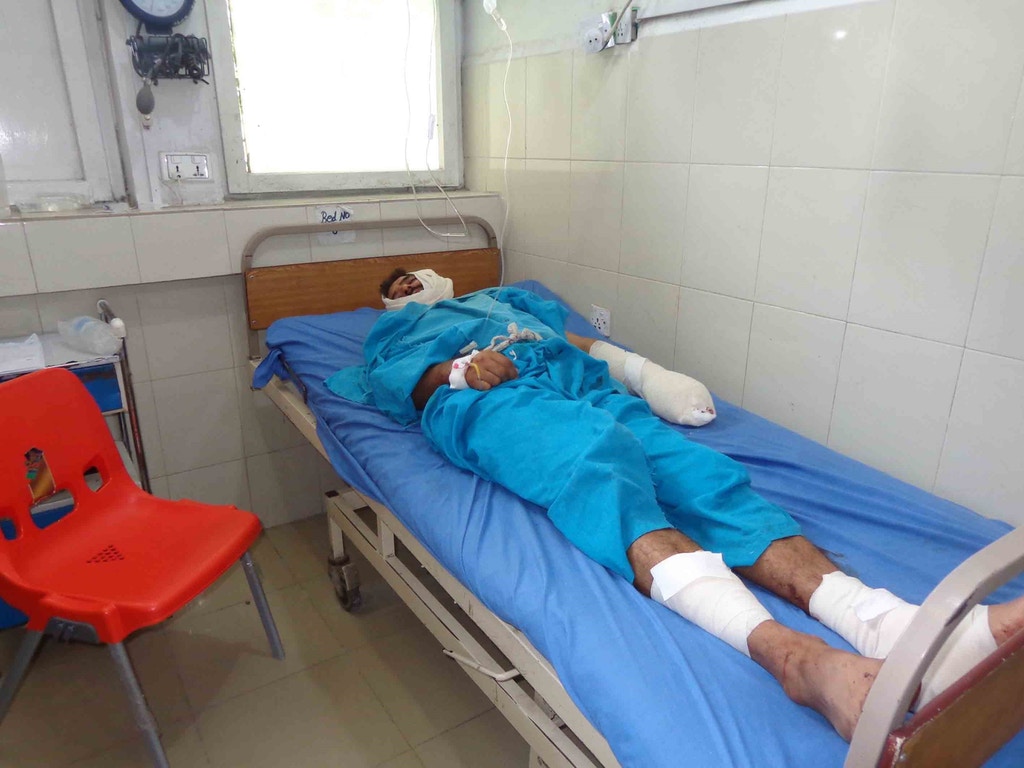 A wounded man lies on a stretcher at Jalalabad hospital after a suspected U.S. drone strike killing at least 16 people in Nangarhar, Afghanistan, on Sept. 28, 2016.

The Trump administration inherited Obama’s drone program and escalated lethal strikes in Somalia, Afghanistan, Iraq, and Syria, while aerial bombings continued across Yemen and Libya. Trump’s open embrace of airstrikes and special force missions led to shocking rates of civilian deaths in the early days of his reign. Now, in the sundown of the Trump presidency, civilian harm has become his legacy. That harm has created a stark motivation for raising questions about big-picture U.S. foreign policy over the past two decades.

“I think we need a pretty comprehensive review of all these policies relating to the global war on terror, particularly with regard to the CIA’s use of drone strikes,” said Matt Duss, a foreign policy adviser to Sen. Bernie Sanders, I-Vt. “We shouldn’t see the use of drones as separate from the broader use of military violence, because ultimately that’s the issue here: In what scenarios and under what authorities does the government of the United States, acting in the name of the American people, use violence to advance the security of the American people?”

“I think we need a pretty comprehensive review of all these policies relating to the global war on terror.”

The violence of the Trump era, coupled with Trump’s Janus-faced pledge to end the wars, did provoke bipartisan support for reasserting Congress’s role in approving acts of war, even as those efforts fell short. A historic attempt to end military support for the Saudi-led war in Yemen was vetoed by Trump. And another attempt by Congress this year to invoke the War Powers Resolution, seeking to block military action by Trump against Iran, was vetoed again. (Trump used a drone strike to assassinate Iran’s Gen. Qassim Suleimani while the military commander was in the neighboring state of Iraq. In the view of some in the legal community, the strike was a war crime that violated federal and international law.)

“I think there is a genuine bipartisan consensus to be built around this idea of Congress reasserting its Article I authority over war,” Duss said, referring to the constitutional provisions that give Congress sole power to declare war. “In following through on the commitment to end the forever war, that’s something that could be very useful for the Biden administration to focus on.”

Ending the wars is a broadly popular idea, but different actors see different ways of accomplishing the goal. Critics of the U.S.’s assassination programs, though, warn of approaches that would bring troops home while leaving the shadowy targeted killing programs in place. Pradhan said, “There is no credibility to ending a war if you continue these strikes without accountability.”