The MPs, whose names haven’t been publicised, have been in Prime Minister James Marape’s camp during the ongoing political standoff.

PNG’s Pandemic Response Controller David Manning said that an MP was initially tested at the weekend and returned a positive result.

According to Manning, the MP was isolated away from the rest of the government camp at Loloata Island, but that contact tracing unearthed more cases.

“As a result of further tests we did pick up another two positive cases, and of course they have now been isolated as well,” Manning told a media conference in Port Moresby.

“I have written in my capacity as controller to the Speaker of the national Parliament, advising him of the three positive cases, and as such I have recommended to him, consistent with our procedures as to what we expect in how to respond to this in so far as the Parliament is concerned.”

Health officials said any recall of parliament would need to follow safety guidelines. In the meantime any other MPs or parliamentary staff who have been in contact with the MP at the Loloata resort are to be isolated and tested.

All three cases are described by health officials as having “mild symptoms”. The new cases in the National Capital District take PNG’s total number of confirmed infections to date to 633. 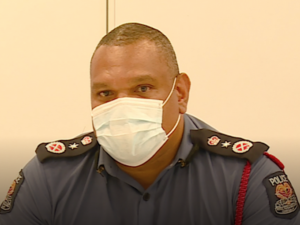 Local media is also reporting that another MP who had been at the Loloata camp had since also left for Vanimo in PNG’s northwest, where opposition MPs are camped.

Health officers in Vanimo have been directed to test the MP and close contacts.

Supreme Court seeks consensus on date for Parliament
Meanwhile, the PNG Supreme Court case on the legality of last week’s sitting of Parliament has been adjourned until today.

The application filed by former prime minister Peter O’Neill challenges the constitutionality of reconvening Parliament just over a week ago.

Speaker Job Pomat hastily called the sitting despite an earlier adjournment to next week allowed by his deputy.

The recall resulted in Parliament being adjourned to April.

This would enable Prime Minister James Marape to avoid a likely vote of no-confidence after dozens of MPs defected from his coalition this month.

According to the NBC, Chief Justice Sir Gibbs Salika urged parties in the proceedings to reach a consensus before the matter goes back for directional hearing tomorrow.

He suggests that if the opposition’s desired date for Parliament sitting on December 1 can be moved to another date, it can give time for the Supreme Court application to be heard.

This article is republished by the Pacific Media Centre under a partnership agreement with RNZ.