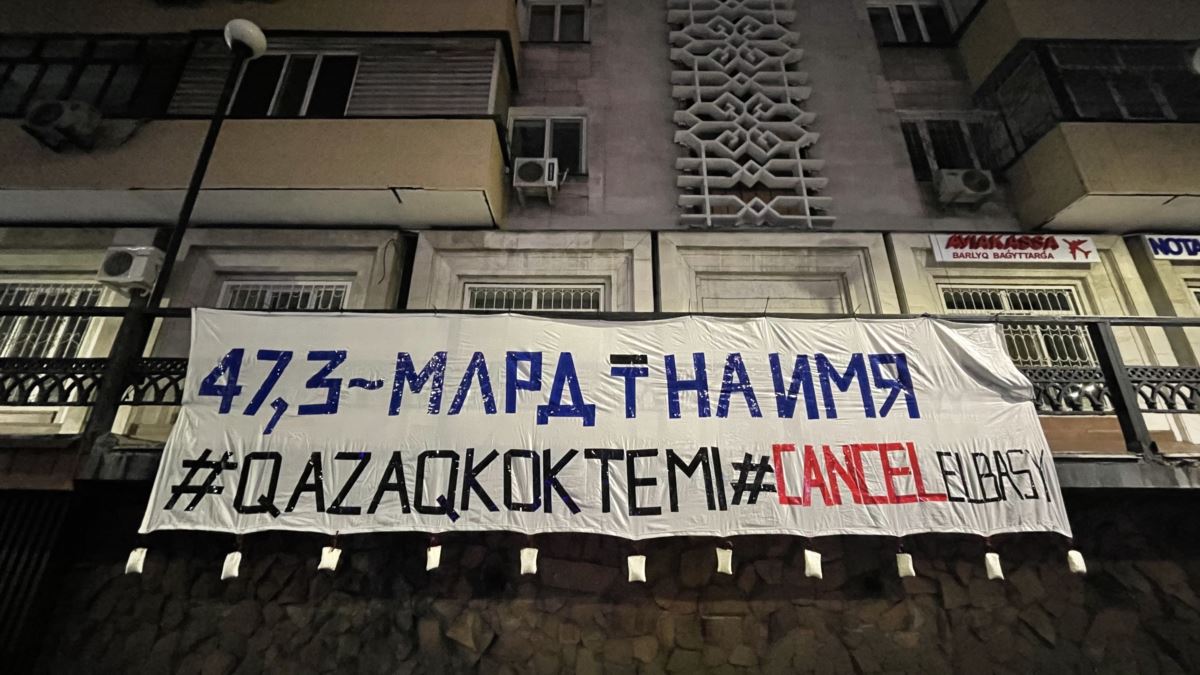 Nazarbaev, who ran the oil-rich former Soviet republic since before the collapse of the Soviet Union announced his decision to step down in March last year, but continues to control the nation’s internal and foreign policies as the lifetime chairman of the powerful Security Council and the leader of the ruling Nur-Otan party. He enjoys almost limitless powers as elbasy — leader of the nation.

December 1 has been commemorated as the Day of the First President since 2011.

The banner that appeared in downtown Almaty said “47.3 Billion Tenges For A Man’s Name” and carried hashtags #qazaqkoktemi (Kazakh spring) and #cancelelbasy.

A group called Rukh2k19 (Rukh means spirit in Kazakh) wrote on Instagram that its activists placed the 10-meter long banner in Almaty to protest the government’s move to rename the capital Nur-Sultan in honor of Nazarbaev after his official resignation last year. They also renamed all of the main thoroughfares in towns and cities across the nation after him. The capital previously was known as Astana.

“By various estimates, more than 47.3 billion tenges (almost $111 million) have been spent to try to immortalize Nazarbaev’s name. Today, when he and his entourage mark this holiday, those citizens who do not recognize him as a leader are thinking about ways to stop this cult-of-personality situation,” the group’s post says.

The group also noted that according to the Kazakh Constitution, “the only source of power in the country is its people,” and “every citizen of Kazakhstan must have a chance to take part in the nation’s affairs” as “freedom of choice and freedom of speech must be respected.”

“We also state that in our common home everyone is equal before the law and therefore the Law on the Nation’s Leader must be annulled,” the protest group said.

The decision to rename Astana to Nur-Sultan just one day after Nazarbaev announced his resignation last year sparked protests in the capital and other cities of the tightly controlled nation.

Critics and rights groups have accused Nazarbaev of showing no tolerance to dissent, and say he denied many citizens basic rights and prolonged his power in the energy-rich country of 18.7 million by manipulating the democratic process.