If money is the source of happiness, and having more money means more happiness, some of our multi-billionaire friends have reached unprecedented levels of happiness in recent years especially during the pandemic when their level of wealth has skyrocketed. These conditions are revealed in the latest figures on the distribution of wealth from the Federal Reserve Board that cover through the third quarter of 2020, and the daily figures put out by Bloomberg.

Below is a table based on the Federal Reserve Board Figures. The quarters selected represent the height of the wealth of the 1% during the Bush regime (2007Quarter 3) which was before the Great Recession, their wealth at the start of Obama’s presidency (2009Q1), at the end of his first term (2016Q4), at its high point, (2016Q3), and in his last quarter in 2016. For Trump, the numbers are for his first quarter in 2017, the high point which was just before the pandemic (2019Q4), the first quarter of 2020 that covers the onset of the pandemic, and the most recent figures that cover the third quarter of 2020. 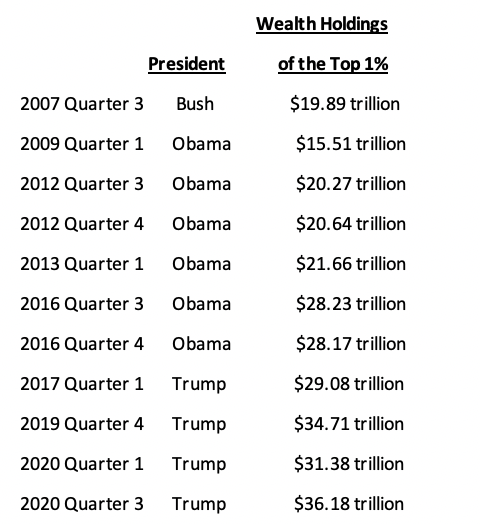 What the Fed figures show is just how well the top 1%, as a group, have been doing. The recovery of their nominal wealth from the negative impact of the great recession took about five years to exceed the high point achieved before the great recession. By contrast, under Trump, despite both the pandemic and economic decline, the recovery of the wealth of the 1% from its decline in the first quarter of 2020 back to its high point at the end of 2019, was not only reached in less than a year, but is even 4% greater.

As of December 23, the Dow Jones Index is up 8.4% from where it stood at the end of the third quarter, and the NASDAQ index is up 14.3% suggesting that the gains of the 1% for the year should come in at much higher than 4% given that these folks hold 52.7% of all of what the Fed labels corporate equities and mutual fund shares.

Benefitting the 1% the Most: Trump v Obama

During whose presidency did the 1% do better—Obama or Trump? The recovery of their losses was more rapid under Trump. However, despite the big tax break they gained under Trump, Obama appears to be the winner.

Their gain in nominal wealth from the start of Trump’s regime to the third quarter of 2020 comes to $7.1 trillion. During the similar period of Obama’s presidency, the gain in their wealth came to $4.76 trillion. While the dollar gain under Trump is greater, Obama is the winner in the percentage gain, 30.7% to 24.4%. However, Obama had an advantage in that the starting point was low due to the great recession.

A fairer approach could be to look at a similar period in Obama’s second term. From the first quarter of 2013 until the third quarter of 2016, the gain of the 1% came to $6.57 trillion. The quantity of wealth gain when, adjusting for inflation using 2%/year, is roughly the same dollar amount as the gain under Trump. However, the percentage gain in the 1%’s wealth in this period under Obama is 30.3%, almost 6% greater than the gain during a comparable amount of time of Trump being in office.[1]

Some Special Individuals During the Pandemic

As of Dec. 23, according to the Bloomberg Billionaires Index, in 2020, Warren Buffet is alone as a loser of wealth among the wealthiest 10 people in the world. Poor Warren is now worth $84.6 billion having to deal with losses for the year so far of $4.62 billion. Life can be tough.

There have been even bigger losers in 2020 among the super-rich. Amancio Ortega, described as a Spanish retailer, has experienced a loss of $9.41 billion. Right-winger Charles Koch, whose wealth places him at #20, has lost some $5.85 billion.

However, the losers are the exception. Most of those at the very top of the 1% have done much better than their average colleagues. Some have experienced gains in the tens of billions.

Leading the pack is Elon Musk whose wealth is up by triple digits, $127 billion, in just one freaking year. His gain alone would be good enough to make him the world’s third wealthiest individual after Bezos and Gates. His net worth is now $155 billion—and his gain has been even better than the world’s “favorite” retailer, Jeff Bezos, who has had to settle so far this year for an increase of $72.2 billion, almost $55 billion less than Musk. The danger for Bezos is if Musk continues on the path he has been on during the year, he will soon be number one, and could be the first to reach a trillion.

Here is the record in the Bloomberg report of the U.S. big 10 that shows that all of them, except Buffet, had percentage gains in wealth that are higher than the gain of a typical colleague in the 1%. 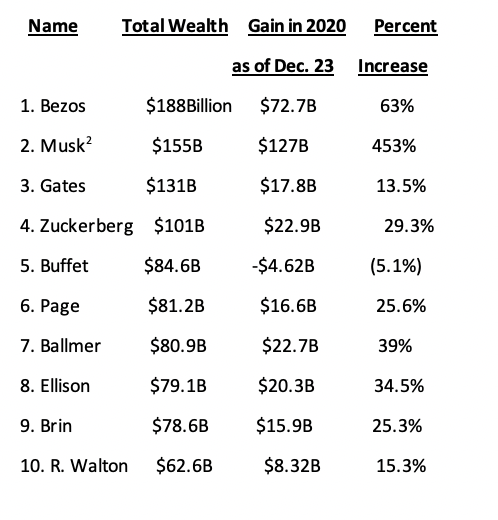 Were the figures here representative of a whole year, on a typical single day in 2020, Musk’s wealth increased by almost $348 million which comes to $14.5 million every hour, $241,628 every minute, or $4,027 every second. The increase in his wealth alone is enough to give all 331 million Americans $383 which is more than half of what the government will be offering in the latest stimulus bill.

How Many Billionaires does it take to reach One Trillion?

If you used your fingers and thumbs, you would be able to reach that magic number of $1 trillion without using any digit more than once. The holdings of the wealthiest 10 come in at $1.042 trillion. Their gains in 2020 as of December 23, come to $319.6 billion. Excluding the laggard Buffet, as a group, the increase in their wealth is $324.2 billion.

Those holding positions 11-20 have wealth of about half the amount of the top 10, $502.2B, with gains for the year so far of almost $54.9 billion, a figure that would be $70 billion when excluding their colleagues who lost wealth.

2020 Taxes on these Astronomical Gains?

Don’t expect taxes to be paid on most of the gains made by the wealthiest twenty. The hundreds of billions in gains mainly represent increases in the value of the assets they hold. Gains like that are generally not taxed unless the assets are sold—something that likely did not happen with much, if any. In other words, in contrast to income people earn from working at a job, and perhaps putting their health and lives at risk, little of the gain in wealth of the top 20 is likely to be going to the IRS.

America sure is great. Were the Robber Barons of the past alive today, they would probably be envious of the quantity of wealth held by the wealthiest and their recent additions and, perhaps, the happiness they have gained during one of the roughest and saddest years in our history.

1) During Clinton’s time in office, the wealth of the 1% went up 87.7%, from $6.13 trillion to $11.51 trillion. During W. Bush’s time, the wealth of the 1% climbed from $11.22 to $19.89 trillion for a gain of 77.2% before falling during the great recession to $15.91 trillion in his last quarter for a gain of 41.8% during his eight years. These figures, and including the Trump Obama comparisons, strongly suggests that in the last 28 years, the 1% have done better under Democratic presidents than under Republican presidencies. ↑