Towards the end of November, United Nations Secretary General António Guterres addressed the German Bundestag to celebrate the 75th anniversary of the United Nations (UN). At the heart of the UN is its Charter, the treaty that binds nations together in a global project, which has now been ratified by all 193 member nations of the UN. It is well worth reiterating the four main goals of the UN Charter, since most of these have slipped from public consciousness:

Guterres pointed out that the avenues to realise the aims of the Charter are being closed off not only by the neofascists, who he euphemistically calls ‘populist approaches’, but also by the worst kind of imperialism, as illustrated by the ‘vaccine nationalism’ driven by countries such as the United States of America. ‘It is clear’, Guterres said, ‘that the way to win the future is through an openness to the world’ and not by a ‘closing of minds’.

CoronaShock: A Virus and the World. Cover image by Vikas Thakur (India).

At Tricontinental: Institute for Social Research, we take the UN Charter as the foundation of our work. To advance its goals is an essential step for the construction of humanity, which is a concept of aspiration rather than a concept of fact; we are not yet human beings, but we strive to become human. Imagine if we lived in a world without war and with respect for international law, if we lived in a world that honoured fundamental human rights and tried to promote the widest social progress? This would a be a world where the productive resources would no longer be used for military hardware but would be used to end hunger, to end illiteracy, to end poverty, to end houselessness, to end – in other words – the structural features of indignity.

In 2019, the world’s nations spent nearly $2 trillion on weaponry, while the world’s richest people hid $36 trillion in illicit tax havens. It would take a fraction of this money to eradicate hunger, with estimates ranging from $7 billion to $265 billion per year. Comparable amounts of money are needed to finance comprehensive public education and universal primary health care. Productive resources have been highjacked by the wealthy, who then use their money power to ensure that Central Banks keep inflation down rather than pursue policies towards full employment. It’s a racket, if you look at it closely.

Two new World Bank studies show that, because of a lack of resources and imagination during this pandemic, an additional 72 million primary school aged children will slip into ‘learning poverty’, a term that refers to the inability to read and comprehend simple texts by the age of ten. A UNICEF study shows that in sub-Saharan Africa an additional 50 million people have moved into extreme poverty during the pandemic, most of whom are children; 280 million of sub-Saharan Africa’s 550 million children struggle with food insecurity, while learning has completely stopped for millions of children who are ‘unlikely to ever return to the classroom’.

The gap between the plight of the billions who struggle to survive and the extravagances of the very few is stark. The UBS report on wealth bears an awkward title: Riding the storm. Market turbulence accelerates diverging fortunes. The world’s 2,189 billionaires seemed to have ridden the storm of the pandemic to their great advantage, with their wealth at a record high of $10.2 trillion as of July 2020 (up from $8.0 trillion in April). The most vulgar number was that their wealth increased by a quarter (27.5%) from April to July during the Great Lockdown. This came when billions of people in the capitalist world were newly unemployed, struggling to survive on very modest relief from governments, their lives turned upside down.

Our most recent study, CoronaShock and Patriarchy, should be compulsory reading; it provides a sharp assessment of the social – and gendered – impact of CoronaShock. Our team was motivated by the acute state of deprivation in which billions of people find themselves and how that deprivation morphs basic social bonds towards the hyper-exploitation and oppression of specific parts of the population. The report closes with an eighteen-point list of demands that are a guide for our struggles ahead. We make the case that the capitalist states are controlled by elites who are unable to solve the basic problems of our time such as unemployment, hunger, patriarchal violence, and the under-appreciation, precarity, and invisibility of social reproduction work.

The texts that we published this year – from our red alerts on the coronavirus to the studies on CoronaShock – seek to orient us towards a rational assessment of these rapid developments, rooted in the world-view of our mass movements of workers, peasants, and the oppressed. We took seriously the view of the World Health Organisation to ground our studies in ‘solidarity, not stigma’. Based on the startlingly low numbers of infections and deaths in countries with a socialist government from Vietnam to Cuba, we studied why these governments were better able to handle the pandemic. We understood that this was because they took a scientific attitude towards the virus, they had a public sector to turn to for the production of necessary equipment and medicines, they were able to rely upon a practice of public action which brought organised groups of people together to provide relief to each other, and they took an internationalist – rather than a racist – approach to the virus which included sharing information, goods, and – in the case of China and Cuba – medical personnel. Because of this, we – alongside other organisations – have joined the campaign for the Nobel Prize for Peace to be given to the Cuban doctors.

We have assembled a remarkable archive of material on CoronaShock and on the world that it has begun to produce. This includes a provisional ten-point agenda for a post-COVID world, a paper first delivered at a High-Level Conference on the Post-Pandemic Economy, organised by the Bolivarian Alliance for the Peoples of Our America (ALBA). In the first few months of 2021, we will release a fuller document on the world after Corona. 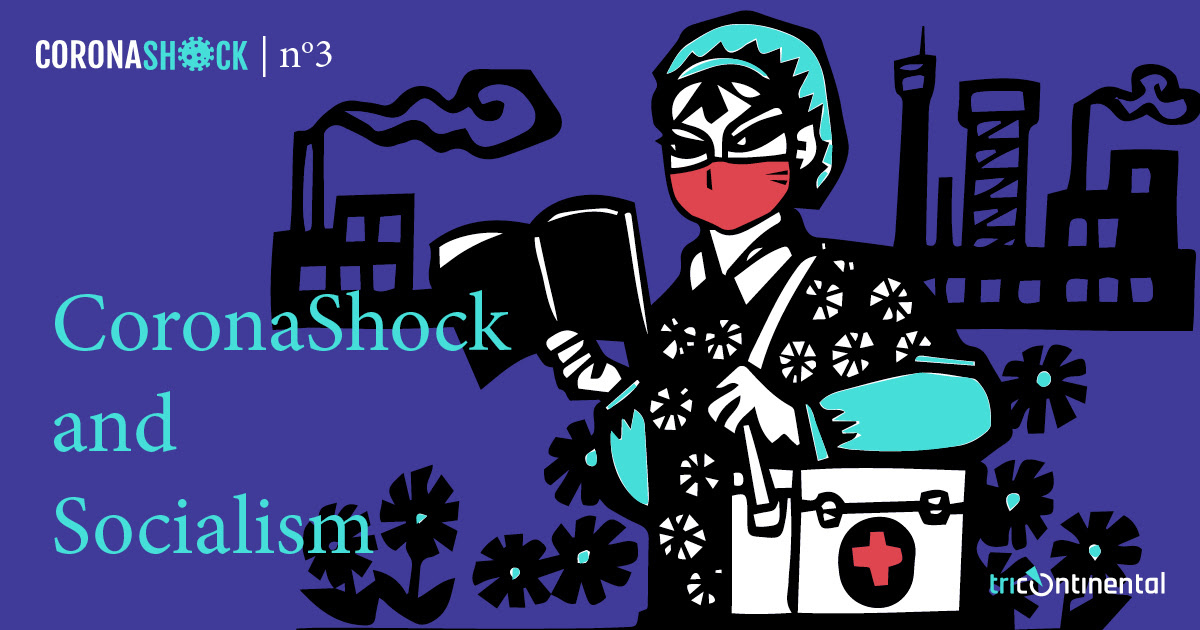 On a personal note, I would like to thank the entire team at Tricontinental: Institute for Social Research for their resilience during the pandemic, their ability to work at a pace much greater than before, and their good cheer towards each other during this period.

We swim in the waters of our movements, whose fortitude against the opportunistic and cynical use of the crisis by capitalist governments lifts us up and gives us courage. Last week, the newsletter highlighted the patient and dedicated work done by the young comrades of the Communist Party of India (Marxist) in Kerala, who work to build a humane and just society. The same kind of work can be seen amidst the Landless Workers’ Movement in Brazil (MST), and it can be seen in the Copper Belt region of Zambia, where the members of the Socialist Party campaign for next year’s presidential election, and in South Africa, where the National Union of Metal Workers (NUMSA) fights to defend workers against retrenchment during the pandemic and where Abahlali baseMjondolo builds confidence and power amongst shack dwellers. We see this great endurance and commitment from our comrades of the Workers’ Party of Tunisia and the Democratic Way of Morocco, who are leading a revitalisation of the Left in the Arabic-speaking regions, and in the great application of the peoples of Bolivia, Cuba, and Venezuela, China, Laos, Nepal, and Vietnam, as they seek to build socialism in poor countries who face a sustained attack against the socialist path. We take strength from our comrades in Argentina, who struggle to consolidate the power of the excluded workers and to build a society beyond patriarchy. We are a movement-driven research institute; we rely upon our movements for everything that we do.

This article was posted on Thursday, December 31st, 2020 at 7:49am and is filed under COVID-19, Housing/Homelessness, Human Rights, Poverty, Resistance, Socialism, Solidarity, United Nations.