Stuck at home last spring, newly furloughed or just newly bored, tens of thousands of Americans joined anti-lockdown groups on Facebook. Largely comfortable, mainly white people living in states from Oregon to Florida, the anti-lockdown converts initially railed against masks and restaurant closures, trading videos from demonstrations they attended at state capitols. After Minneapolis police officers killed George Floyd in May, the anti-lockdown activists’ rhetoric took on toxic levels of racism and suspicion, their paranoia about vaccines mixing with paranoia about antifa. After the November election, they pivoted to hyping an insurrection.

Anti-lockdown and anti-mask groups, which now count some 3 million members on Facebook, were a crucial recruiting ground for the Stop the Steal effort that culminated in the deadly siege of the U.S. Capitol on January 6. “The ranks of Stop the Steal groups were able to swell to hundreds of thousands almost overnight largely because they drew on this established base that had already been radicalized,” said Devin Burghart, executive director of the Institute for Research and Education on Human Rights, which documents far-right organizing and white nationalism.

Behind the Proud Boys, boogaloo proponents, and QAnon adherents who stormed the Capitol on January 6 were legions of others who started with a less ambitious gateway cause: that no politician should stand in the way of their right to order a steak on Saturday night.

As the election fraud movement gained steam in the week following the election, Burghart and his colleagues counted 35,994 members of anti-lockdown groups who joined Stop the Steal-related groups. That number is likely a severe undercount. The researchers were only able to catalog a portion of anti-lockdown supporters’ profiles, and even as they worked, Facebook was taking down Stop the Steal pages. But it became clear to Burghart that Covid-19 denialist groups were critical to the Capitol assault. Recruits from such groups far exceeded those who had previously joined Facebook militia groups or tea party groups. “We’re pretty confident that was just the tip of the iceberg, given the high presence of Stop the Steal rhetoric in anti-lockdown groups,” Burghart said.

As Facebook expelled more blatantly undemocratic groups, the reopen groups took over their message. Last week, members showed off photos and videos from the rallies in Washington, D.C., that preceded the Capitol siege as well as from the demonstrations that rocked state capitols around the country.

Among the anti-lockdown activists who showed up in Washington, D.C., on January 6 was Army Capt. Emily Rainey, a psychological operations officer. “Get off the bench,” she said in a video that she posted to her Facebook page two days later, after Capitol sanitation workers had cleaned blood and feces off marble floors and statues. “This is not an extracurricular activity. This is an existential activity. You need to start fighting.”

A member of ReopenNC, a private group advocating reopening in North Carolina, Rainey has a history of coronavirus-related stunts. She clashed with police last spring after repeatedly tearing down the tape surrounding a playground that had been closed off because of stay-at-home orders. The Army is now investigating her for leading a group of people to the Washington, D.C., rally on January 6. Rainey told the Associated Press that she did not enter the Capitol during the riot.

In response to a request for comment, Facebook spokesperson Kristen Morea emailed a statement that reads: “We removed content and accounts that violated our policies against inciting violence and dangerous organizations in the lead up to January 6. We have put emergency measures into place and will continue to monitor activity on our platform in real time and remove anything that breaks our rules.”

But at least 150 anti-lockdown groups reviewed by The Intercept remain active, and the chatter in some is openly violent. In Reopen Minnesota, a private group with 38,000 members, people are calling for the state’s governor and attorney general to be burned at the stake. In Open Oregon, they are pledging to assault Gov. Kate Brown — to “squeeze her face shut” — and bring on bloodshed. “Governor Brown we are coming for YOU!” one person wrote on January 9. “God is in control. Trump isn’t done. The best is yet to come,” wrote another.

In ReopenNC, Rainey’s group, an administrator went live on January 8 to urge her 87,000 followers to rise up. Her voice shook as she explained that she was preparing to migrate the group to another platform: “Stay the course. Hold the line. Don’t give up. This is not over yet.” She also said, apparently alluding to the violence at the Capitol: “A lot of important things happened in D.C. Some precedents were set.”

Protesters carry rifles near the steps of the state Capitol in Lansing, Mich., on April 15, 2020.

The route from rejecting masks to rejecting the republic was more direct than it might seem. Although some spring anti-lockdown demonstrations consisted mainly of people in SUVs honking their horns, other events were more threatening. On April 30 — days after President Donald Trump tweeted “LIBERATE MICHIGAN!” — demonstrators armed with rifles entered the Michigan Capitol. In May they showed up again, this time with signs that compared Gov. Gretchen Whitmer to Hitler and others that read “Tyrants Get the Rope.” Whitmer would later became the subject of an elaborate kidnapping plot.

The early anti-lockdown protests were promoted and partially bankrolled by groups linked to the tea party. Other efforts were spearheaded by gun rights advocates and far-right rabble-rousers the Dorr brothers.

In May, authorities arrested a Colorado reopen protester after investigators found four pipe bombs in his home. In June, federal prosecutors in Nevada charged three anti-lockdown activists for conspiring to blow up or set fire to U.S. government buildings. Armed men affiliated with the Oath Keepers, a right-wing militia group, and other far-right groups also provided protection to hair salons that defied business closure orders.

Along the way, the tone of the Facebook groups shifted. Initially, some members clung to the notion that their cause was bipartisan. “Hey guys FYI this group isn’t just Trump supporters there are some democrats and independents here too,” someone posted in Reopen Minnesota on April 17. As they prepared to rally at the governor’s mansion, another asked people to “leave all your Trump gear at home,” writing: “This whole thing about getting our rights back is not about Trump.”

But by summer, the Minnesota group was flooded with photos from Trump boat parades and rallies. By November, members spoke of Trump as the sole figure standing between the United States and communism.

Although far-right, white supremacist, and militia groups have long flourished in the United States, pandemic-related rage may have further grown their ranks, with social isolation making people more prone to radicalization. “You’ve got a need for community, and the need for community becomes about rejecting the lockdown, and that becomes the first principle of forming the community,” said Alexander Reid Ross, a researcher at the Center for Analysis of the Radical Right and author of “Against the Fascist Creep.” “That is a recipe for disaster.”

People who may have started out concerned about local businesses stayed at home glued to screens, where they were exposed to ever more extreme content. “They stepped onto this conveyor belt and then were rapidly drawn into this world which filled them with more and more conspiracy theories and more and more reasons to go out and commit acts of violence,” said Burghart. “That radicalization path is far more rapid today than it ever has been in the past. It used to take years to radicalize someone. It now takes months.” 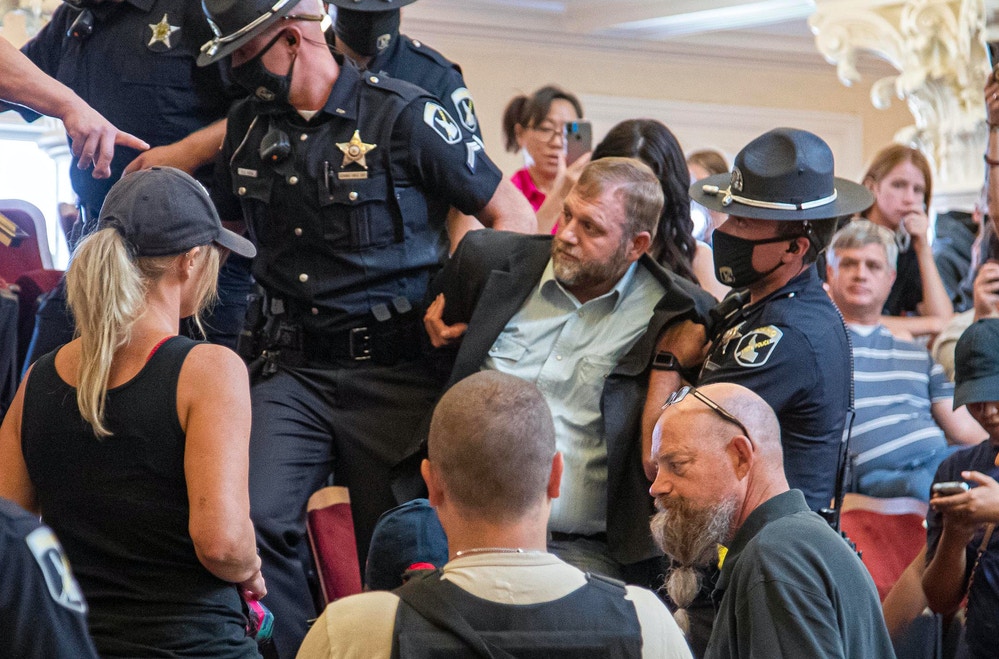 Ammon Bundy was arrested twice in two days at the state Capitol in Boise, Idaho, in August 2020.

Among those easing the transition was far-right leader Ammon Bundy, infamous for his 2016 takeover of the Malheur National Wildlife Refuge in Oregon and his family’s earlier standoff with the federal government in the Mojave Desert. In April 2020, he launched the group People’s Rights, whose purpose was to defy Covid-19-related health directives. He soon expanded to include anti-vaccine proponents, growing the network in part on Facebook. In August, Bundy and his maskless followers stormed the Idaho Capitol, foreshadowing the events of January 6. “The government has no right to tell a person what they can put over their mouth,” Bundy later told the New Yorker. On January 6, People’s Rights adherents fanned out to state capitols and to Washington, D.C., posting videos of the events on Facebook afterward. People’s Rights now has informal chapters in at least 16 states.

Though the group has been banned from Facebook, many of its leaders remain active on the platform. Ruby Lefeau, a prominent People’s Rights organizer in Washington state, posted a video from a car in Washington, D.C., after the January 6 rally in which she said: “We left the Capitol because they’re starting to lock it up. We’re going to go drive around. Looks like we’re looking for the White House.” She added, apparently to the other passengers in the vehicle, “I’d be careful we don’t get arrested.” The banner photo on Lefeau’s Facebook is a digital flyer that was widely circulated by the far right ahead of January 6. “Operation Occupy the Capitol,” it reads.

“That whole incident is white supremacists fighting for their lives so that they can keep their militarized police force suppressing and killing Black people. That is why they rose up. That is why they stormed the Capitol.”

Anti-lockdown leaders have told their followers that the next few weeks will be critical. “It’s at times like this when everybody has to decide what kind of man they are, what kind of woman they are,” Ben Dorr, one of the Dorr brothers, said in a video posted to Reopen Minnesota on January 8. “It forces people out of this comfort zone, and you’re either a little weasel, a little squirrel, or you’re a titan. You’re a patriot. You’re a fighter.”

Researchers and activists say that while Facebook bears significant responsibility for the radicalization of anti-lockdown groups, law enforcement is also to blame for not taking those early protests seriously. The June 2020 BlueLeaks hack, which exposed data from law enforcement agencies and fusion centers around the country, turned up relatively little on the spring reopen protests even though many demonstrators were armed. The George Floyd protests, by contrast, came in for intense scrutiny in the trove of documents, with fusion centers including in their alerts anti-racist barbecues and candlelight vigils. Documents that were subsequently leaked to The Intercept showed that police also surveilled cultural events held by the Black community over the summer.

To Jamie Garcia, an organizer with the abolitionist group Stop LAPD Spying Coalition, the events of January 6 are inextricable from abuses in policing. “That whole incident is white supremacists fighting for their lives so that they can keep their militarized police force suppressing and killing Black people. That is why they rose up. That is why they stormed the Capitol.”

Meanwhile, a volatile far-right movement is not the only outgrowth of anti-lockdown demonstrations. The Covid-19 denialism that radicalized some insurrectionists has also contributed to a spike in cases across the United States. “The military is at my hospital,” said Garcia, who is a nurse in Los Angeles. “That’s how bad it is. People are dying. There is nowhere to go if you get sick.”