It took another Barbarian to deliver the toughest talk to the Vandals and Goths who sacked the American Capitol last week. Whether any from these bearded, fur-clad tribes were listening to Conan the Californian seems unlikely since his campfireside chat was issued on YouTube, a forum from which the Germanic marauders’ orange-haired chieftain had been banished. Trump’s warriors fled the Capitoline Hill and across the frontiers of Empire to brood and plot in the darkest caves of the internet.

Schwarzenegger remained at his post—an executive desk bigger than DC itself with a mighty sword tilted across its pigskin top. Behind him the American and Californian standards—the very colors of Empire—brightened the somber tones of his lair and its hoard of trinkets and trophies accumulated from hard-bitten campaigns in motion pictures and politics. In his break-out feature film of 1982 Conan the Barbarian—scripted by Oliver Stone and therefore rich in political allegory—the eponymous hero gnaws thoughtfully on a haunch of hare then turns to his sidekick and asks him what gods he prays to. When asked the same question in turn, Conan responds that his deity is Crom, God of the Earth. Our hero’s religious affiliations have evolved in the intervening four decades. Peering out from behind the flags is a painted image of a big-backed muscle man flexing in profile: Conan now prays to himself.

The staging of Schwarzenegger’s YouTube speech made me think of another crowded tableau from a different era of riots, wars, and unrest: Thelonius Monk’s Underground of 1968. The High Priest of Bop sits at an upright piano. Instead of a sword, he has a machine gun slung over his shoulder. A Nazi soldier is tied up in the background next to a Swastika flag as General de Gaulle looks down from the wall. Amidst grenades, dynamite and other military gadgets, we see wine, cheese, grapes, and bread. This Resistance doesn’t lack for simple but excellent fare. 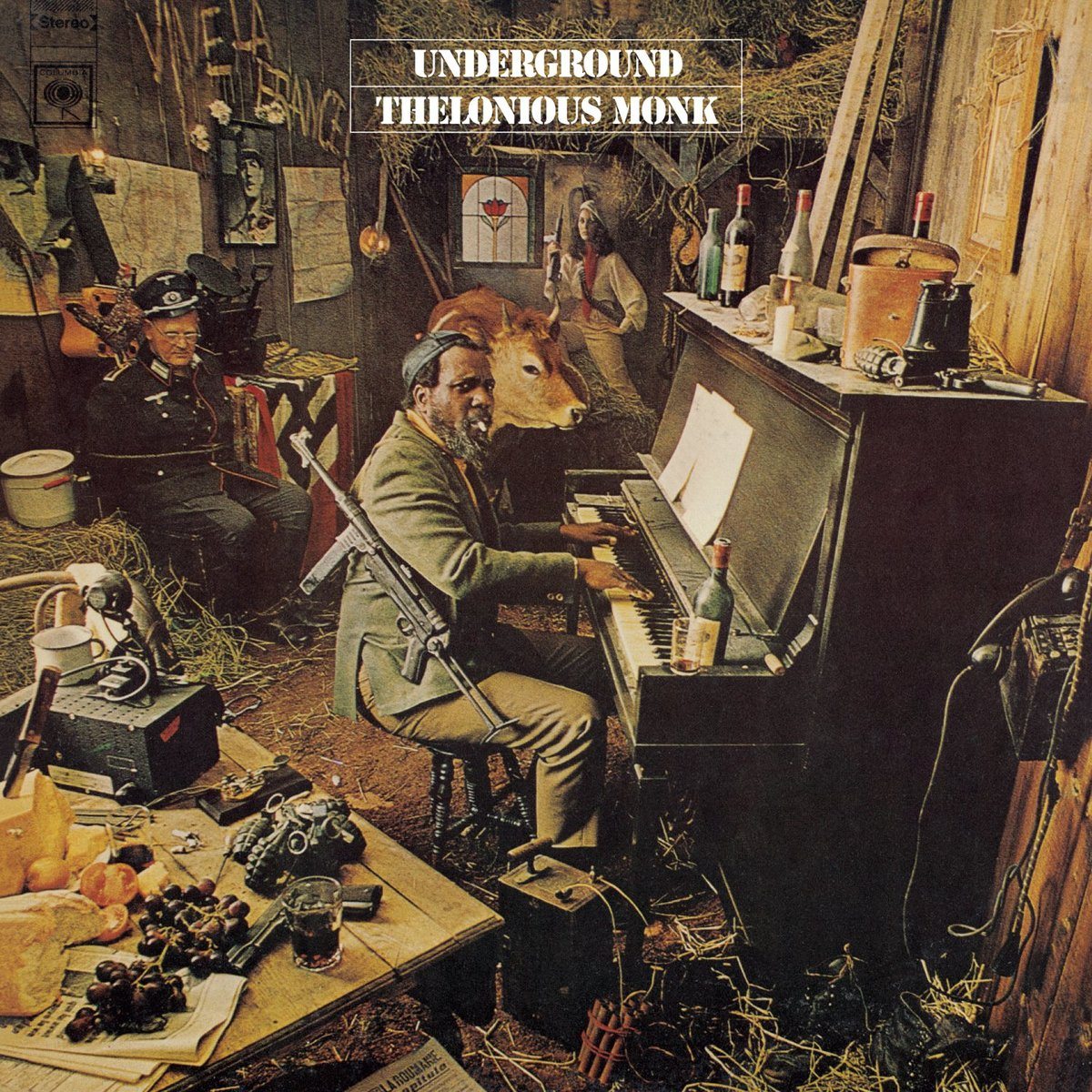 In contrast to the Underground cover, Schwarzenegger’s musical weapons are not pictured within the YouTube frame. But they are there to be heard—fearsome, clever, unwavering.

In this space your faithful Musical Patriot has over the years reflected upon music’s political potential: at rallies and conventions, inaugurations and state ceremonies; in advertisements and movies; and in playlists algorithmically—and algorhythmically—pandering to crucial voter demographics.

But underscoring in real time would greatly enrich political spectacle. How much more entertaining, indeed compelling, would the repetitive and predictable impeachment speechifying in the House of Representatives have been if, as each speaker strode to the lectern, she waved her iPhone so that carefully curated backing tunes emanated from hidden speakers in the chamber to pep up and profile her words?

Back in Ancient Rome, several centuries before the barbarians were coursing through its gates, Cicero remarked on the musical modulations mastered by the best public speakers. In his De Oratore (On the Orator) written a decade before Julius Caesar was assassinated, Cicero describes how a certain Roman Senator, C. Sempronius Gracchus, owned a musical slave who was charged with playing a few notes on a small ivory pipe when it was necessary to bring the flagging speaker back to the proper tone and tempo.

Rather than a single flutist, Schwarzenegger has enlisted a legion of full synth/string orchestra, like Gracchus’s slave, hidden from view.

The continuous music for Schwarzenegger’s seven-minute speech is made up of three identical two-minute loops with a slightly different coda tacked on at the close.

Like Shakespeare’s Mark Antony, Schwarzenegger addresses himself to his countrymen, moving quickly to comparisons between the Kristallnacht of 1938 of his native Austria and last week’s broken glass in the American Capitol.

As Schwarzenegger scowls into the camera the music pulses with determination, ominous in the minor. The pace and aura conjure a distant horseman cantering towards battle: the repetition of a single chord makes clear that destiny demands resolve. This is not the stuff of the original Conan movie, whose impressive score by Basil Poledouris is a sprawling tapestry of Orffian menace, Wagnerian triumphalism, and Hollywood medievalisms. Rather, the soundtrack of Schwarzenegger’s YouTube speech sounds much more like video game music, indeed not unlike that of Age of Conan: Hyborian Adventure.

As Schwarzenegger turns to his touching tale of a troubled post-war boyhood, beaten by his damaged, belligerent father haunted by the war, the bass strives upwards, grappling with fate. The Good glimmers beyond the darkness of Death. A melody begins to suggest itself. It, too, clings to a single note, but yearns for movement—for something better, perhaps even the truth. The figure descends to form dissonances—the musical markers of tension, but also of resolution. Determination is required to overcome these difficulties. Then the melody begins to rise as Austrian democracy is lost to the Nazis. A muted timpani roll presages doom or triumph. As Schwarzenegger invokes the horror of collaboration with evil, what might be synthesized voices begin to emerge from the musical texture. There is a surge of strings as he intones, “It all started with lies, and lies, and lies …”

Finally, at minute five the blade is raised from the desktop by Schwarzenegger’s big hands and is angled upward towards the ceiling. We are told that the weapon is the “Conan sword.” As in the movie, we learn the truth of steel—that it is stronger than flesh. So is Democracy: heated, and hammered and plunged repeatedly into the cold water of danger, but then raised again in victory: “The more you temper a sword the stronger it becomes.” The synth strings push on, as Schwarzenegger steams and froths in the heat of the forge. He concludes: “Our democracy is like the steel of this sword. The more it is tempered the stronger it becomes.” In Schwarzenegger’s pronunciation “tempered” sounds more like “tampered” — no doubt a confirmation for millions that when he says Democracy he means the Deep State.

The Conan blade brings to mind the huge painting from 1847 in the Capitol Rotunda, “The Landing of Columbus,” that last week’s intruders blithely strolled by, iPhones in hand. In the picture Columbus points the tip of a similar sword at the land of the New World, claiming it for Spain. The symbols of Christianity fly behind him. The naked natives run for cover. The painting says everything about the Sacred Temple of Democracy which it adorns. 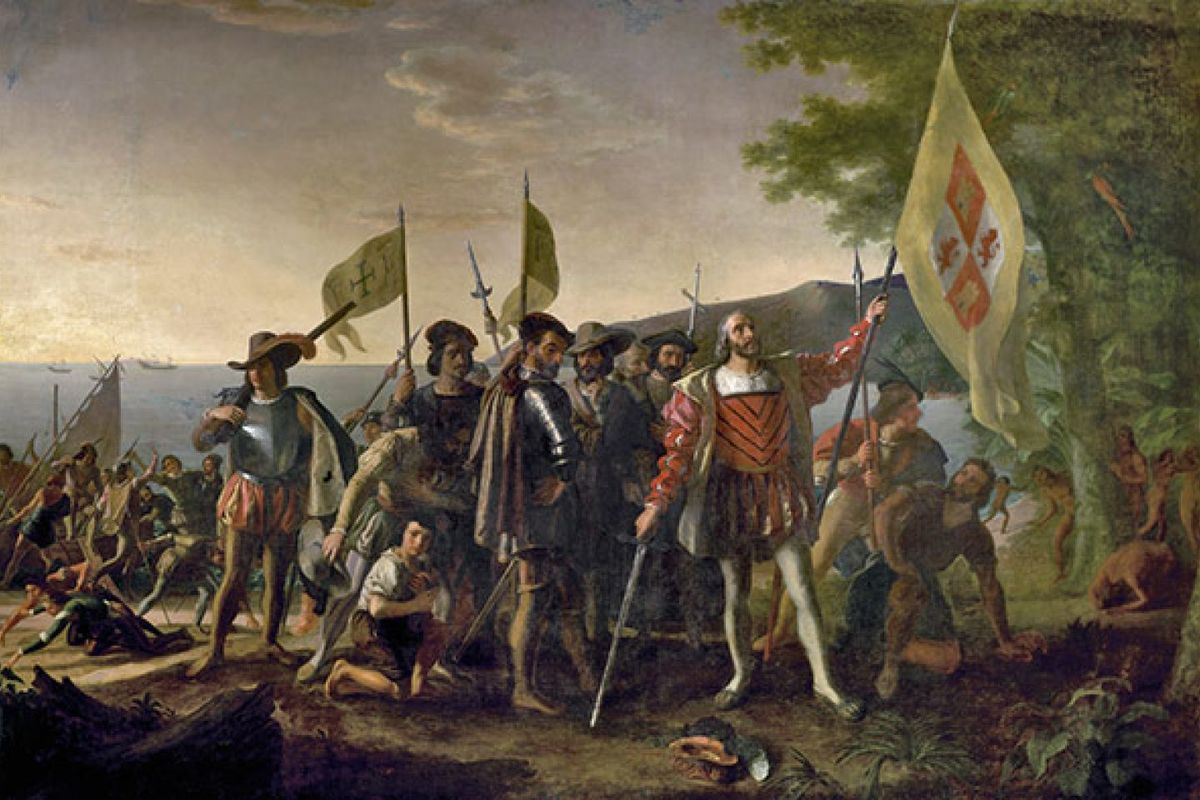 As the music returns a fourth time to its opening, Schwarzenegger makes an impassioned call for unity and healing, and sternly tells the Proud Boys and other “opponents of the Constitution” that “you will never win.” He urges all Americans to join him in wishing Biden great success and finally Schwarzenegger calls on God to bless all of us and America, as cymbals shimmer and the soundtrack surges.

There is much to be buoyed by in what Schwarzenegger says and how he says it. For one thing, he has become a much better actor since James Earl Jones and Max von Sydow blew him off the screen in Conan. But the suspicion that the barbarians will soon be back at the gates of Empire is hardly allayed by the lessons to be learned from a Bronze Age B-movie prop, try as those synth-strings might to convince us to believe otherwise.

The post Conan and the Vandals appeared first on CounterPunch.org.