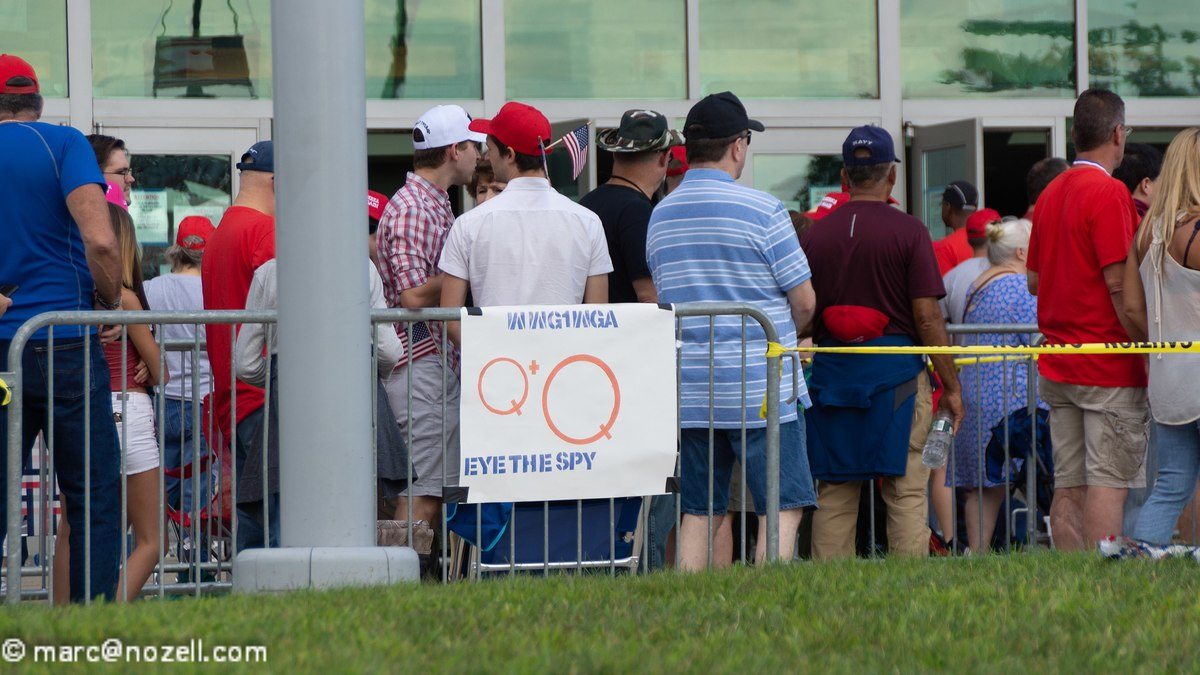 The role of QAnon in the January 6 MAGAist insurrection is becoming clearer by the day. Most readers are familiar by now with its unofficial mascot, be-horned “supersoldier” (and perhaps future WWE Trump tag-team member) Q Shaman. In addition, at least two of the five dead were QAnon adherents. Even the killed police officer followed QAnon influencers on Parler.

Meantime, their enigmatic prophet/insider Q hasn’t posted in over a month, and only the fourth dropping since Election Day (compare that to the average of over 130 per month over the three-year run). How do we reconcile this silence with its mob prominence? I would venture to say that QAnon goes on because it has disappeared into and become the crowd. QAnon’s mission is over and it has been a successful one at that. But what comes in its wake could be much worse.

To put it simply, QAnon provided Trump loyalists with a transcendent narrative, moral certitude, hostile enemy, and unit cohesion. QAnon sought to mobilize a mass to “change the narrative” in accordance with a putative military operation. Its redpilling phase (The Great Awakening) is now over, as it successfully won over a sufficient number of hearts and minds. The Storm is here now, and that phase of the mission is different, as we’ll see below.

The seeds were planted months ago. As a way of avoiding de-platforming and banning by Big Tech (obviously it didn’t work), QAnons camouflaged themselves through codes such as “17” (the letter Q’s place in the English alphabet), or referring to Q as “our favorite anon,” “special insider,” and “military insider.” More recently, one of their major agitator-influencers contended that there is no QAnon, only Q and anons.

QAnon as a named community or specific entity might be dead. This doesn’t mean the effects of this three-year old militant Magaist spiritual movement are gone. The collection of agitators and agitated has mutated, dispersed, and retrenched into something more dangerous: a networked social body on a death march to civil war. Jan 6 was its opening salvo.

Here are its key accomplishments, coming into relief in the last six months:

*It has expertly constructed an enemy through seemingly grassroots means. QAnon recruited and integrated its zealots through classic wartime propaganda techniques, stirring the passions to invent an all-powerful yet ultimately vanquishable enemy. Hardcore adherents will never see Biden as a legitimate president because he heads the party of bloodthirsty child predators. Built on top of this frothing moralism, other familiar enemies merge together: Communists, Satanists, and Foreign Influencers (Soros, Globalists, with special guests the Chinese government).

*It has generated a network of authoritative interpreters and “decoders” who have established their credibility among a large following and continue to develop a media ecosystem despite ongoing efforts at deplatforming them. The restorationist rightwing mirrors the Russiagate-era integration of intelligence and security officials into MSNBC and CNN. QAnon adds reactionary insurrectionist layers to the existing “weaponized flak” (what Brian Goss, extending Chomsky and Herman’s propaganda analysis, calls the 21st century advances in antagonizing media outlets to shape political opinion). But instead of supplying professional news outlets with pundits as force multipliers, the QAnon version uses ex-military intelligence and others to build their own martial media. No longer a pressure operation on mainstream media, flak severs ties with them, developing autonomous media networks and agitator-influencers as part of a combat operation (see the peculiar sudden appearance of sites like WorldView Weekend and American Periscope Media).

*More than anything, QAnon has been fomenting war in various spheres. From its inception, QAnon has rested on the prophecy of an imminent military coup against the deep state. This coalesced around the Presidential election. In July 2020 we saw QAnon circulate a Digital Soldiers oath in which members swore fealty to Trump and the Constitution. This campaign converged with the Army for Trump, part of his presidential bid that involved watching over (translation: meddling with) the voting process. These martial simulations eventually converged with organized militias and boogaloo militants (whose Hawaiian shirts also seem to have dissolved to black) to produce a civilian war machine that eagerly awaits its orders from Trump (and factions of the standing army).

For the two-month period of Nov 3-Jan 6, the influencer-agitators were keeping up morale, encouraging their followers to “hold the line” in the face of numerous defeats of the Trumpist legal campaigns. Predictions of (translation: calls for) civil war by Lin Wood, Michael Flynn, and former Generals led the charge.

During its three-year run, QAnon helped accelerate this predicted civil war by proliferating social severances. Fanatics turned against neighbors, lovers, and bio-family members as they were suspected of being deep state agents, or child traffickers, or both.

But the biggest severance is from the empirical realm. Their feverish fantasies have hostilely removed the faithful from a shared world, producing an augmented reality with diminished capacities. QAnon is an exemplary case of propaganda’s projections and reversals. They project their actions (e.g. coup, treason, fascism) onto their enemies. Even their own Capitol storming has now been officially deemed an Antifa operation.

In a remarkable 180 degree turn from the FEMA concentration camp panics of 1990s New World Order conspiracy narratives, current “freedom” fighters salivate over the possibility of martial law and putting citizens in Guantanamo. The liberty-lovers love imagining others deprived of it—imprisoned, tortured, and killed. The bottom-line value is the freedom to exert despotic power, a sovereign delight afforded to their leader as well as to the millions of mini-tyrants. If such microfascist cruelty can be directed against women and people of color, all the better.

QAnon also prepared the way for a final troubling dimension to their messianically invoked war: sacrifice of life. Kyle Rittenhouse defense lawyer, QAnon darling, and 1776 fetishist Lin Wood regularly foresees death in his calls to action. In early December at a Georgia rally, Wood shrieked “we will die before we let them steal our freedom!” from the stage. Around the same time, Stop the Steal campaign organizer Ali Alexander tweeted, “I am willing to give my life for this fight.” Arizona’s Republican Party retweeted Alexander’s message with a challenge: “He is. Are you?” At the Jan 6 Save America rally in DC, Rep. Mo Brooks invoked the blood sacrifice of American ancestors and then asked if the crowd was willing to do the same.

QAnon has stirred up the necrotic passions in such a way that a significant sector of the population is ready for martyrdom. One can imagine the future instagram inspo posts now: “Dying my best death!” They already have some martyrs as a result of Jan 6. How many more are to come? More to the point, how will their slogan “where we go one we go all” include those taken against their will?

QAnon, now publicly moribund because it resides secretly in the hearts and hashtag-engorged profiles of its enthusiasts, has completed its mission’s first phase. It has developed a national social network gearing up for a holy war, ready to become fodder for its operators. Someday historians will puzzle over this elusive alphabet letter much like we do over the Nike shoes on Heaven’s Gate corpses. But the stakes this time are much higher.

Jack Z. Bratich is associate professor in the journalism and media studies department at Rutgers University. His most recent publication is Civil Society Must Be Defended: Misinformation, Moral Panics, and Wars of Restoration. He is currently working on a book on necropolitics and culture called “Deathstyle Fascism.” He can be reached at jbratich@rutgers.edu