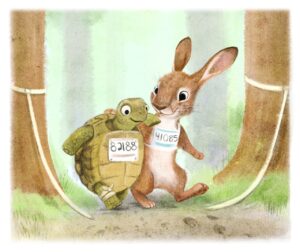 A couple of years ago I experienced one of those quick flashes of insight that seem to come to us few and far between. I was cooking – I don’t remember what was on the menu, but I was probably recovering from the stressors of the work day and had turned for solace to the kitchen, that warm sensory capsule, with its many tactile and menial tasks and practical problems to solve. Cooking, I have found, slows me down in a way that just feels right. For years I have been aware of this and sought it out as a palliative, an anti-dote to the quicker-than-me rhythms of not only the rushing stream of professional demands that crowd my time and psyche, but also the rapid-fire news cycle and its open firehose of unsettling events and looming dangers.

As I chopped, and cleaned, and primed the oven that evening, an idea flashed on inside my head like a bulb with a new source of energy. It wasn’t a complicated idea: it simply occurred to me that the positive emotional connection that relationships are built on, the solidarity and mutuality that are the felt core of our social bonds, is slow to develop. In contrast, the negative emotional cathexis that preempts and destroys relationships can happen quickly. Considered as an occurrence, love is a slow motion affair. Hatred can be quick (as can be its kindred attitudes contempt and dismissal.) The difference is like that between a nine-inning baseball game and a boxing match that ends in the first round with a hard blow to the head. The difference between a friend and an enemy, between fellowship and discord, in other words, is a matter of time. The time required to close the gap between us, or to widen it to a chasm. The speed of love vs. the speed of separation.

As epiphanies go, this one was not earth-shaking. Nonetheless, I chewed on this idea for months. Is it always the case, I wondered, that love is slow while hate is fast? The apparent exceptions to the relative velocities of solidarity versus separation either didn’t hold up, or were the exceptions that underscored the rule. Love at first sight is more of a romantic myth, I decided, than the kind of radical centering of other people that develops at the heart of the full spectrum of relationships truly worthy of the descriptor “loving.” Being slow to anger is atypical enough to be called out as a positive trait; anger (kissing cousin to hate) is recognized thereby as nearly universally quick to occur. The more I thought about it, the more it seemed that, yes, love is a slow-moving beast, a mammalian embrace that cannot be hurried, while hate or scorn can strike fast as a viper.

I’ve talked to my kids – since they were old enough to pretend to listen – about how the things that matter the most require the most dedication, because they take the most time and energy. Want to learn to play the saxophone? There is time and energy required, and quite a bit of it. Want to develop your skills in math, tennis, or carpentry? Love is one of those things that matters. There are no short cuts. Love is the long road, and one that we travel on foot.

Haters gonna hate, as the saying goes. And we do so prolifically, easily, in the United States of America. One has only to think about the current spectacle of U.S. politics, as I suppose a great many people the world over have been doing in recent years. What is most striking about the nation’s political situation is not that the country is divided (this has become conventional wisdom), and that the division is steeped in animosity (this is the emotional core of our moment). What is most striking is that there is an infrastructure that sustains and accelerates the state we are in.

This is not “who we are.” Americans aren’t more divided and divisive because what people call “human nature” suddenly changed for the 330 million humans gathered within U.S. territory. If we think of “human nature” the way that U.S. philosopher John Dewey thought of “human nature” – i.e., as the cultural state of development of human possibility – we can see that our division and animosity are organized and produced within that arc of development, and that there are features of our cultural environment that are doing the organizing and producing.

Social media platforms, short-form visual propaganda, the meme, and the 140 character tweet, are frequently named, obvious culprits. These comprise a twittering machine that, on the surface anyway, draws us together across vast distances. And yet, underneath it all – like that mythic “human nature” or “national character” people like to imply as cause and origin of our misbehaviors – algorithms invisibly shape the cultural field so that different kinds of utterances can more quickly reach their distinct intended target markets, and so that multiple utterances of common cause (memes, Tik Toks, tweets, decontextualized video clips) can all cluster around our individual heads, like a mass of signifying houseflies. We aren’t drawn together so much as channeled and penned, our differences cultivated by a kind of weird animal husbandry. Commercial interests herd us effectively into niche markets in this way; and a two-party system and its facile outrage populisms herd us into opposing camps, click-baited by conflict-oriented corporate media.

I wonder about the question of speed, though. It is important to notice that the Internet, and the computers whose work and logic it coordinates, is premised on speed, on rapid delivery of message and response. French theorist Paul Virilio points to that same premise as shared by both commercial and military strategy. Virilio coined the term “dromocratic” to name the dominance of the logic of speed in modern politics and social life. “Dromocratic intelligence,” he wrote in his book Speed and Politics (1977), represents “a permanent assault on the world, and through it, on human nature.” Virilio did his thinking about speed before the Internet would emerge as a public illustration of his argument when it passed from its original development as a military technology to its ubiquitous commercial use as a new kind of what Virilio called “habitable circulation,” an architecture of constant regulated movement and velocities.

The spectacular antagonisms of U.S. public life, in other words, are not solely a function of algorithimic penetration of everyday life. That penetration is accompanied by an acceleration of processing, a quickening of the pace of the message-and-response cycle, a shifting of cultural gears that privileges the image over the word, information and innuendo over sustained argument or thought, reaction over reflection, connotation over denotation. Virilio’s decades-old argument resonates strongly with our present virtually-mediated moment: “Let’s make no mistake: whether it’s the drop-outs, the beat generation, automobile drivers, migrant workers, tourists, Olympic champions or travel agents, the military-industrial democracies have made every social category, without distinction, into unknown soldiers of the order of speeds.”

We are all subject, one way or another, to the fast culture of the Internet. In a sense, the Internet collapses the spaces between us much more effectively than the automobile or the airplane ever did. This speed, this simultaneous obliterating of distance and intensifying of separation, has exposed and subordinated the relative slowness of much of our culture. “Snail mail” did not earn its name until electronic mail began to rocket silently and instantaneously from screen to screen all over the planet. The text message outpaces the phone conversation. Can you read a book online? Yes, of course, just like you can write a letter via email. But the relative slowness of the book as a reflective cultural medium, or of the process of long-form writing as a communicative cultural practice, competes for our attention with the reigning velocities of the Tweet and the instant message. So much so that many people still prefer to read a book offline, as if the cultural artifact of the book simply rejects its transplantation to a virtual host.

Through Virilio’s lens, the Internet and its social media can be seen as recently developed “technological vehicles” in an “empire of speed” that we all inhabit: whether it’s the migrant workers, tourists, voters and non-voters, long-haul truckers, soccer moms, veterans, gun enthusiasts, anti-war activists, neo-Nazis, labor organizers, anti-racist activists, or Do-It-Yourselfers, democrats or authoritarians. Fast culture is dominant – culturally, but also politically and economically. Fast culture is based, after all, in the dromocratic logic of the instantaneous global routing of finance capital, and of military strategies for assault and defense. All other sectors of society are playing a losing game of catch-up.

Slow culture – the infrastructure of solidarity, reflection, and deliberation – ranges from potluck dinners and other “barn-raising” habits of community and mutual aid, to books and correspondence and long conversations, to debate and negotiation. In the hierarchy of speeds that governs us, slow culture is a plodding horse hitched to a high-speed automobile. The technology used for the instantaneous global routing of finance capital, and for military strategies for assault and defense, sets the pace for interpersonal and political communication, for news and information.

You can hear and see and feel the resistance to this state of affairs, if you attend to the ongoing work of slow culture. In his book In the Shallows: What the Internet is Doing to Our Brains, Nicholas Carr argues that the intellectual ethic of the Internet re-trains our brains by favoring skimming and impressionistic quick takes, non sequitur-like jumps from topic to topic, and rapid shifts of attention, all to the detriment of the slower and deeper reflection required by book culture. When I read this book recently, I noticed that he concludes his argument with reference to a University of Southern California brain study that found that “the human brain responds very quickly to demonstrations of physical pain” but that “the more sophisticated mental process of empathizing with psychological pain unfolds much more slowly.” In other words, “It takes time for the brain […] to understand and to feel ‘ the psychological and moral dimensions of a situation.’”

The Internet doesn’t undermine our morality, Carr is quick to point out, but that is not the issue. Speed plus morality is outrage, a weaponized morality. (The so-called “culture wars” are a high-velocity phenomenon.) What fast culture does is short circuit the more time-intensive processes that make solidarity the ground for moral (and political) decision making. This is evidently not a problem for global finance capital. But perhaps the social relationships necessary for a healthy society, and for a healthy democratic society at that, aren’t built on speed.

Perhaps it’s time to notice that our politics is being dragged along at the speed of global finance capital, instead of vice versa. Perhaps it’s time to invert the relationship between slow and fast culture. Fast food and fast politics are equally unhealthy. Speed has its moments, but speed is not the way. There are no shortcuts to solidarity. A politics of love takes its time.