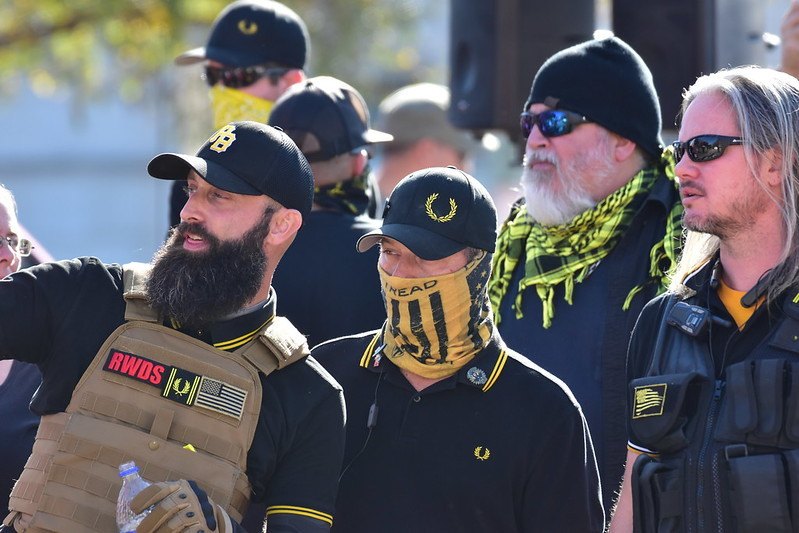 As more and more evidence comes in, much of it reveals collusion between the neo-fascists who were the hard-core and vanguard of the mob and the police, military, politicians and President. While some of the overwhelmed Capitol Police resisted the mob others welcomed it, opening barriers and treating them like tourists — selfies and all.

This collusion was not extraordinary, rather it fits a long- standing pattern with one huge exception: when cops collude with vigilantes, white supremacists and right-wing gangs, it’s always against Black and Brown people or workers. Never is it an attack on the ruling parties or ruling class interests — until now. And, that makes all the difference.

On Jan. 6, a vanguard within the generally disorganized mob was well trained in military tactics and remarkably unafraid of the Capitol Police. Some arrested for their role in the riot were retired or off-duty cops, (including two Capitol Police officers) and nearly 20% of those arrested were veterans. At least 28 off-duty cops were in the crowd. Among those arrested were a white supremacist Army Reservist with a secret-level security clearance and a retired Air Force lieutenant colonel who carried zip-ties and wore tactical gear. One group marched up the Capitol steps in “Ranger File” a tactic used by the US military in Iraq and Afghanistan.

Was this a massive failure of the security forces or something more? More evidence is needed. Of the 2,000-strong Capitol Police only an estimated 500 were on duty. The Capitol Police Chief resigned amid allegations of incompetence. It appears that Pentagon officials restricted the use of National Guard in advance. Now, I’ve been to many, many demonstrations, and scores in Washington D.C. I have been arrested six or seven times for “disorderly conduct” and I have never seen police unprepared. Never.

This was not a “failure” so much as it was the long-standing culture of policing gone haywire. Police, judges and military officials simply don’t see the right-wing as a threat because they are part of the penal system itself. For example, a federal judge actually decided to release the “zip-tie guy” on bail. A major factor, according to the judge, was that the accused showed “apparent and clear respect for law enforcement.” Despite his role at the Capitol and his possession of a huge cache of weapons at home, the accused “does not pose an obvious and clear danger to the safety of this community.” That cozy relationship is what matters.

And talk about cozy, the leader of the Proud Boys had a close relationship with the law when he served as informer and collaborator with local and federal police.

Collusion was the real source of mob power but it was far, far too little to make it anything like a serious coup/insurrection attempt.

There is still no significant evidence that Trump made the preparations and plans that a successful coup or insurrection would have required. Even Trump’s open, deadly, yet unsuccessful coup attempt in Venezuela suggests he understood coup making better than that. If he wanted anything more than the chaotic spectacle that did occur, he did not (or was unable to) put the pieces in place required to make it real.

Despite the fears that members of Congress would be assassinated — something that might actually happen in a real coup — the claim that there were “kill and capture” teams has been walked back by official sources. There was collusion yes but not a single unit of the military sided with Trump. No troops no coup. If you have any doubt just look at the history of US-sponsored coups — that is the model.

This kind of collusion with white supremacists and right-wing vigilantes has a long history dating back to Reconstruction Era when the police were accomplices to the white terror of the KKK. Thousands of lynchings, the Wilmington Insurrection of 1898, the Tulsa Massacre of 1921, the Battle of Blair Mountain, also in 1921, and hundreds of strikes, before and since, were repressed with a similar mix of vigilantes and regular police. During the civil rights movement of the 1960s attacks on activists were carried out in the same way.

This pattern comes right up to recent times when “oil cops” and real cops fought the water protectors at Standing Rock. The paramilitary gangs that police considered “armed friendlies” did their deadly work during the 2020 BLM protests. This mix is institutionalized at the highest level of empire in places like Afghanistan where, mercenaries — deceptively called “contractors,” — have largely replaced the US Army. As reported by Stars and Stripes, contractors now number 18,000, a stunning seven times the number of regular US troops.

The mob and its sponsors were easily overcome with ruling class solidarity against this half-assed but still potent sign of what could be. Was it a challenge to the existing social order? As a symbol perhaps, as reality, not even close. But symbolism matters and it was enough to trigger a ruling class response. The big strong forces of corporate power moved quickly against the weaker forces they usually count as allies: extremist police, vigilantes and neo-fascist gangs.

For a century and a half, vigilantes were used to divide and suppress the working class. They are useful to the bosses but only when they punch down and punch left. If obedient to their master’s voice they get money, immunity and weapons of war. But, go rogue, sack the “Citadel of Democracy,” where the elites conduct their affairs, and it’s punishment time.

We shall see how deep the purge goes. Will there be a major commission to investigate collusion, gross incompetence or both? Likely not. To do so would reveal the racist rot already inside the police. The militarized penal system is one cause of the fascist revival. It’s a “prison-industrial complex” with direct profit interest in a “law and order” regime that includes right-wing violence. The parallel to the military-industrial complex is striking: major corporations with direct interests in war increasingly depend on a network of mercenaries and militias to do the dirty work.

Sooner or later the gang members and rogue cops that got caught will be removed from duty, the rest “vetted” and reintegrated back into the system to serve the broader agenda of corporate power. After all, the underlying crisis that requires violent, forceful social control is not going away. No, the elites will not defund the police.

Vigilantes are acceptable to the real rulers as long as they obey their masters. But, when the masters are no longer of a single mind and broadcast messages encouraging action against the government — as Trump did — the fascists types including some police and military slipped off their leashes.

The mob, thousands more in the legal demonstration and millions of Trump supports were able to delude themselves into thinking that their support for Trump’s “Stop The Steal Steal” conspiracy meant they were still “patriots.” What Trump and his followers missed is that the ruling class craved legitimacy and stability. After four years of Trump they aimed at restoring what they believed to be the steadier government of the Obama years. Social order and harmony are required to maximize profits. To that end, the major ruling class players had already lined up behind Biden and that was that.

To the degree that Jan. 6 — with its brief four-hour occupation of the Capitol — hinted at disrupting ruling class hegemony, the bosses quickly responded demonstrating impressive class solidarity.

The extreme anti-worker National Association of Manufacturers condemned the mob and Trump; the Business Rountable, the voice of large corporate CEO’s did the same; 25 corporate donors put their contributions on pause; all the Democrats and many Republicans closed ranks against Trump. The Joint Chiefs of Staff, the corporate media, and the corporate giants of Big Tech, all moved decisively. Trump’s favorite money merchant, Deutsche Bank, cashed in their chips. Even Trump’s henchmen Pence and McConnell showed themselves trustworthy company men in the end.

Trump — the hero, the celebrity, the President — was outed as a feckless wannabe fascist who committed the unforgivable sin of letting the vigilantes off the leash. So now the state is rounding them up while using the opportunity to deploy a new round of censorship and repression against all social forces outside the order — left and right. Many on the left are cheering this on from what they mistakenly think are their safe spaces under the equally mistaken assumption that there is no alternative to state repression.

The calls for armed protest in 50 state capitols during inauguration week totally fizzled. Almost no one showed despite free national publicity from the FBI. Deindustrialized Michigan, a hotbed of paramilitary activity, drew a very small crowd that was far outnumbered by police. The brief season of dramatic right-wing action revealed the limits of the neo-fascist movement as an independent force.

Fascists can only come to power and stay in power as a result of accommodation with the existing ruling class and military. That may happen someday but not today. The failed attempt at mini-insurrection and the ruling class response proves that.

Will elements within the Proud Boys, QAnon, and others turn on Trump and strike out of their own? Most likely. But, as long as their relationship with the state remains adversarial their power will be limited — at least for now. But the threat remains.

The real struggle against fascism is not some surface conflict between Democrats and Republicans, but a struggle to confront the deep crisis of corporate power and empire both of which enforce austerity on an increasingly miserable and restless working class.

A protracted struggle lies ahead, and it must include a struggle against austerity and for the entire working class. It will be led by the people or not at all. Neo-fascism is after-all, a product of corporate capitalism itself and the vast militarized penal system it needs to maintain order. The corporate state cannot and will not solve a crisis of its own creation.

The post Cops, Vigilantes and the Ruling Class appeared first on CounterPunch.org.