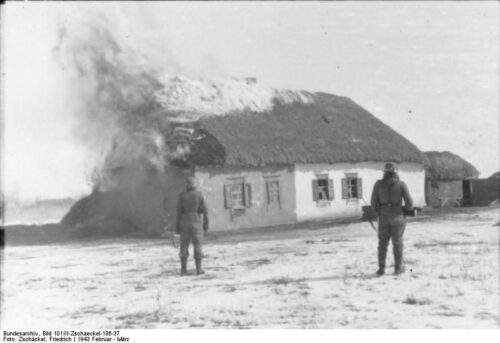 Once upon a time, in a place almost around the corner, a fire brigade arrived in a village in the middle of a snowstorm, at night. The firemen evacuated everyone from their houses crying that the village is on fire. Since it was nighttime everyone was in bed. They were rushed out of their homes with nothing but their bedclothes.

Everyone was standing in the cold, sub-zero night waiting, unable to see any fire, not even smoke– partly due to the heavy snow. The cold started to take its effect and some asked the firemen if it were not safe enough to re-enter and at least get some warm clothing. No, was the reply.

But we cannot see any fire, maybe nothing is burning yet. We can’t take that chance was the reply. Daylight appeared and although snow was still falling neither flame nor smoke was to be seen. However, in front of some homes bodies could be found lying on the ground.

Can we return inside the villagers asked? The firemen pointed to the bodies and answered that there were already some dead from the fire and it was not yet safe to return.

It was still frightfully cold outside. The villagers were still standing in the snow trying to keep warm. The firemen guarded the entrances to the houses, looking vigilant, hoses in hand.

About noon, a truck entered the village from the West. The driver stopped in the village square. A tall man wearing glasses and a heavy pink ski-sweater alighted and opened the back of the truck. There he hung a sign, “blankets”.

By now the villagers were more than desperately cold, some could barely move. A few of them walked slowly through the snow until they reached the truck. Can we have some blankets, they asked, we have been standing here all night because the village is on fire.

The man with the blankets smiled and said sure, but you must pay for them.  Some then turned quickly and ran as fast as the snow and their frozen limbs permitted to the doors of their homes. There they were stopped by the firemen guarding the houses. You cannot go in there! they yelled and blocked the doors.

But you don’t understand the villagers replied, barely able to talk in the cold. We have a chance to buy blankets to keep warm but our money is inside!

We are here to protect you from fire they yelled. You cannot enter; we cannot permit you to risk burning!

But there is no smoke or fire in my house, said one. I do not see or smell any either, said another. We are firemen, we are trained to identify fires, not you, was the reply. Stay away.

So they returned to the square where one or two villagers were leaving with blankets. Where did you get those, asked one? We offered him the rest of our home, since it is all burned by now- so we got a good deal. Thus filled with anger they ran, as fast as they could in the snow, back to the truck.

We have no money now. It is in our homes and the fire brigade won’t let us in to get it. It is so terribly cold. We need the blankets. The smiling vendor said, well, you could sell me your burnt home. But our home isn’t burnt! We just can’t get our money inside, because they say it is too dangerous, that they have to protect us from the fire.

Well, I see your point. I’ll make a deal with you. I have these shovels. If you will dig a hole in front of your house, I will give you the blankets for free. But it has to be a big hole.

The biting cold had sapped nearly all their strength but they agreed. Taking the shovels, they again ran, as quickly as snow and frostbite would allow, back to their homes and began to shovel. They felt secure that they had saved their homes until the fire was extinguished. They dug with passion into the night.

When the sun rose the next morning each was covered with a blanket.

This article was posted on Friday, February 12th, 2021 at 1:12pm and is filed under Propaganda, Psychological Warfare.