Amid the pandemic, lockdown orders, and nationwide protests against police violence, a historically large increase in murders occurred in 2020. Previously, the largest recorded one-year rise in murders in U.S. history was a 12.7 percent increase in 1968. Last year, meanwhile, data from nearly 12,000 law enforcement agencies released by the FBI, running through September, shows murders up 21 percent nationally. This matches data we collected from a sample of agencies from 60 large cities showing a 36 percent increase in murders in those cities, as well as a Council on Criminal Justice analysis from 34 cities finding a 30 percent increase in 2020 compared to 2019. This increase still leaves the murder rate nearly 40 percent below the peak rate reached in the 1990s.

Any explanation for the national spike in homicides in 2020 needs to account for why most U.S. cities saw an increase, and the available evidence suggests that we should avoid simplistic or local explanations to explain what was almost certainly a complex national phenomena. Murders were up at least 15 percent through September in cities of every population group, according to the FBI’s data, and the change in murders was larger in towns with under 10,000 people (up 31 percent) than in cities with over 1 million people (up 29 percent). Murders rose dramatically in big cities like New York and Chicago, but smaller cities like Lubbock, Texas, and Shreveport, Louisiana, also recorded their highest murder counts in decades.

The available evidence suggests that we should avoid simplistic or local explanations to explain what was almost certainly a complex national phenomena.

Identifying the change in the murder rate is relatively easy compared to figuring out why the increase occurred. The data suggests that 2020’s murder increase can best be thought about as three separate rises. A deeper dive into where and when murder increased shows a number of contributing factors: a challenge to police legitimacy and the strain of the pandemic, exacerbated by a sudden surge in the use of firearms in several cities.

“It likely takes more than one factor to create a spike of this size. That means it wasn’t just the pandemic, or police violence, or more guns, it was all of these things happening simultaneously and perhaps more,” said Thomas Abt, director of the National Commission on Covid-19 And Criminal Justice and co-author of its report of 2020 crime trends.

First, murder was up in the United States during the early spread of the novel coronavirus, before lockdowns were even ordered. The FBI’s report — which does not include data on big cities like Chicago and Philadelphia — found murder rates up 7 percent in its sample of cities through the first quarter of the year.

We found murder was up through April relative to 2019 in 11 of 14 cities that publish monthly murder data. Princeton University sociologist Patrick Sharkey found that fatal shootings had risen 75 percent in the 99 largest cities through April. It’s not fully clear what caused the murder rate to be higher early in 2020 compared to 2019, though a variety of factors such as increased domestic violence early in the pandemic, warmer weather, or just plain randomness may have contributed.

Violence accelerated throughout the summer in the second phase of 2020’s murder increase. Cities across the country had big increases in gun violence over the summer. Murder was up 15 percent through June in the FBI’s data, and many cities saw sudden and dramatic upswings in July and August. Portland, Oregon, for example, averaged nine shootings per month over the first six months of the year, but there were 35 and 36 in July and August respectively. In Omaha, Nebraska, 32 people were nonfatally shot in July 2020 compared to 4 in July 2019. Shootings in New York City increased from 123 in July 2019 to 316 in July 2020, and 497 people were shot in Philadelphia in July and August 2020 compared to 276 over the same months of 2019. It is certainly possible that local factors played a role, but a change this sudden and widespread calls for a more comprehensive explanation.

One theory for why gun violence increased over summer suggests that changes in policing tactics, both during and after last summer’s protests, caused the rise. It is not clear, however, that a change in policing tactics was the main cause.

In New York City, for example, looking at data for just 2020 suggests that a change in policing as a plausible explanation for the rise in gun violence, as arrests fell 39 percent in the summer relative to the first three months of 2020. A longer view, however, shows that arrests in New York have been dropping for over a decade — including a big drop in arrests in April 2020 — with no clear impact on gun violence citywide. Similar sudden, large drops in drug and illegal weapons arrests, which are proxies for proactive policing, over the last decade have not previously been associated with large increases in gun violence in New York. 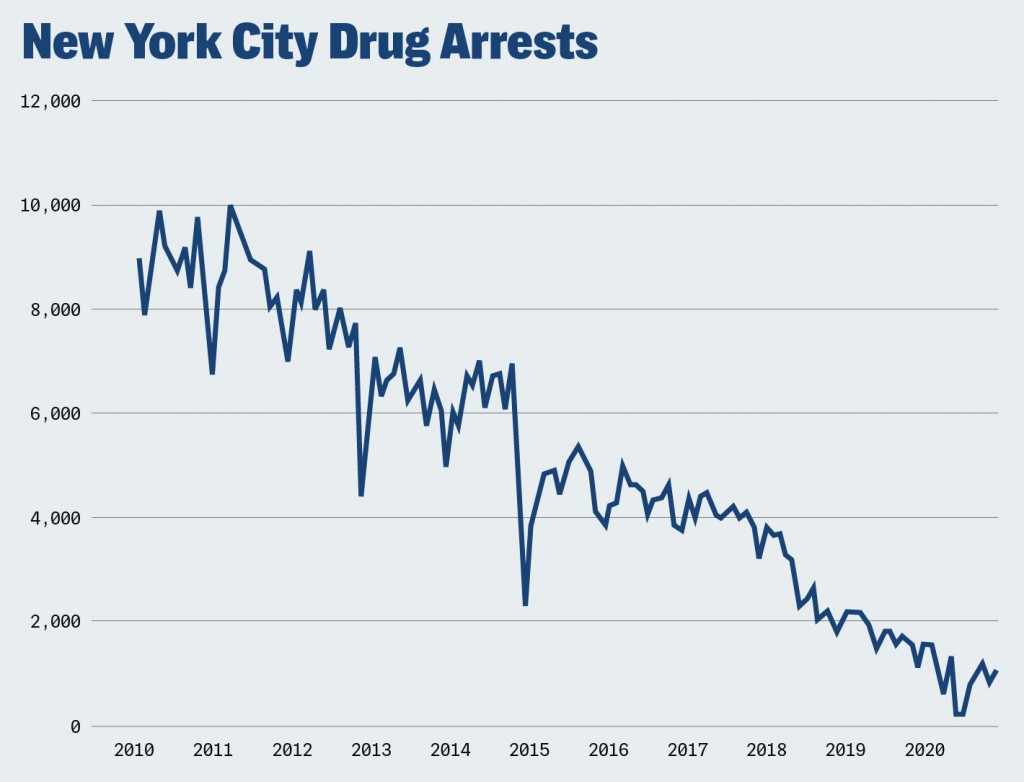 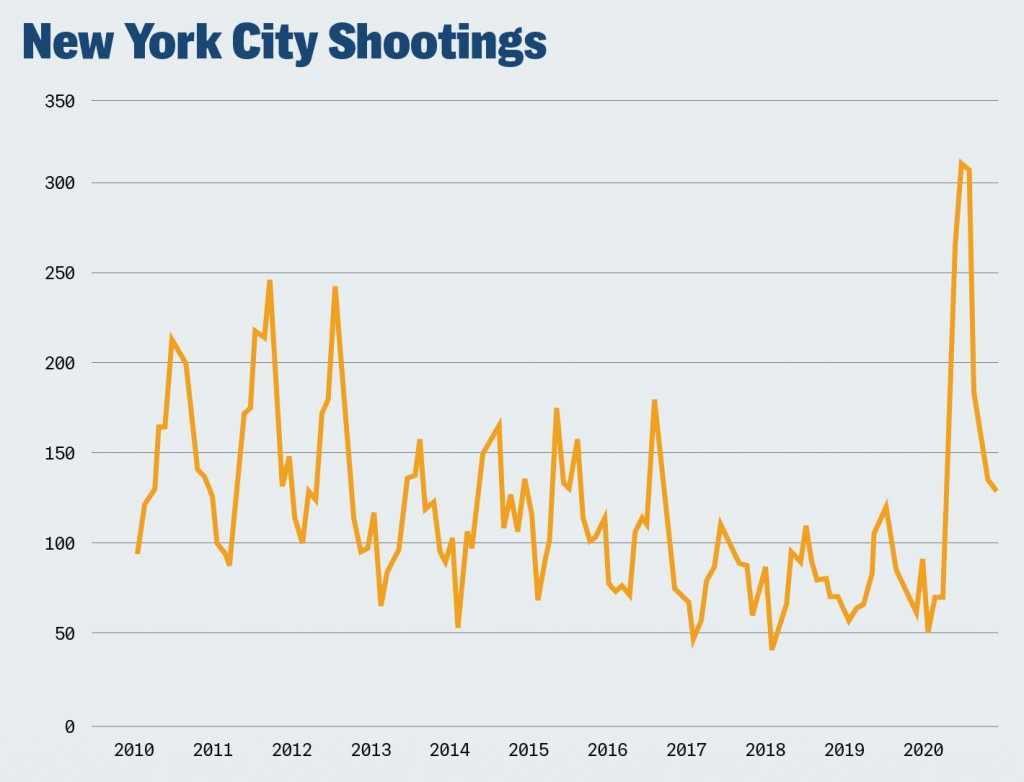 It’s certainly possible that murder rose because police were dedicating more resources to responding to last year’s protests. If this was the case, then it might make sense for murder to increase the most in places that had the most protests. But there wasn’t any connection between the number of Black Lives Matter protests and the change in murder in big cities, according to an analysis of protest data collected by the Armed Conflict Location and Event Data Project. This analysis does not account for the scale or potential destructiveness of protests, but it does suggest that police deployment driven by the number of protests in a city is unlikely to be a major culprit for the rise in murder.

Changes in how the public perceives the legitimacy of policing — caused in part by the highly publicized killings of George Floyd, Breonna Taylor, and others — may have driven violence up. “Because of broken trust with community members, some members are less likely to rely on police, provide information, and serve as witnesses, among other things,” said Abt. “Ultimately that means fewer violent disputes being solved through the formal criminal justice system, and more of them dealt with informally through retaliation, causing homicides and other violent crimes to increase.”

The third phase of increasing murder likely occurred in the fall. Murder was up 21 percent through September compared to being up 15 percent through June, suggesting that violence was continuing to get worse. The year-to-date change in murder was higher through October than through July in 9 of the 14 cities with monthly murder data available, and an analysis from Boston University’s Research on Innovations for Safety and Equity, or RISE, found a second increase in murder in October in a 34-city sample. New Orleans, for example, averaged about 1 shooting per day in March, almost 2 shootings per day in July, and around 2.5 shootings per day in October.

Pandemic fatigue alongside the worsening economic and psychological strain of life under lockdown could have driven this third wave of violence. “The coronavirus pandemic has concentrated in precisely the same communities where high rates of crime and violence concentrate. When people in these communities are placed under additional strain, they’re more likely to make bad decisions, just like we all are. This pushes the risk of violence even higher,” Abt said.

2020 finished with more total background checks (a proxy for firearm sales) than any year on record.

Homicide was up 30 percent relative to 2019 according to RISE’s analysis, but gun homicides were up 39 percent relative to 2019 in their sample, highlighting the role of firearms in last year’s historic murder increase. As the pandemic began, fearful citizens rushed out to buy firearms in record-breaking numbers. Sales spiked in the spring, and 2020 finished with more total background checks (a proxy for sales) than any year on record: 39 percent higher. Although newly purchased guns usually take years to reach use in crimes, according to Bureau of Alcohol, Tobacco, Firearms, and Explosives data from 2019, about 10 percent of all guns are used in the commission of a crime within six months after purchase. Adding 19.2 million new guns from January to June, 5 million more sold than in the same timeframe in 2019, equates to potentially half a million more weapons available for use in crimes in the remaining months of 2020.

An influx of guns cannot directly cause an increase in murders: People must be willing to use them. But evidence suggests that after firearms sales increased, people started employing weapons in crimes more often than ever before. “Where guns are important is in what happens as a consequence of an attack. The use of a gun as opposed to a knife or a club or other weapon intensifies the violence and makes it more lethal,” said Philip Cook, a professor emeritus of public policy at Duke University. 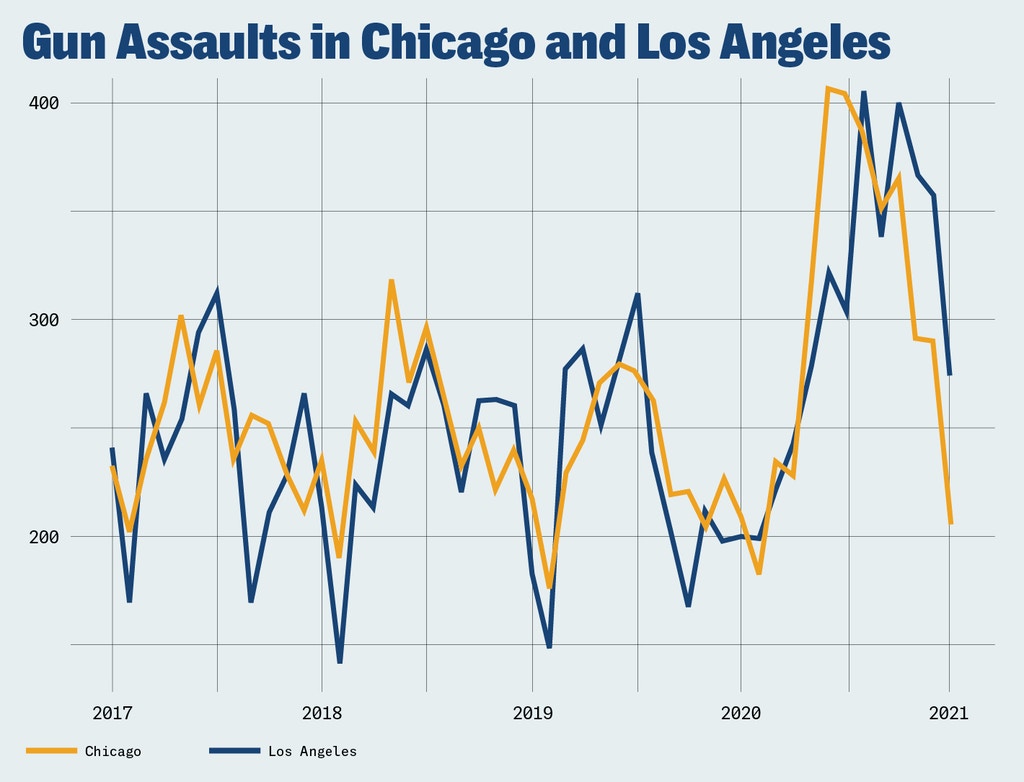 The number of assaults with firearms each calendar month in Chicago and Los Angeles.

The ratio of assaults with handguns to those without reached the highest level in at least 20 years of recorded Chicago data. Other cities showed similar patterns. Los Angeles crime data showed offenders used guns more often in crimes than in any year since at least 2010, the earliest data was available. Louisville, Kentucky, had a large jump in the share of murders committed with guns, and many cities experienced increases in gun seizures even while other kinds of arrests declined.

“So what you see is that as gun availability increases, a higher percentage of the crimes are committed with guns, and as a result there are more deaths than there would be otherwise,” Cook said.

Because the FBI does not release full national data on crime for nearly nine months after the year in question, the landscape of crime across the nation is still uncertain. The Bureau of Alcohol, Tobacco, Firearms, and Explosives also does not release the limited information it collects for months. Crucially, the ATF does not track the chain of custody from a gun’s initial purchase through subsequent secondhand purchases or thefts into use in a crime, making it impossible to know exactly how surges in gun purchases translate into greater availability of firearms among those who use them to commit crimes.

This information vacuum leaves the role of various factors like gun availability in driving murder — as well as the underlying causes of the increase in violence in these cities — murky and uncertain. Although some of the reasons behind the increase in murders are likely to abate in 2021, like the stress of the pandemic, others will have a longer-term effect, like the surge in firearm sales and changing perceptions about police. It’s possible that the complex stew of forces that drove murders higher in 2020 will continue to impact the homicide rate for years to come, so better data collection and an improved understanding of the causes of 2020’s murder rise is critical for implementing smart policies to reverse this trend.