The last time that the pay of the rich— corporate profits and gains on speculative wealth, failed to rise for a few months in a row, a revolution ensued. The revolutionary method, now called neoliberalism, was well under way by the time that Ronald Reagan was elected to the presidency in 1980. It emanated from economic and political power— the establishment, and it relied on discrediting the central institutions of the New Deal, including the very idea of a public purpose, to impose a tyranny of capital. To date, the sentiment that this power has shifted goals, rather than tactics, is belied by the provisional nature of recent reforms.

The question of why elected officials are required to consider the consequences to the Federal budget of raising the minimum wage, which is paid by private employers, is simple: they created the process that way. First passed in 1990 and updated in 2010, PAYGO is the Congressional rule requiring that new legislation that impacts the Federal budget be offset by cuts to government spending elsewhere. The origin of PAYGO was Reaganite efforts to slash social spending using the pretext of a budget crisis. The method was to divert money into private coffers via military spending and then pretend that arbitrary budget rules required cuts to social expenditures. 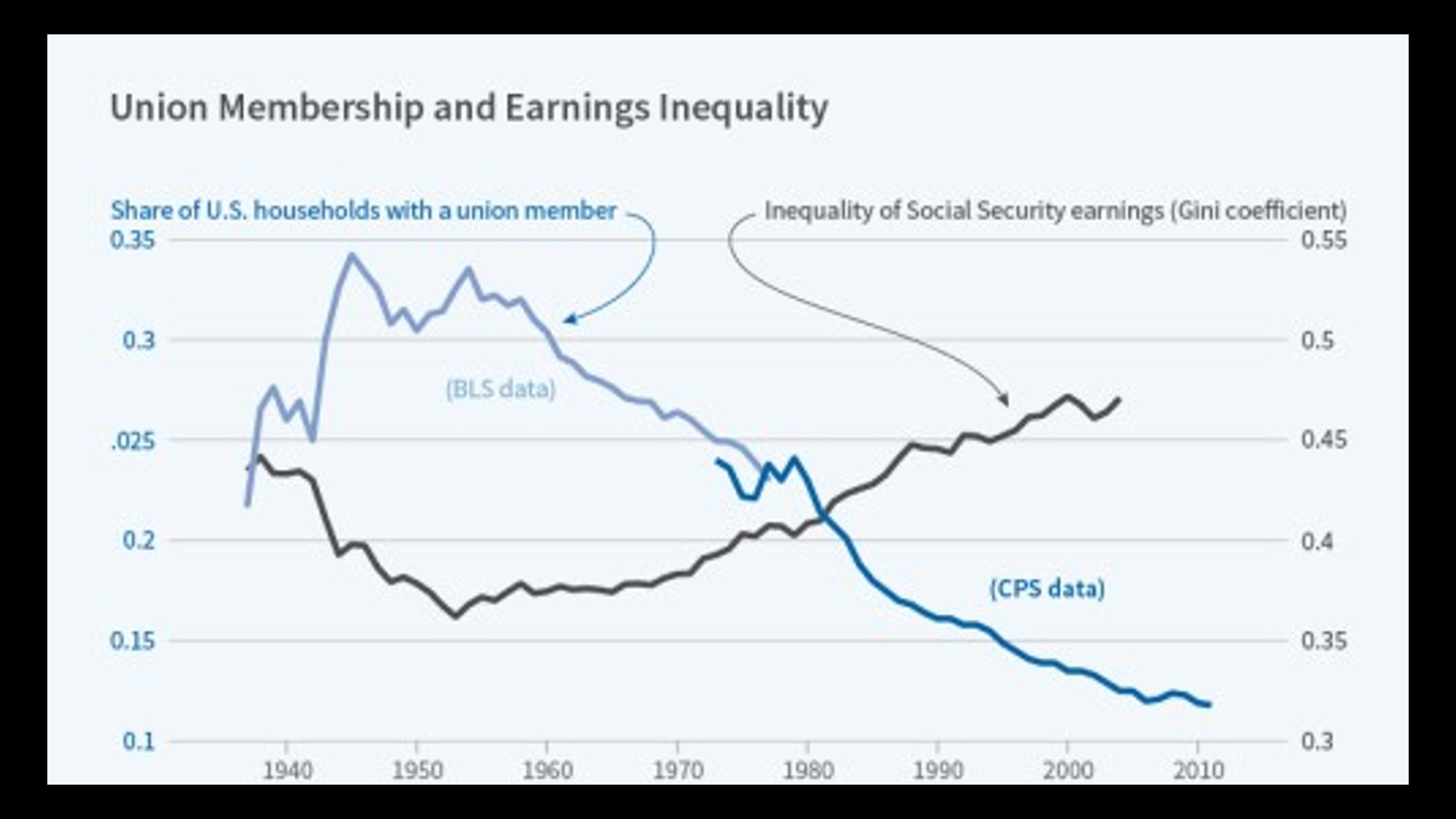 Graph: labor unions exist to balance power between employers and workers because markets don’t do this. The decline in labor unions resulted in employers taking ever larger shares of labor’s product for themselves. Raising the minimum wage is a partial step toward addressing this power imbalance. It is also key to determining whether the Democrats are serious about rebalancing power or simply posturing to mislead their nominal constituents. Source: Mark Thoma / Economist’s View.

Raising the minimum wage would only impact the Federal budget indirectly— through changes in tax receipts that result from the legislation. Through PAYGO, legislators and the White House can claim that the hindrance to raising the minimum wage is a budget constraint that they created, rather than on the demands of their corporate benefactors. Great Depression-era economist John Maynard Keynes gave them an out through tying wages to consumer spending. Employers benefit from raising wages when circumstances are amenable. PAYGO is the legislative rejection of Keynes’ out.

The question of why Democrats would claim they will raise the minimum wage and then undermine the effort with an arbitrary budget rule hasn’t yet been answered. Hopefully this means that the door to do so is still open. As I understand it, the near-term issue is that the White House pre-settled on a dollar amount of pandemic-related government spending. Through the maneuver, they limited their ability to raise in the minimum wage. The question of intent will be answered in future legislation. If they raise the minimum wage, then they intended to. If not, they didn’t. 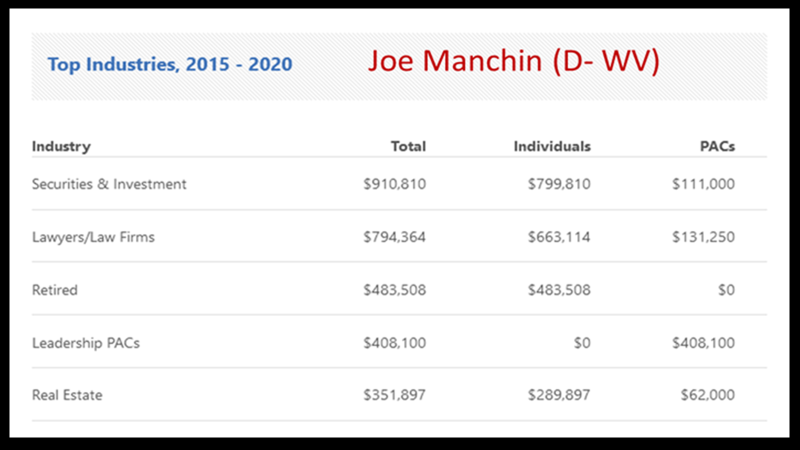 Table: the contention is regularly made that Blue Dog, obstructionist, Democrat Joe Manchin represents the conservative citizens of West Virginia. In fact, Wall Street, corporate lawyers and the Real Estate industry pay Manchin’s bills. He represents these interests against the people of West Virginia. Only in America could a corporatist, neoliberal, hack like Manchin be treated as a representative of ‘the people.’ He could be voted out of office if the DCCC would made stop supporting right-wing incumbents against left-wing challengers. Source: opensecrets.org.

While the pandemic is the proximate cause of current petite bourgeois and working-class economic travails, the capitalist revolution of the 1970s resulted in four-plus decades of stagnating wages punctuated by regular crises. The economic recovery from the Great Recession saw the creation of a gig economy that liberated workers from regular paychecks, living indoors, and food security. Claims that gig-work wasn’t a significant part of overall employment were proved misguided when pandemic-related gig-worker unemployment claims showed up in the multiple millions.

The Columbia University study that claimed that the American Rescue Plan would ‘cut child poverty in half’ maintained the premise even after raising the minimum wage had been removed from it. In fact, raising the minimum wage was the permanent part of an otherwise temporary relief program. The program is constructive in that it provides temporary relief to people in need. More broadly, it demonstrates that child poverty is a political choice. But there is a difference between ‘cutting child poverty in half’ and disrupting it for a few months. 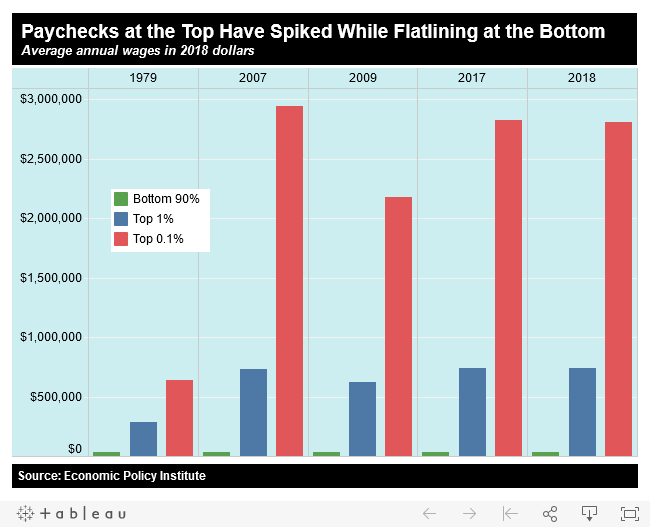 Graph: the problem of stagnant wages isn’t concentrated amongst workers at the very bottom the income distribution. In the aggregate, 90% of the population hasn’t gotten a raise in four decades. Contrast this with pay raises at the top, and the problem isn’t a shrinking pie. It is a growing pie where all of the growth accrues to a tiny group of oligarchs. Raising the pay of the lowest paid workers— as raising the minimum wage would do, is a small but necessary step toward righting this maldistribution. Source: inequality.org.

The ‘politics of resentment’ that motivate the political right in the U.S. are tied to welfare state policies intended to both serve capitalism and ameliorate its failures. The culture-war sentiment that social expenditures are a gift to favored groups at the expense of others is the ugly twin of liberal ‘culture of poverty’ theories that blame culture, rather than dysfunctional political economy, for systemic economic failures. Even if an economic recovery from the Great Recession had been successfully engineered, it isn’t clear that jobs that provide steady employment at living wages would have been the result.

When NAFTA was being debated in the early 1990s, economic redistribution from its ‘winners’ to its ‘losers’ was central to the argument that there was a national interest in the policy. Otherwise, getting working people on board with making the 1% richer at their expense was too conspicuously anti-democratic to be politically viable. Economist Paul Krugman— the liberal voice selling trade policies, has written at length about how necessary re-distribution of the gains from trade was to rendering NAFTA socially and economically legitimate. This redistribution never took place.

The point here is twofold. The labor market that emerged after NAFTA was passed had an embedded bias toward the interests of capital and away from the interests of labor. In market terms, it was a rigged market. Secondly, as economist Dean Baker has detailed, some jobs, professions and industries remain protected while workers in others were left to ‘compete’ with low-wage labor internationally. This impacted both the level of wages and the employment mix. Workers in protected industries benefited relative to those cast aside. The premise that markets determine wages begs the question of what determines markets?

The question is ultimately what wages are politically sustainable? A bus driver is paid to be a bus driver regardless of whether or not they have a Ph.D. in particle physics. If there are no jobs for particle physicists, the ‘human capital’ simply isn’t compensated. Given this type of mismatch, which is quite common, the claim that wages provide a defensible equivalence relative to what workers bring to the wage relation isn’t prima facie evident. The ‘deskilling’ of the 1990s and 2000s was to cut wages for workers in jobs for which anyone who could fog a mirror was overqualified. That was the point.

This represents such a grim view of both work and the human condition that it requires comment. Wages are but an aspect— an important aspect, of working life. Through the class antagonism embedded in the wage relation, the debasement of work is a tactic to so narrowly define the labor for which compensation is being offered that it is considered separable from the human being who provides it. In this sense, deskilling it conceptually related to all work that fails to provide a living, e.g., gig work. Additionally, it illustrates the point that power lies in the ability of employers to define the labor relationship.

Right-wing perceptions of unfair advantage by the recipients of social welfare are tied to the same capitalist delusion of self-reliance that motivates the rich to avoid paying taxes. Ironically, the PMC (managerial class) conceit of merit presumes a similar self-reliance. If people are singularly responsible for their own economic circumstances, then those in lesser circumstances are similarly responsible for them. Within this frame, social welfare is to take from those who earned it to give to those that didn’t. This is implied through the PMC’s conception of ‘merit’ as just distribution through markets.

However, the use of government policies to favor some classes, sectors and industries while tossing others to the wolves means that wages levels are by degree determined by government policies, not by markets. The punchline is that markets are always determined by social relations, not determinants of them. The Federal decision following WWII to maintain military production to support ‘the economy’ drew workers from other sectors who were paid wages that wouldn’t have existed without the programs. In retrospect, the world would be a better place if these workers had been paid to grow vegetables in their yards.

The premise that what was produced— materiel and instruments of destruction, represent ‘a contribution to society’ because they were compensated ties to the oligarch / right-wing / PMC / neoclassical economist conflation of price with value. But again, the world would be a better placed if the materiel and instruments of destruction hadn’t been produced. How is this military production not a debasement of the very idea of work in the same sense that deskilling is? This isn’t to begrudge anyone a paycheck. It is to call into question the nature of capitalist employment. That is a question that raising the minimum wage won’t answer.

Largely forgotten in the back-and-forth is that implementing the wage relation— never mind a minimum wage, was hard fought and remains politically fraught. Wage labor breaks potentially cooperative economic relations into the class antagonism of employers who benefit from low wages versus workers who benefit from high wages. Even still, the history is of employers devising ways to coerce labor through slavery, stolen wages, and through creation of untenable circumstances unless labor is supplied. Raising the minimum wage is critical because it would raise the living standards of the working poor. And it would modestly empower them. But it should be a starting move toward economic democracy, not the end of it.