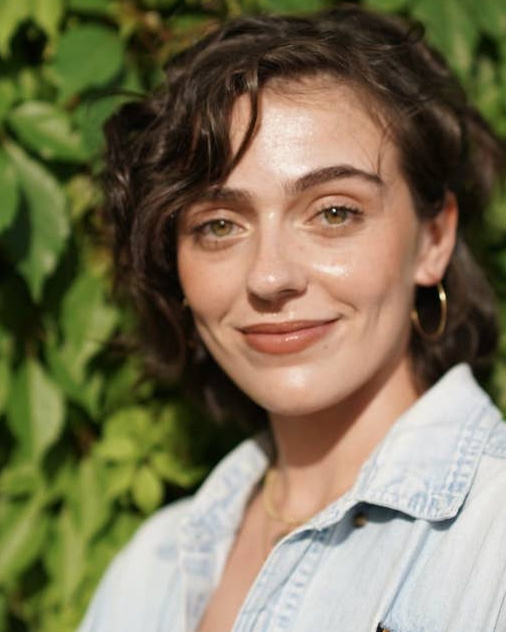 Emily Wilder, fired by AP after 16 days on the job. (photo: Angel Mendoza)

Emily Wilder had thought she’d hit it big. After interning at the Arizona Republic, she earned a newsroom assistant job at the Phoenix bureau of the Associated Press, starting May 3. It wouldn’t last long.

Several right-wing organizations, including the Federalist (5/19/21) and Washington Free Beacon (5/18/21) outlets, attacked the news service over Wilder’s previous affiliation with Students for Justice in Palestine, when she was an undergraduate at Stanford University. AP, which recently had its office in Gaza destroyed by Israeli missile fire, bowed to the pressure (Washington Post, 5/20/21).

The company told the Guild that Wilder had violated the Social Media Policy that was negotiated with the union and by which all employees are required to comply. AP noted that the policy was specifically brought to her attention after her hiring, but did not specify which comments caused her termination. The Guild asked if the comments that caused her termination were posted before or after her hiring, and awaits a response.

This is a thin excuse from AP. Wilder told SFGate (5/20/21) that some of her past social media posts had been highlighted in a thread from the Stanford College Republicans, such as one calling Sheldon Adelson a “far-right, pro-Trump, naked mole rat–looking billionaire.” SFGate reported that “Wilder…said she would not have used such language today,” and that “not long after the thread started to gain steam on Twitter,” an AP editor told Wilder that “she would not get in trouble for her past activism and social media activity.” Wilder described her “firing as selective enforcement against those who have expressed criticisms of Israel.”

Wilder told FAIR in a phone interview that “to anyone with eyes and ears and brain,” the fact that her firing came after right-wing trolling “is no coincidence,” and that “it feels like it was a convenient opportunity to make me a scapegoat.” Wilder said that AP brass haven’t told her which of her posts were the reason for her firing, or what line she crossed. She noted that her views on Israel/Palestine were irrelevant to her work, which was entirely local. “I might have been one of the youngest employees at the AP,” she said, adding that her opinions as a “citizen, as a young Jewish woman, have nothing to do with the work that I’ve done.” 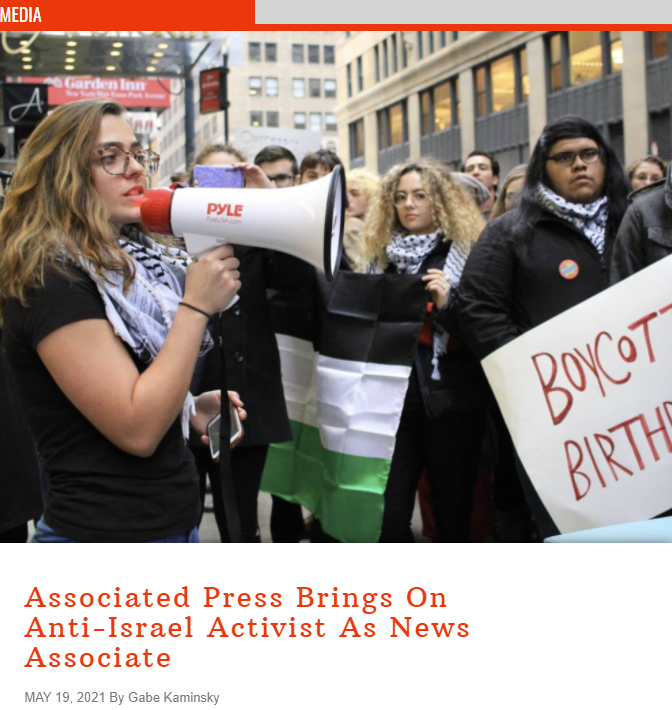 The first reaction of many supporters of Palestinian rights was that the firing was an example of just how eager and able right-wing organizations are to ruin the career of anyone who dares speak out about social justice in Israel/Palestine. Would someone who interned at AIPAC and/or shared memes from the IDF’s Twitter account be treated the same way? And it’s of course another example of hypocrisy: While the right talks a lot about fighting “cancel culture,” it is one of the biggest agitators for silencing speech it disagrees with (FAIR.org, 10/23/20), especially when it comes to Palestine.

This comes at the same time as Pulitzer Prize–winning journalist Nikole Hannah-Jones was denied a tenured position at the University of North Carolina school of journalism (Inside Higher Ed, 5/20/21), with the university’s board of trustees overruling the school’s hiring process. Given that much of the negative attention against Hannah-Jones comes from conservatives who focus on her role in the New York Times’ “1619 Project” (8/14/19), a feature that looked at US history through the lens of slavery, the event seems akin to what happened to Wilder—with the right essentially exercising veto power over hiring at prestigious institutions. These incidents aren’t outliers: Right-wing activists successfully forced the Times to fire an editor for “tweeting she had ‘chills’ at seeing Joe Biden’s plane land” (Guardian, 1/25/21), and the Guardian fired columnist Nathan Robinson for making a joke about US support for Israel (FAIR.org, 2/22/21).

But beyond the censorious power of the right, there’s something else in corporate journalism’s culture to blame here, and that is its obsession with “objectivity“—not just in coverage, but in the expectation that full-time journalists be completely neutral in the issues of the day.

Ideally, a news organization would not want its Jerusalem correspondent to have conflicts of interest while covering the Middle East conflict, although FAIR has found plenty of pro-Israel conflicts of interest at the New York Times (Extra!, 4/10, 5/12) and Washington Post (FAIR.org, 9/26/13). It isn’t uncommon for newsrooms to have rules about political correspondents not giving money to candidates (though these rules don’t necessarily apply to their corporate bosses—FAIR.org, 11/5/10).

The Washington Post recently told its staff about what behavior was acceptable off the clock. According to Washingtonian (5/3/21), the memo said, “Context matters: It would be fine to participate in a celebration at BLM Plaza but not a protest there, or attend a Pride gathering but not a demonstration at the Supreme Court.” The memo also said of DC statehood: “A shirt with the flag of the District of Columbia is fine. One supporting statehood would not be—that would be an expression of public advocacy on a matter we cover.”

In this case, AP hired a young woman who graduated from Stanford, perhaps the most prestigious American private university west of the Mississippi River. What kind of education should someone with worldly intentions receive in order to travel and report on the world? Someone who never debated in political science class? Someone who never had to have their views challenged? Someone who has never been motivated by passion to learn more and conduct research? 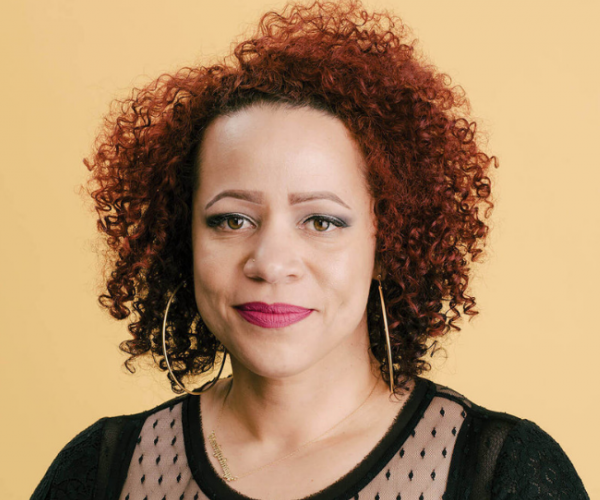 Pulitzer Prize–winner Nikole Hannah-Jones was denied a tenured position by the University of North Carolina board of trustees after right-wing attacks on her ideas.

Professional journalists have all sorts of backgrounds. New York Times reporter C.J. Chivers previously served in the Marine Corps, an experience that shaped how he has covered war and insurrection (New York Times, 6/23/20). It’s common for reporters to take a break by working in public relations, and then return to journalism. The point here is not that objectivity is wrong, but rather that it doesn’t truly exist. No one walks into a newsroom for a job without a worldview, or unsullied by affiliations with groups that might end up being newsworthy. Reporters should strive to get the facts right, talk to all sides, take a step back from a story and paint it fairly. But no one can be expected to be a robot even before their first day on the job.

Obviously, any news organization might have misgivings about having someone on staff with a past of promoting violent extremism—like a member of a white nationalist organization—or someone with a history of fringe conspiracism. There are disqualifying factors, but reasonable people should be able to recognize those exceptions. These days, college campuses pride themselves on their activist organizations, acknowledging that activism beyond the classroom is often part of education. As the Supreme Court noted in Regents v. Bakke, “The nation’s future depends upon leaders trained through wide exposure to that robust exchange of ideas which discovers truth” through dialogue and debate. Employers like AP should want well-rounded recruits who have gone through that kind of dialogue.

But Wilder told FAIR that the vagueness of when such standards of objectivity apply meant these standards could be “asymmetrically imposed on certain journalists in a way that has censored and policed journalists before me.”

Wilder said she worried that her firing will dissuade “aspiring journalists who have opinions and have righteous outrage and want to channel that into storytelling,” and that AP damaged its mission and commitment to standards, because it “sacrificed someone with the least power to this kind of trolling and bullying from random bad-faith actors.”

ACTION ALERT: You can send a message to AP through this web form (or via Twitter: @AP). Please remember that respectful communication is the most effective. Feel free to leave a copy of your message to AP in the comments thread of this post.

This content originally appeared on FAIR and was authored by Ari Paul.