Like any African who grew up with a TV,  I’ve always been exposed to Western perceptions of Africa. Living in a postcolonial African education system that still relies heavily on Western literature, one becomes intimately aware of how the world sees Africa.  Still, I have always bristled against what is now famously called “the single story,” which presents Africa as a one-dimensional scene of tragic suffering and endless despair. Coverage of Covid-19 in Africa, despite the continent’s relatively low infection rates, is disproportionately grim and macabre compared to the rest of the world, as two New York Times articles illustrated. 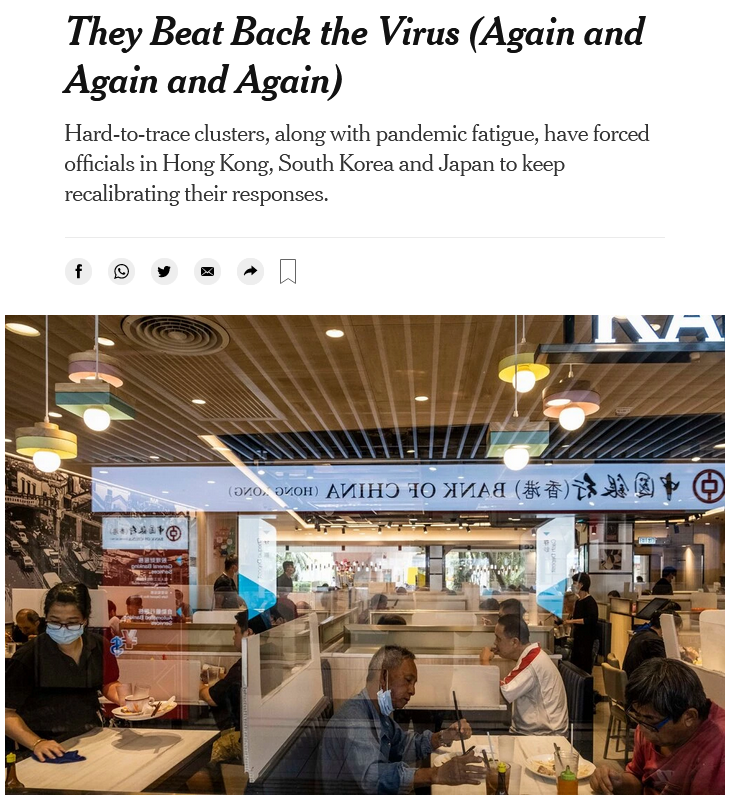 When the New York Times (11/27/20) covers the fight against Covid in specific East Asian locales, officials from those places are key sources.

Last November, the Times (11/27/20) published a lengthy article about efforts in East Asia to fight Covid. Headlined “They Beat Back the Virus (Again and Again and Again),” it focused on three places (Hong Kong, Korea and Japan), outlining long histories of policy implementation and strategic tweaking by their health officials to combat wave after wave of the coronavirus.

The article interviewed an epidemiologist from Hong Kong University, quoted an infectious disease specialist at Korea University in Seoul and cited a statement from the president of the Japan Medical Association. Strategies were outlined and nuance was applied to the successes and failures that officials have faced in fighting back this deadly disease:

“We need solidarity in this kind of situation, but as everyone knows, it’s not easy,” said Dr. Kim Woo-joo, an infectious disease specialist at Korea University in Seoul.

“We’re getting better at having a large testing capacity, and we have a lot of resources for contact tracing, but the cycle repeats,” said Kwok Kin-on, an epidemiologist at the Chinese University of Hong Kong.

Photos in the article featured people wearing masks in public places in Tokyo; one showed a temperature check at the door of a business in Hong Kong, and another had staff and students standing in a line of chalk outlines that maintain social distance in Korea.

‘Where the dead are not counted’ 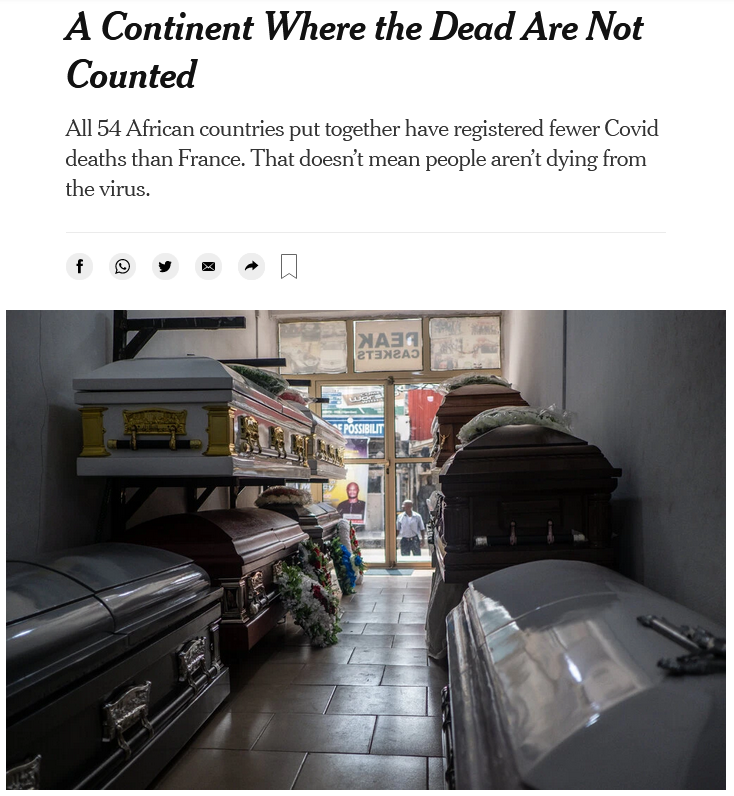 In contrast, a New York Times article (1/2/21) by West Africa bureau chief Ruth Maclean, headlined “A Continent Where the Dead Are Not Counted,” compared the death toll of all 54 African nations to France, and concluded that because the former has fewer official deaths than the latter, their calculations (all 54 of them) couldn’t possibly be correct. The subtitle teased us to a possible explanation in a somewhat conspiratorial tone: “That doesn’t mean people aren’t dying from the virus.”

The first expert whose guidance is sought to make sense of Africa’s Covid response is a professor at New York University. (He has since denounced the article as unrepresentative of his research and stance on the matter.)

The next expert is a director of Medicins Sans Frontieres (Doctors without Borders), a French national who appears to be based in Dakar. Though his voice might be the article’s only hint at the notion that good African policies possibly reduced the spread of Covid, Maclean quickly discards his input for more exciting news out of England about secret outbreaks in Sudan. The next expert is a researcher at the London School of Hygiene and Tropical Medicine, whose “toes curl” when anybody implies “Africa has been spared.”

While the article is chock full of people talking about Africans, there are only three sources from Africa and in Africa featured in the article, all from Lagos, Nigeria. The first we meet posthumously, and he is described as a man whose entire being comes down to his desire to dance and fight.

The second is a registrar at a government office, who is described as being surrounded by “stacks of papers, registers and perforated books” in a badly-lit office, and has one line: “If they don’t need [death certificates], they will not come.”

The last is the manager of a casket store, who is pictured standing stiffly in front of his store, and is said to point out that the expensive caskets come from America. His main contribution to the article is the line: “The mortuaries were jam-packed.”

These men represent the full intellectual extent of African public health because, according to a caption under a photo of coffins, “funeral home directors and coffin salesmen often know when there is a spike in deaths.” 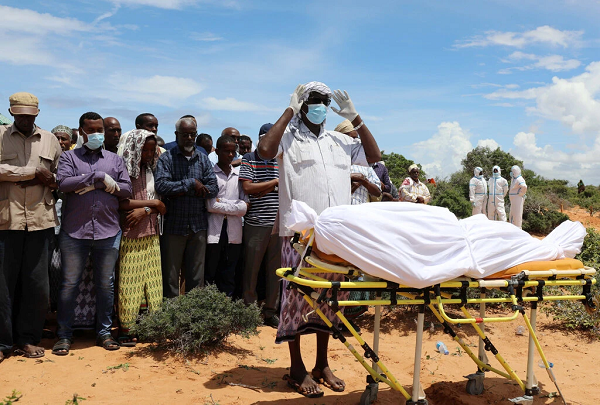 The New York Times (1/2/21) illustrated its story on Covid in Africa with a photo of a dead body in Somalia, though that country is not otherwise discussed in the story.

The first photo in the African article is a row of stacked caskets captured in the dim lighting of a strip mall store. The next photo is a corpse wrapped in plastic in Mogadishu, Somalia (a city and country that are mentioned nowhere else in the article), and appears to be taken at a funeral, while the deceased’s loved ones clearly mourn the death. The next photo is of a man in Lagos standing in front of a funeral home, and another photo depicts a casket. While thousands of people had died from Covid in East Asia, the photos in the article about Japan, South Korea and Hong Kong notably feature zero corpses or caskets.

The first article was co-written by Mike Ives, Tiffany May and Mikoko Inoue, reporters who appear to be residents if not natives of Hong Kong and Japan, with additional reporting from Youmi Kim, based in South Korea. That’s four reporters covering three locations, in contrast to one reporter purporting to cover 54.

The photos in the Asia article were from the locales in question. And the experts included local academics, who were not asked to comment on the Covid strategies of every country in Asia, but were allowed the space to express nuanced reflections on their local crises.

The officials interviewed were presumed to have the correct data. There were no Western universities quoted, no Orientalists consulted. The people of Hong Kong, Japan and Korea were treated as distinct populations who could speak well enough for themselves.

Though Asia had many confirmed deaths from Covid, the article did not feature photos of Korean corpses, or Japanese people mourning a loved one, or a Hong Kong coffin seller hawking caskets decorated with “gilded reproductions of the Last Supper.” Nobody’s name was shared, and nobody’s life was summarized in a two-line characterization so cartoonish even Wainaina himself would doubt its sincerity.

Carrying on a tradition of Western inquiry spanning centuries, the Times‘ Maclean does not appear to expect to encounter locals who have solutions or have really thought about their predicament. They aren’t even given the chance to explain that Nigeria is not Sudan is not Somalia is not—oh that’s it. The article about Africa mentions only four of the 54 countries, and none of these four is the reporter’s residence.

An Africa without leaders

Maclean’s article, like countless others in Western media, took place in an Africa without leaders, without public health officials or activists. It it set in a vacuum of knowledge and strategy. No epidemiologists, infectious disease specialists, no academics, no local journalists or medical associations were quoted. Just a vast maw of African horror, witnessed only by the brave souls at the United Nations and the Africa bureaus of Western papers.

Western media have a well-documented skew towards negative coverage when discussing Africa. One study found that in a 40-year period of reporting on African issues, an average of 73% of New York Times articles provided decidedly negative images. This is not without consequence. The Times is very influential, often referenced by papers all over the world when writing on international events.

Moreover, the Times has a demonstrable influence on government and private sector responses to disasters and other crises. Each appearance in a Times article corresponded to an additional $52,000 in humanitarian aid for victims of the 2004 Tsunami in South Asia, for example.

There is at least one industry invested in the repeated emphasis of disaster in Africa, and moreover in the idea of Africans being ill-prepared and in need of rescuing. There are currently at least 2,461 NGOs in Africa, and there’s money to be made and soft power to be expanded. Times articles on African issues that cited African leaders, individual nations and experts from local universities would bring into question the massive amount of aid being funneled “to Africa” via international aid agencies.

The New York Times, in its insistence on portraying Africa as a place of failure and no leadership, participates in the White Savior Industrial complex, the NGO pyramid scheme and any other manner of systems that keep nations from the Global North in positions of dominance over their “former colonies.” The only information about Africa that is worthwhile must come from foreign sources. Africans are not expected to reflect on their crises or learn from their past experiences. The only valid data comes from NGOs, whose reports simultaneously present data and ask for more donations.

A wealth of public health knowledge

There is a decided refusal to acknowledge the actions of nations like my native Botswana, which, through strict lockdown measures instituted as early as February 2020, managed to keep Covid deaths to 45 by January 2021 (when the Covid article was published). You heard me: 45 total deaths in a span of 11 months. This in a nation once reported to have the world’s highest HIV/AIDS prevalence rate per capita.

It should be obvious that the very prevalence of pandemics and disease mean that many African nations were extremely cautious and quite aware of the fragility of healthcare systems in general, and often able to convince citizens to take Covid seriously much faster. There is a wealth of public health knowledge the continent has to offer.

It astounds me that so few Western authors were able to make this connection: While Western countries were paralyzed by the arrogance that those sort of diseases don’t come here, with heads of state referring to the Covid virus as “China virus” and shutting down borders to Asia, before any conclusive evidence was shown that the virus originated there. Many European countries took months before they closed entry to the US, actually the world’s most infected country, while African nations took that step as early as March 2020.

Rather than acknowledge such a reality, the Ruth Macleans of the world prefer to devote precious column space to the idea that Africans can’t count. It appears that even as the US healthcare system is brought to its knees and exposed as a hollowed-out shell of its former self, the country’s media need a world where Africa can produce no solutions, can give no knowledge and is devoid of the power to positively influence the trajectory of the world. It appears the maintainers of these structures would rather die superior than live as equals.

The post NYT’s Africa: A Place of Failure and No Leadership appeared first on FAIR.

This content originally appeared on FAIR and was authored by Siyanda Mohutsiwa.