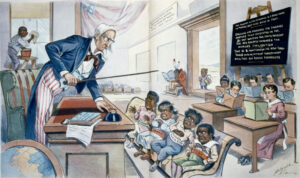 I may well be among the few people here who’ve only recently come across Robin DiAngelo’s immensely popular book, White Fragility: Why White People Have Such a Hard Time Talking About Racism, but I’ll share a few of my reactions. In my opinion, this book starkly epitomizes the dangerous consequences when discussions of white identity are divorced from class analysis. After George Floyd’s death at the hands of the Minneapolis police, Di Angelo’s “antiracism” training manual ascended to the top of Amazon’s best seller list. The author is a white, liberal, female sociologist who specializes in wokesplaining about whiteness to other whites. She coined the term “white fragility” in 2011 to mean the immense strain — in her words, they suffer a “a meltdown” — produced when whites are called out on their racist attitudes and behavior.

In what has become a highly lucrative cottage industry, DiAngelo facilitates diversity training workshops and in addition to elite university administrations and government agencies, her clients include corporations like Nike, Goldman Sachs, Coca-Cola, CVS, Levi Strauss & Co, W.L. Gore (makers of Goretex) Google, Under Armour, Netflix and American Express. She was even a guest on The Tonight Show, where host Jimmy Fallon was reverential and gushing in his praise. DiAngelo has reportedly made over $2 million off her book and 60-90 minute talks reap up to $30,000, a two-hour workshop $35,000 and half day events, $40,00. Tickets to her public presentations range up to $160 and you can engage in telephone correspondence with DiAngelo for $320 per hour. In 2020, her three homes were reportedly valued at $1.6 million.

Just 10 days after Floyd’ death, Nancy Pelosi introduced DiAngelo’s Zoom address to 184 Democratic members of Congress in what was designated a “Democratic Caucus family discussion on race.” For Democratic Party leaders and corporate PR departments, consultants of DiAngelo’s ilk are a wet dream of how to address racism because, as Bhasker Sundara rightly asserts, “The more that blame can be shifted to individual ‘Karens,’ the less onus is on powerful corporations, and the politicians who defend them to make real change in our system of racialized capitalism.”

I’m reminded of Rhyd Wildemuth’s observation that “White people who identify more with their whiteness over their material conditions, protect the capitalists (most of whom have the same color of skin as them). Identifying instead with their material conditions and their history of displacement would show them they have more in common with poor black people than they ever will with the rich.”1 Of course, the ‘white race” isn’t real; it doesn’t actually exist. We know that prior to the Enlightenment, people saw themselves as members of a clan, tribe, religion or geographic region. Europeans didn’t think of themselves as “white people” until it emerged from the confluence of settler colonialism and the artificial contraction of “whiteness.” In The Price of Admission, in 1985, James Baldwin wrote: “White people are not white: Part of the price of the ticket is deluding themselves into believing they are.” And Dr. Gerald Horne adroitly depicts this transformation as follows:

All of sudden when crossing the Atlantic, in a narrow manner that would make Madison Blush, all are rebranded as ‘white’ which subsumes many of the tensions, ethnic and class among them, in a new monetized and militarized ‘identity politics’ of whiteness based on expropriation of the indigenous and enslavement of the Africans. 2

This is not to suggest that the social construct of whiteness, its sociology, does not continue to have a real impact on real lives. Indeed, one would be hard pressed to find a better, consciously conceived and malicious identity than the white race. It’s the sleight of hand deceit that conceals the underlying brutality of our capitalist economic order.

In perusing DiAngelo’s book, which lacks an index, one searches in vain for the word “capitalism.” However, in an interview with Daniel Berger, published in the New York Times (July 15, 2020), DiAngelo abruptly volunteered that “Capitalism is dependent on inequality, on an underclass.” So why isn’t that included in her diversity training workshops? Because, she replied, “Capitalism is so bound up with racism. I avoid criticizing capitalism —I don’t need to give people a reason to dismiss me.” When asked for any reasons to be optimistic, DiAngelo mentioned NASCAR’S banning of Confederate flags and the renaming of military bases.

DiAngelo asserts that “racism is the foundation of our society” and because we all grow up in America’s deeply racist culture, all white people — no exceptions — are collectively racist, including younger people. Commenting specifically on the latter, she writes: “I’m often asked if I think the younger generation is less racist. No, I don’t.” (P. 50). What to do? According to her, after acknowledging one’s racism, the quintessential question for white people to ask themselves is: “How have I been shaped by society?” This explanation is deeply suspect because, as Michael Parenti has often reminded us, cultural explanations are all too often closer to tautologies than actual explanations. That is, the culture itself is what needs to be explained. Who created it and what were their motives? Those questions and their system destabilizing answers are off the table for DiAngelo.

In a widely circulated critique of DiAngelo’s training manual, University of Tennessee history professor, David Barber, succinctly zeroed in on the consequences of avoiding class analysis. I sense it’s a message we should emphasize in conversations with other white folks and it merits this lengthy quotation:

In response to my query on this topic, Michael Yates, an economist, labor educator, writer and editor at Monthly Review, put it this way:

White workers simply don’t want to fall as low as they think nonwhite workers are, not just economically but socially and politically.

That is, as bad as things are or might become, whites are not at very bottom of the pecking order where Black people are. Their fear is that their white status will be undermined by any African-American gains. Pitiful as it it, this may be as concise, revelatory and serviceable a definition we can put forward for white skin privilege.

Finally, by positing the ineluctability of white racism — the flat out futility of thinking that white attitudes can change — DiAngelo’s book uncannily dovetails with Afropessimism, an analysis most closely identified with Prof. Frank Wilderson and one that also further fragments and abandons the crucial necessity of solidarity and multi-racial struggle. I may by mistaken but by my reading, the latter neglects and negates Black agency in the present and future and also fosters the belief that white people are incapable of renouncing racism which, in turn, contributes to pervasive feelings of hopelessness. Needless to say, both schools of thought lend welcome camouflage to corporate elites and their willing enablers, in part, because racial capitalism depends on manufacturing this white ignorance.

The post A Few Thoughts on White Identity first appeared on Dissident Voice.

This content originally appeared on Dissident Voice and was authored by Gary Olson.