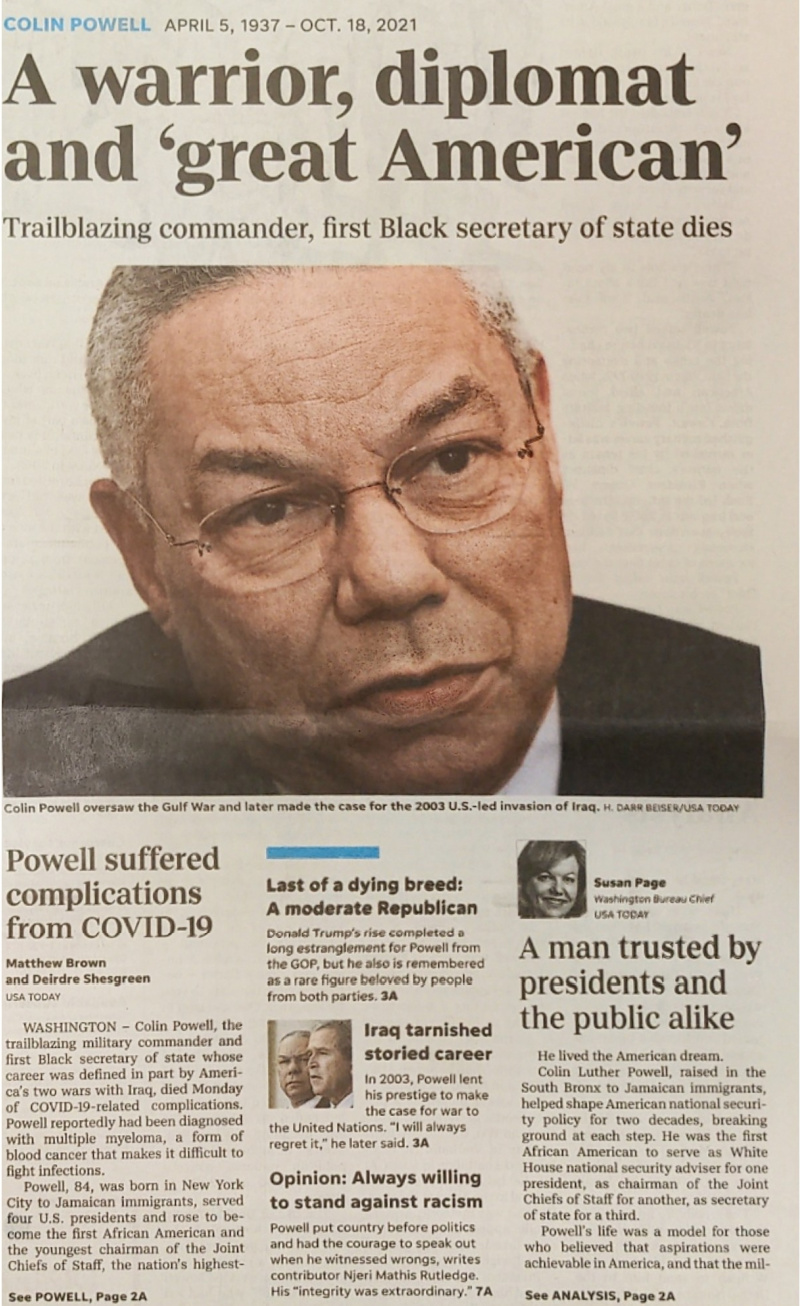 USA Today‘s front-page obituary for Colin Powell (10/19/21) called him “a Warrior, Diplomat and ‘Great American.” Accompanying stories called him “A Man Trusted by Presidents and the Public Alike,” and “Always Willing to Stand Against Racism.” The only hint of criticism was a story that said that “Iraq Tarnished [His] Storied Career.”

In the New York Times (10/19/21), Bret Stephens called Powell “an exemplary military leader and presidential adviser.” Stephens’ Times colleague Maureen Dowd (10/23/21) said Powell was “the best America had to offer” and a “great man.” Theodore R. Johnson wrote in the same paper (10/21/21) that “we should take inspiration from Mr. Powell’s accomplishments.”

Powell led, as David Ignatius tells it in the Washington Post (10/18/21), an “extraordinary life of service,” characterized by “a sterling career of public service.” Like Ignatius, Peggy Noonan of the Wall Street Journal (10/21/21) lacked a thesaurus, describing Powell as “a great man” and one of “the great ones.” In another Journal piece, Paula Dobriansky (10/20/21) called him “a true inspiration and a model not only for military leaders and diplomats but all Americans,” a “hero of our time.”

This gratuitous fawning deflects readers from reckoning with Powell’s record. Consider the heinous acts the “great man” admitted to carrying out in Vietnam.  (See Consortium News, 7/8/96.) In his memoir, My American Journey, Powell said of his unit in Vietnam: “We burned down the thatched huts, starting the blaze with Ronson and Zippo lighters.” The “hero of our time” wrote:

Why were we torching houses and destroying crops?  Ho Chi Minh had said the people were like the sea in which his guerrillas swam…. We tried to solve the problem by making the whole sea uninhabitable. In the hard logic of war, what difference did it make if you shot your enemy or starved him to death?

Similarly, Powell’s “sterling career of public service” involved obstructing the truth of US war crimes in Vietnam. After the My Lai Massacre, when Powell was an Army major posted in Saigon, he was tasked with investigating a soldier’s letter describing US barbarism against the Vietnamese (Columbia Journalism Review, 4/3/09). Powell denied the charges, writing, “In direct refutation of this portrayal is the fact that relations between American soldiers and the Vietnamese people are excellent.” 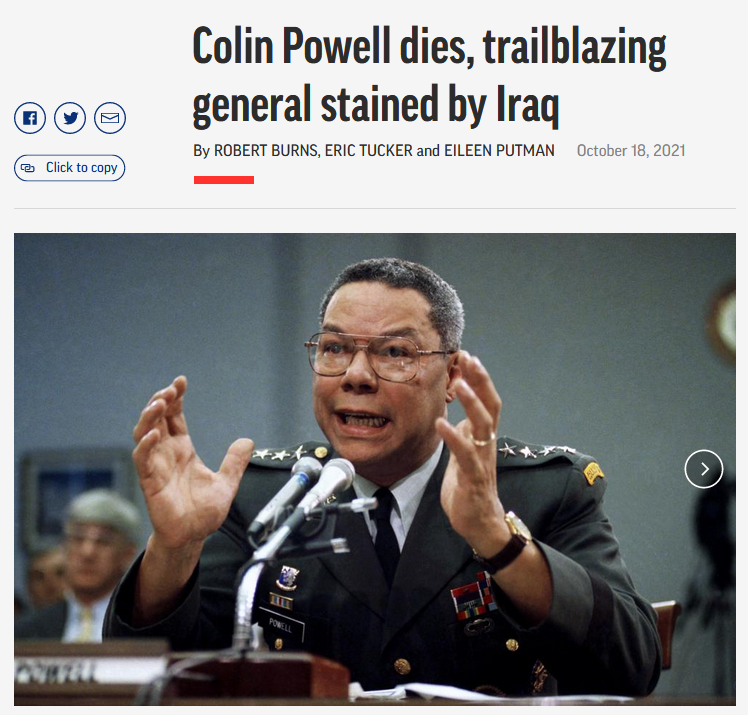 AP‘s obituary (10/18/21) described Powell as a “trailblazing soldier and diplomat whose sterling reputation of service to Republican and Democratic presidents was stained by his faulty claims to justify the 2003 US war in Iraq.”

The only aspect of Powell’s life that corporate media coverage of his death identified as a flaw with some consistency was the infamous 2003 speech to the United Nations, in which he helped sell the invasion of Iraq by falsely claiming the Iraqi government possessed weapons of mass destruction. Even on this issue, corporate media were soft on Powell.

Ignatius said that the case Powell laid out “turned out later to have [been] based on flawed intelligence.” Stephens claimed that the so-called evidence Powell put forth “had the full confidence of the intelligence community.” Dowd wrote that “Powell naïvely thought that he and his pal George Tenet could scrub his speech of all the deceptions shoehorned in by Cheney’s co-conspirators.”

These are lies about Powell’s lies, as a Jon Schwarz article for the Intercept (2/6/18) demonstrated three years back. The “flawed intelligence” behind what Powell told the UN wasn’t, as Ignatius wrote, something that “turned out later” to be wrong: Powell claimed that Iraq had bought aluminum tubes supposedly for their covert nuclear weapons program but, prior to the speech, his own intelligence staff prepared a memo that pointed out that this assertion was untrue. Powell said that the tubes were built “to a tolerance that far exceeds US requirements” for comparable conventional weapons, but the memo noted that this was false.

Nor did what Powell alleged at the UN have, as Stephens wrote, “the full confidence of the intelligence community”: Powell told the UN that “weapons experts at one [Iraqi] facility were replaced by Iraqi intelligence agents” so as to “deceive [weapons] inspectors,” but another memo from his intelligence staff pointed out that this statement was “not credible.”

That Powell kept these claims in his speech gives lie to Dowd’s attempt to portray Powell as doing his best to “scrub his speech of . . . the deceptions,” as does Powell’s active fabrication of evidence: Powell played an intercepted conversation between Iraqi army officers talking about searching ammunition dumps to make sure they weren’t accidentally holding onto banned chemical weapons, but he doctored  what they were saying in a way that made it sound like they were discussing the hiding of proscribed weapons (Intercept, 2/6/18).

Powell’s deliberate lies shatter the myth that he was a “reluctant warrior,” as the Times’ Eric Schmitt (10/18/21) put it, a talking point that Ignatius (Washington Post, 10/18/21) repeated. Powell described a satellite picture as showing “a decontamination vehicle in case something goes wrong,” one of the “sure signs” that Iraqi “bunkers are storing chemical munitions.” Yet, Schwarz showed, another memo from Powell’s intelligence staffed flagged this claim as “WEAK,” and noted that “decontamination vehicles—cited several times in the text—are water trucks that can have legitimate uses.” Powell may have had misgivings about the assault on Iraq at various points in the lead up to it, but a person who knowingly distorts the truth so as to help bring about an invasion cannot reasonably be described as a “reluctant warrior.” 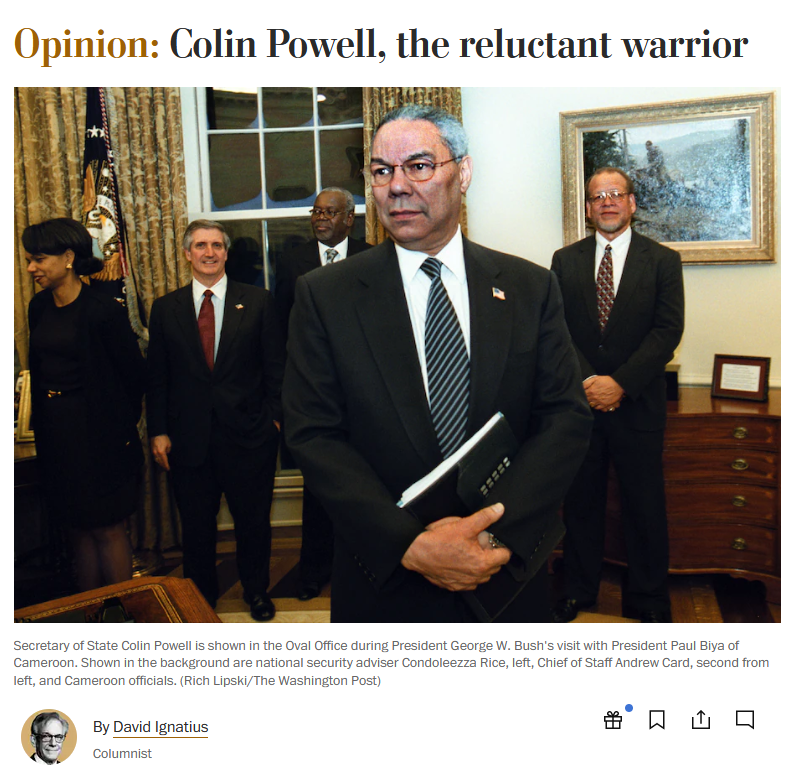 One of David Ignatius’ main examples (Washington Post, 10/18/21) of how Powell was a “reluctant warrior” was the 2003 invasion of Iraq that he played a pivotal role in selling—which Ignatius called “a painful ending to a sterling career of public service.”

The coverage of Powell’s death was silent on the consequences of other instances where Powell was quite the enthusiastic warrior. A Washington Post editorial (10/18/21) claimed that

successful military operations…—the Gulf War, the 1989 invasion of Panama—benefited from Mr. Powell’s insistence that their costs and benefits be thoroughly weighed and that, when used, force should be deployed swiftly and overwhelmingly.

Schmitt too mentioned both of these US aggressions—launched when Powell headed the Joint Chiefs of staff—and declined to say anything about their costs for Panamanians or Iraqis.

A proper count of the civilians Washington killed in its attack on Panama—which a UN General Assembly resolution called a “flagrant violation” of international law (AP, 12/29/89)—has never been tabulated, but estimates believe it to be in the thousands, with the Panamanian poor subjected to the bulk of the violence (Al Jazeera, 1/31/16). Shortly after the war, Physicians for Human Rights (PHR) found that the attack had displaced 15,000 people, and that at least 3,000 civilians were injured to the extent that they needed emergency treatment.

In the invasion’s aftermath, Human Rights Watch concluded that

American forces inflicted a toll in civilian lives that was at least four-and-a-half times higher than military casualties in the enemy, and 12 or 13 times higher than the casualties suffered by US troops. By themselves these ratios suggest that the rule of proportionality and the duty to minimize harm to civilians, where doing so would not compromise a legitimate military objective, were not faithfully observed by the invading US forces.

Thus, there are thousands of Panamanians who might demur from the Post characterizing the war as having “benefited” from Powell’s “insistence” on using US military might “swiftly and overwhelmingly.”

Somewhere in the range of 142,500 and 206,000 Iraqis died in the Gulf War, between 20,000 and 35,000 of them civilians. In one hideous incident, US forces bombed an Iraqi infant formula factory. At the time, Powell claimed that “it is not an infant formula factory…. It was a biological weapons facility, of that we are sure.” A UN investigation found that what he said wasn’t true.

The coverage was also quiet about other important aspects of Powell’s legacy, including his role in Iran/Contra, a policy under which the US armed Iran in its war against Iraq—which was the US’s principal ally in that war—helping to keep people dying in both countries. The US would use that money to arm the Contras, a mercilessly violent band of counter-revolutionaries in Nicaragua, to circumvent congressional legislation against supporting them.

The Contras were, as Human Rights Watch reported at the time,

major and systematic violators of the most basic standards of the laws of armed conflict, including by launching indiscriminate attacks on civilians, selectively murdering non-combatants, and mistreating prisoners.

sustain[ing] a force that has shown itself incapable of operating without consistently committing gross abuses in violation of the laws of war. The policy also has placed in jeopardy the holding of elections by encouraging Contra attacks on the electoral process.

Powell, by his own admission, “had a role in this [Iran/Contra] business.” As Robert Parry and Norman Solomon (Consortium News, 9/16/96), “It was Powell who short-circuited the Pentagon covert procurement system that otherwise would have alerted the military brass that thousands of missiles were headed to Iran,” which the US said it regarded as a terrorist state. Even after the fallout from the affair, Powell would continue fighting on behalf of the Contras, traveling to Central America with Contragate kingpin Elliott Abrams to deliver a message that US aid would be in jeopardy unless the guerrilla war against Nicaragua continued (New York Times, 1/14/88).

Earlier, in 1983, Powell was part of a supposed fact-finding mission to El Salvador that concluded that the US should keep training and lavishly funding the Salvadoran military, even though it had—with US assistance—massacred 600 people at El Sumpul and 1,000 at El Mozote, where half of the victims were under 12 years old (Democracy Now!, 10/19/21). A year after Powell’s visit, the Salvadoran military massacred 80 non-combatants in Cabanas province and at least 50 displaced persons in Chalatenango, in both cases “raping and murdering peasant women and systematically executing unarmed civilians” (AP, 3/28/85).

Not ignorance but indifference 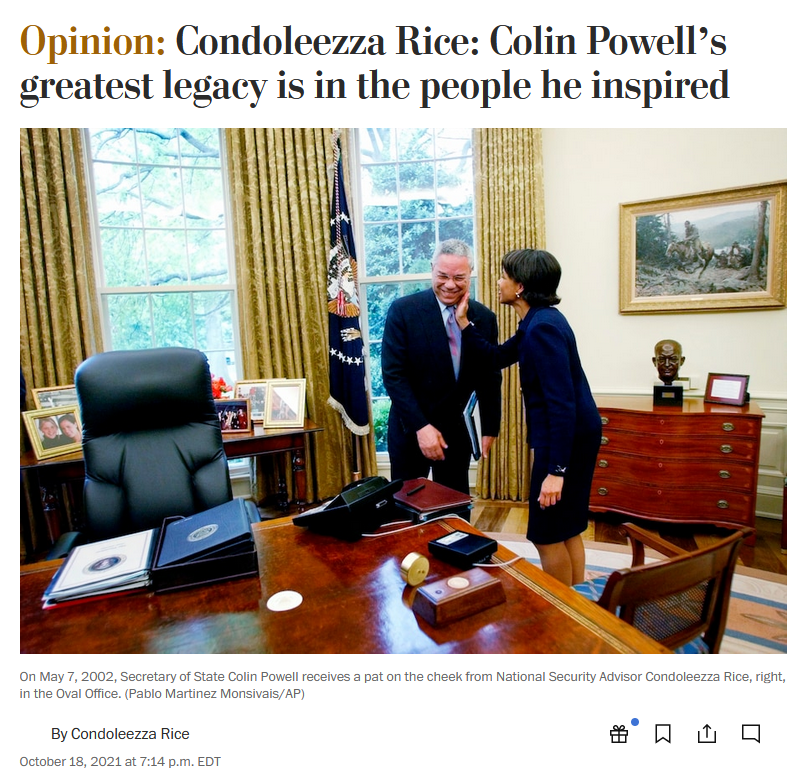 Taken together, the obituaries suggest that it’s not that corporate media journalists don’t know about the blood Powell helped shed; it’s that they think it’s all well and good that he did. Thus, the Post’s editorial board can assert that his “mistakes” were “outweighed by his accomplishments,” without fretting over some torched Vietnamese homes and efforts to starve Vietnamese people to death. He can be called “a great man” and a “hero” because the people who write such things are indifferent to piles of corpses in Latin America, or think  that their murders were justified.

If these outlets found the deaths of hundreds of thousands of Iraqis objectionable, they wouldn’t fill their pages with praise for one of the people most responsible for the deaths, nor would they have had him eulogized by co-conspirators like Condoleezza Rice (Washington Post, 10/18/21) and Karl Rove (Wall Street Journal, 10/20/21). Lionizing someone who, like Powell, should have stood trial for war crimes, will—if left unchecked—prime the public to admire the next batch of would-be war criminals…rather than stopping them.

The post The Media’s Lies About Colin Powell’s Lies appeared first on FAIR.

This content originally appeared on FAIR and was authored by Fairness & Accuracy In Reporting.